Optics for photographing degree of polarization?

It's relatively common practice in photography to use a polarizing filter to get rid of reflections from non-metallic surfaces. Usually you just put this filter in front of the lens and rotate it manually to take pictures with your desired polarization

Comparing with and without the filter, you would get something like below (from wikipedia).

So my question is: are there some optics that you can attach to a camera to directly give you an image of the degree of polarization? Ideally the optics would be portable, and require only a single exposure of the camera with minimal post-processing.

Some ideas I had:

This electronics.se post is relevant, though it's not clear if a solution was found, https://electronics.stackexchange.com/questions/198607/electrically-switching-between-horizontal-and-vertical-light-polarization. I don't really care about financial cost, just if a convenient solution exists that is reasonably attainable

optics polarization
Share
Improve this question
asked May 18 '19 at 7:24

Yes, it is possible to design optics to record the full polarization state of an image (monochromatic) in a single exposure. A very straightforward way would be to substitute for the single lens in a camera, an array of four lenses to form four separate images of the same scene on a single photodetector array. In front of the four lenses you would place a vertical linear, horizontal linear, right circular, and left circular polarizer respectively. There are some variations on that theme, all accomplishing essentially the same thing.

Measuring the polarization of incoming light can indeed by achieved by essentially taking four separate pictures by mechanically rotating filters, or by having four different cameras with distinct optical paths for each polarization.

However, a true single component solution seems to have been just developed by a team of engineers just this past year using a monolithically integrated meta-surface grating, which does all of the optics in a single go. See the paper here: https://science.sciencemag.org/content/365/6448/eaax1839

This is the true solution to my question, as they provide a single optical element that is placed into the camera optical system to get the full Stokes matrix. Once commercialized, this optical component can be easily added to any existing camera, with some caveats regarding working optical wavelength discussed in the paper.

Edit: it seems there is a commercial product that functions in the same way, "Polarsens" by Sony. There are on-chip lenses and polarization filters so that each group of four pixels measured 0,45,90,135 degree polarization. 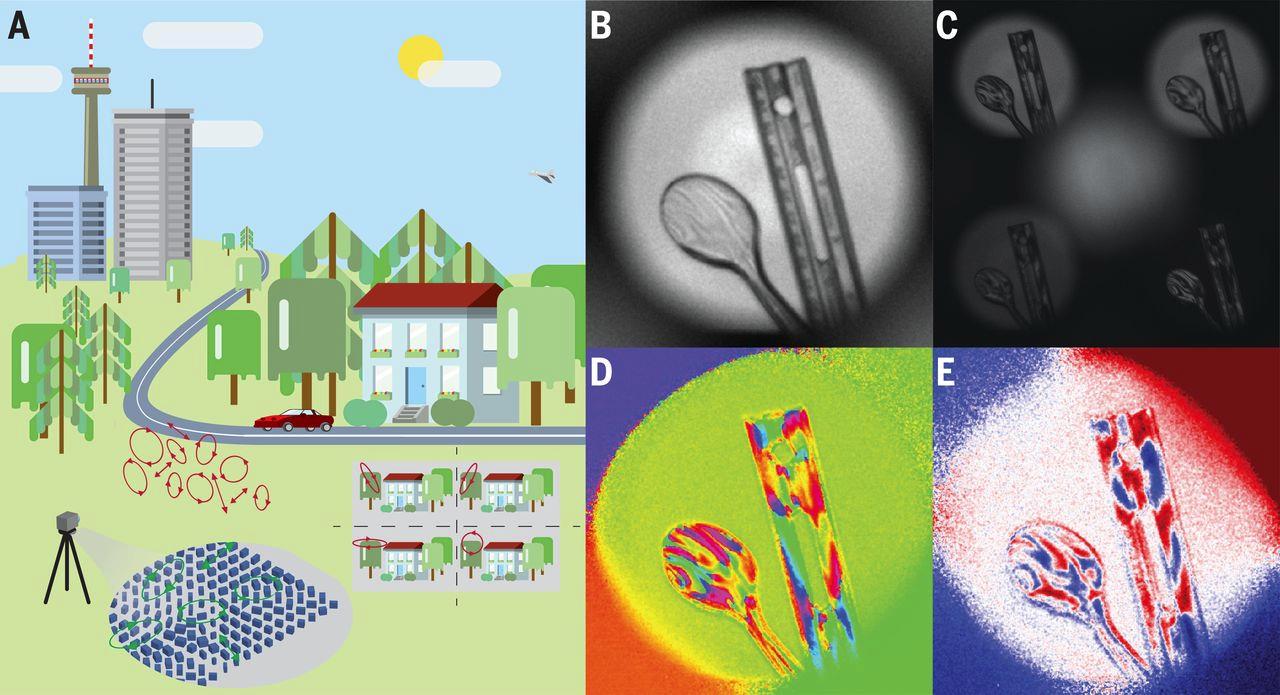 5
Optical explanation of images of stars?
1
How to better view LCD through polarized glasses
5
How is light able to pass through more than one polarizer
3
What is the likely source of these interference/noise patterns in my DIY laser micro-projector?
2
How could I build a polarizer for 12GHz electromagnetic waves?
6
Circular polarizers change the color of linearly polarized light
6
Polarization lost upon 2nd reflection?