Many questions have been asked on this site about the Stern-Gerlach experiment, but as far as I can tell this one hasn't. Does the following classical explanation of the SG experiment work?

Model electrons as a finite-sized hollow sphere of rotating charge $e$. Immediately after entering the SG device, the dipole moment of the electron quickly reorients itself to align with the magnetic field of the device. This is what I would expect to happen if a small bar magnet were placed in a region of high magnetic field gradient. Suppose this happens before the electron has traveled 1% of the distance of the device. Then, for the remaining 99% of the distance in the SG device, the electron is completely oriented either "spin-up" or "spin-down," so the binary "all-or-nothing" measurement is naturally predicted by this classical picture.

This would also work to explain sending the beam through multiple differently oriented SG devices, since the previous spin orientation of the electron is completely altered (very quickly) each time the electron enters a new device.

I don't think I was clear enough about the overall point of the question, since a few people have now brought up the fact that the spherical electron model has issues. I'm aware of that, but not really concerned with the specific electron structure model, so much as why some classical model wouldn't work to describe the binary output beam behavior (which knzhou gave a very nice answer to).

Perhaps a better hypothetical classical model would be: A classical point-particle with intrinsic angular momentum / magnetic dipole moment, the correct gyromagnetic ratio (supposing this could be a tunable classical parameter for point-particles), and some "braking mechanism" that allows it to quickly align with a magnetic field and stay aligned.

I think this question matters because the SG experiment is often used as a pedagogical example of quantum mechanics in introductory courses. When I first learned QM, I remember being confused about why this example was supposed to be so convincing, since it seemed that there could exist classical explanations of it.

It's a decent question, as many people probably thought the same when the Stern-Gerlach experiment was first released. But there are many hurdles if you try to explain it classically. To get you started:

This is also ignoring the issue that permanent magnetic moments can't even exist in classical mechanics.

First, in the Stern-Gerlach experiment, a beam of silver atoms was used, and not a beam of electrons. Secondly, the interpretation of data at that time (1922) based on the classical equations of motion. It is assumed that the silver atom has a magnetic moment on which the force acts

The role of quantum mechanics is reduced to the statement that the magnetic moment in equation (1) is quantized in proportion to the angular momentum or spin. In this form, the theory of the scattering of atoms in a non-uniform magnetic field was used to solve practical problems related to the determination of the magnetic moment of atoms using the Stern-Gerlach method down to the present time. As it is known, Stern and Gerlach obtained the following figure of silver atoms (on the left without a magnetic field, on the right in a magnetic field) 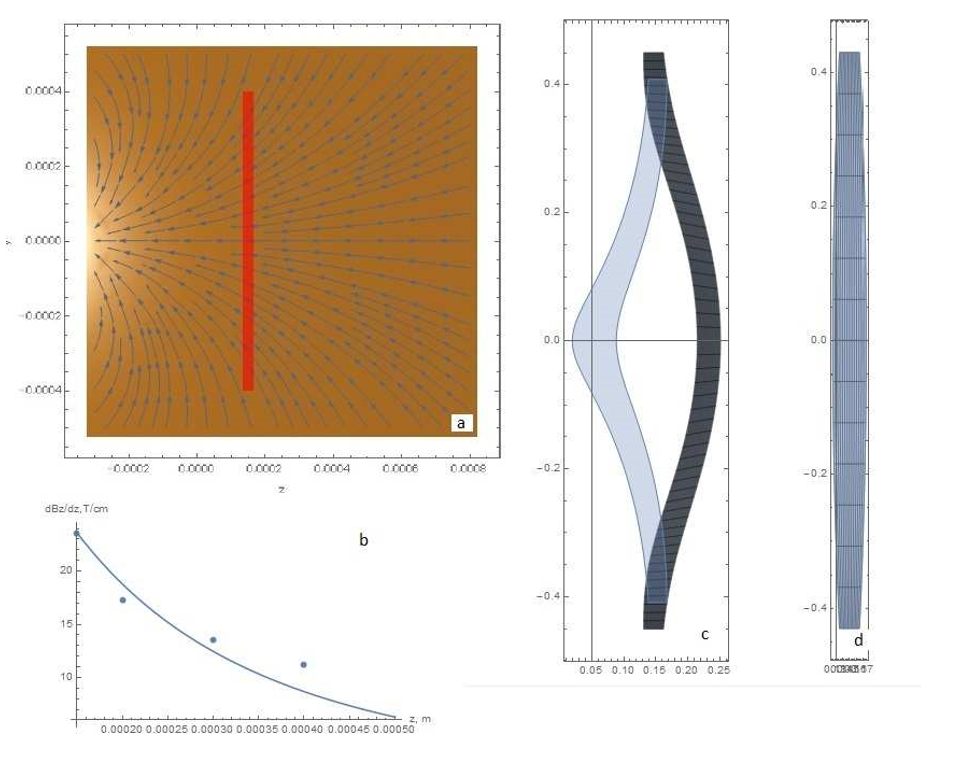 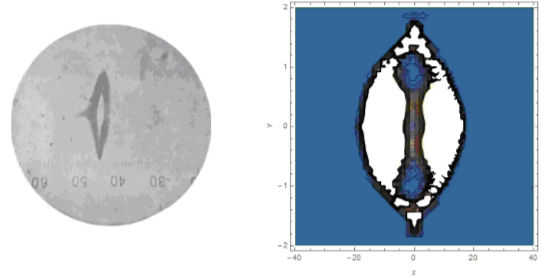 Modeling the electron as a finite-sized, spinning, charged spherical shell doesn’t work. Among a variety of problems, this model predicts the wrong value for the electron’s magnetic moment.

Consider a spherical shell of mass $m$, charge $e$, and radius $a$, spinning at angular velocity $\omega$. Its moment of inertia is

and its magnetic moment (in Gaussian units) is

The angular momentum is

and we know that for an electron this is $\hbar/2$.

We can then express the magnetic moment as

But the magnetic moment is measured to be slightly greater than twice this value.

There has been a recent demonstration of a Stern-Gerlach atom interferometer with high accuracy control of magnetic gradient on an atom chip (https://arxiv.org/pdf/1801.02708.pdf). Any attempt to picture the magnetic moment as a classical dipole pointing in a certain direction will fail to explain the interference pattern observed (see Figure 2 in the paper).

There are semiclassical equations of motion that fully explain the Stern-Gerlach experiment, see e. g. Section 5 of Gat, Lein & Teufel, Annales Henri Poincaré 15, 1967 (2014). It is important, though, that in this approach it is not the individual trajectories that matter, but averages of an ensemble of initial spins (which are obtained from a generalized Wigner transform of the quantum spin state). And this is how quantum mechanics comes into play, because only states from quantum mechanics give you a consistent interpretation.

Not the answer you're looking for? Browse other questions tagged quantum-mechanics classical-mechanics angular-momentum quantum-spin .