Tension in string due to two opposite forces [duplicate]

Ask Question
Asked 1 year, 2 months ago
Active 1 year, 2 months ago
Viewed 267 times
1
$\begingroup$
This question already has answers here:
Why I think tension should be twice the force in a tug of war (10 answers)
Stretch length of horizontal and vertical springs (3 answers)
Closed last year.

If you attach a ideal string to a wall and pull it with force F, there should be a tension T=F in the string. And the string will apply force F on the wall too.

It's the latter; the second person is just acting like a wall.

To consider it another way, if you apply a force $F$ to the rope, and the other person holding it applies less than $F$, there will be a net force acting on the them + you + rope system, causing a net acceleration of the whole system. When forces are equal, the tension of any point in the rope can be said to be equal to the balanced tension forces acting on each side of the rope.

The other man indeed acts like the wall. As both the men apply the same force in opposite direction, our whole system is in equilibrium. Now, consider the free body diagram of the leftmost end of the string. That point is being acted upon by F on left and tension T on the right (we will not consider force F by the other man as in a FBD we always draw the forces directly acting on the particle). As acceleration is zero, F and T balance each other.

The wall, being a wall, is not moving.

You are correct that:

the string will apply force F on the wall too.

So it must counteract the tug of the rope by the same amount, F, to not move.

This is the whole principle of equilibrium.

In conclusion the free-body diagrams of the two situations look identical:

Shouldn't the tension in the string be 2F since both persons are applying force in opposite directions?

If you have two, equal but opposite forces at each end of the string, there will be no acceleration. Think about the game of tug of war. You have persons at each end of the rope pulling with equal but opposite forces $F$ so there is no acceleration of the rope. The sum of the external forces on the rope is zero. But tension is an internal force. You know its there because if you cut the rope, the contestants will go flying. 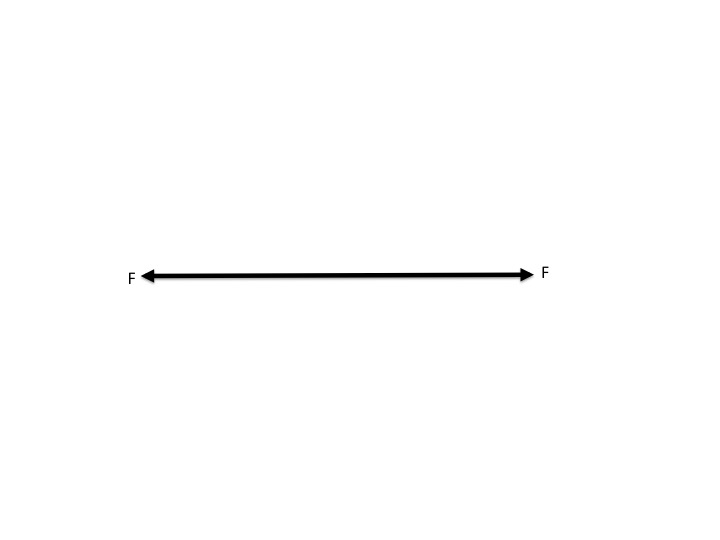