If current through a resistor is zero, does the circuit break?

electric-circuits electric-current electrical-resistance capacitance
Share
Improve this question
edited May 16 '19 at 14:46
Vivek Yadav
asked May 15 '19 at 13:30

I learnt that there's a resistor attached across the capacitor.

The situation you are describing is one where the resistor is in series with the capacitor and a source of electrical potential, say a battery. See the circuit diagram below which shows a battery, switch, resistor, and initially uncharged capacitor (no initial voltage on the capacitor).

Eventually the build up of charge on the capacitor will result in $V_{C}=V$. From the previous equation that means $I=0$, that is, as you say “When the capacitor is fully charged, the current doesn't flow through the resistor anymore, as there's no potential difference across it”.

Since the current is now zero, the voltage across the resistor which equals $IR$ is zero. 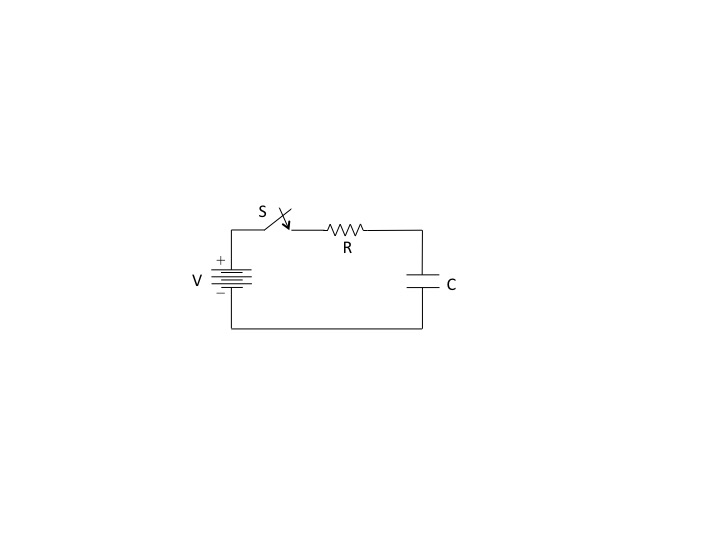 The voltage over the resistor is the difference between that over capacitor and the voltage source, that is, zero. The circuit is closed but the two voltage sources cancel out.

Are we talking about a capacitor and a resistor in parallel? Then it is the other way around:

At this filled stage, there is a potential difference (voltage) across the resistor just as there would be of the capacitor wasn't present. A filled capacitor has no influence on a DC circuit and can be considered a hole in the circuit (infinite resistance).

Not the answer you're looking for? Browse other questions tagged electric-circuits electric-current electrical-resistance capacitance or ask your own question.