How bright was the universe after Big Bang during photon epoch?

I'm going to assume that you're human, and hence that the brightness you're interested in is the optical wavelength region, i.e. around $\lambda\sim550\,\mathrm{nm}$. The peak of a Planck spectrum shifts toward higher frequencies the higher the temperature is, and hence the ratio of optical-to-UV/X-ray/gamma radiation will decrease. But regardless, the absolute brightness will always increase at any wavelength for larger temperatures.

In other words, ten seconds after the Big Bang the Universe was a trillion times brighter than looking at the Sun.

Today, the spectrum of the Universe is no longer a Planck spectrum, but is given by a mixture of cosmological and astrophysical processes. In this answer about the cosmic background radation, you can see that the brightness of the optical peak is roughly two orders of magnitude dimmer than the CMB peak brightness which, in turn, from Planck's law today has a brightness $\sim10^{24}$ times smaller than at $t\simeq10\,\mathrm{s}$. "Optical light" is here defined as a much broader region than what a human would see is, very roughly ten times as broad, so the perceived brightness would be another order of magnitude lower. Hence, today the Universe is 27 orders of magnitude less bright than at the photon epoch.

Brightness and color through the history of the Universe

The figure below shows, in green, the brightness of the CMB as a function of time after the Big Bang. A secondary $x$ axis on top show the corresponding temperature of the Universe. The background color shows the color of the Universe as would be perceived by a human being, calculated by convolving the spectrum of the radiation with the response function of the human eye: The first few tens of thousands of years, the Universe is a pale sapphire blue, turning white as it reaches the temperature of the Sun ($T_\odot \simeq 5\,780\,\mathrm{K}$). At $t\sim200\,\mathrm{Myr}$, stars begin to form and the calculation of the spectrum becomes more complicated (so I've grayed it it out), but today the Universe has reached a cosmic latte (Baldry et al. 2002). Note that, as mentioned above, only between $t\sim1\,\mathrm{Myr}$ and $t\sim6\,\mathrm{Myr}$ — where the temperatures was $1600\mathrm{K} \gtrsim T \gtrsim 500\mathrm{K}$ — could you actually see anything; prior to this epoch you'd go blind, and after this epoch, it'd be too dim (but you could in principle still see the color using sunglasses/binoculars, respectively). 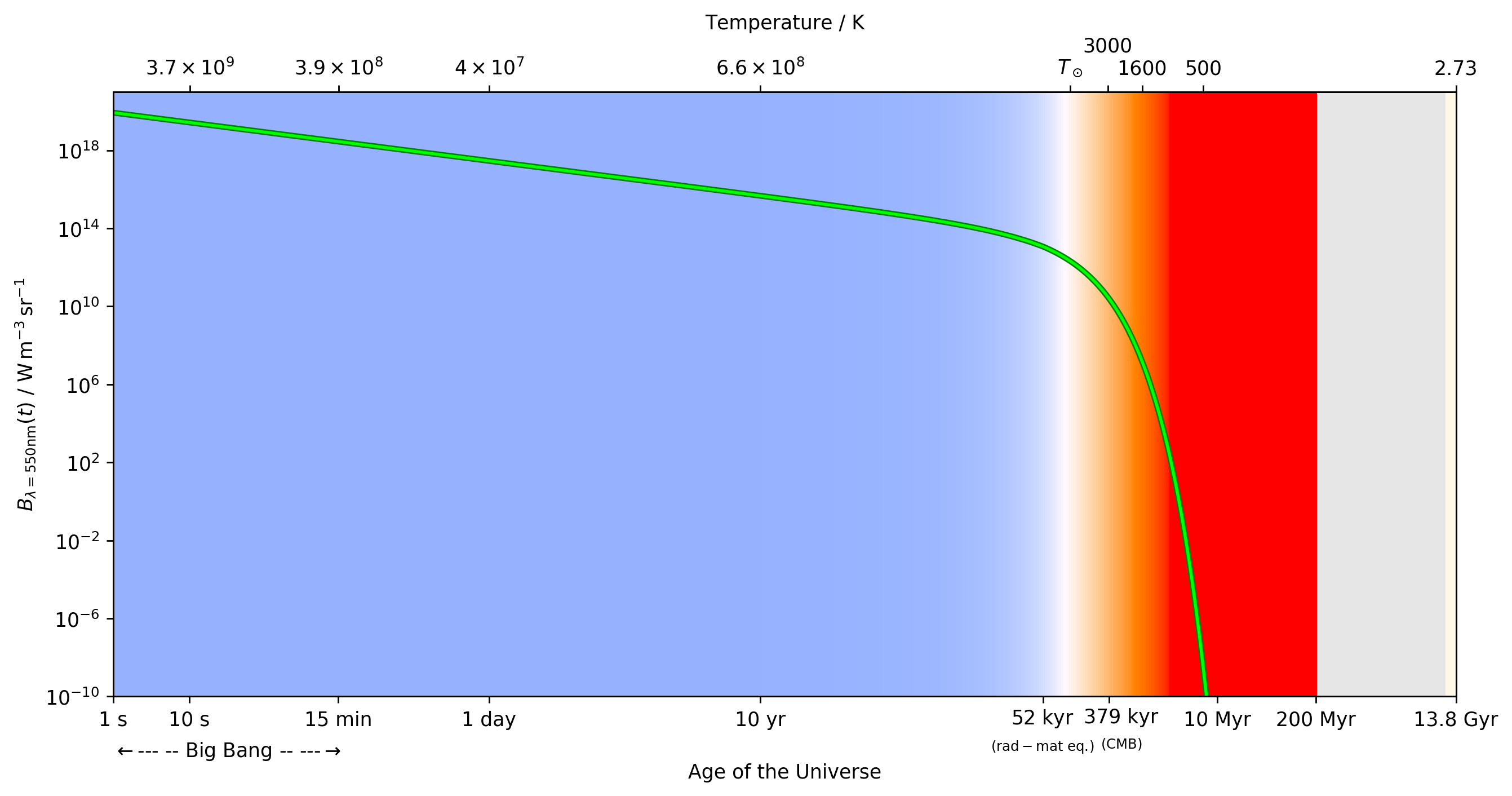 At $T\lesssim hc/\lambda k_\mathrm{B} \simeq 30\,000\,\mathrm{K}$ the exponential factor in the Planck law blows up so the brightness at $\lambda$ quickly decreases. The brightness is further decreased by the fact that, at $t\sim52\,\mathrm{kyr}$, the Universe transitions from being radiation-dominated to being matter-dominated and so the expansion goes from $a(t)\propto t^{1/2}$ to $a(t)\propto t^{2/3}$, i.e. faster.

A note on decoupling and mean free path

Before the photons decoupled from matter, they scattered frequently on free electrons, so their mean free path was small compared to the size of the (observable) Universe. It is often said thad the Universe was "foggy" until decoupling, but I think people often overestimate this fogginess. The mean free path is $\ell = 1 / n_e \sigma_\mathrm{T}$, where $n_e$ is the number density of free electrons and $\sigma_\mathrm{T}\simeq6.65\times 10^{-25}\,\mathrm{cm}^2$ is the Thomson cross section of the electron. Calculating $n_e$ from the ionization state of the gas, this works out$^\dagger$ to roughly 2000 light-years just before recombination begins to kick in at a time $t\simeq200\,000\,\mathrm{yr}$ after BB, 20 light-years at $t\simeq50\,000\,\mathrm{yr}$ when matter started dominating over radiation, 16 kilometers at $t\simeq15\,\mathrm{m}$ when nucleosynthesis ended, and 20 meters at $t\simeq10\,\mathrm{s}$, when leptons and antileptons annihilated and the photon epoch began.

But this scattering is not really important for how bright the Universe were. Photons arrive at your eye all the time, and if they have scattered multiple times from their point of origin, you won't know where they were created, but you will still see them.

$^\dagger$I wrote a Python code called timeline to calculate $\ell$ and other quantities of the Universe as a function of time, available on GitHub here.

As far as I know, the universe was opaque due to the presence of an extremely dense plasma (caused by the extreme temperature and the correlated high-energy collision between particles). Therefore the universe was basically a "soup" of matter through which light couldn't propagate because of diffraction (think of a extremely thick fog). This state lasted for ~300 000 years, when the temperature was low enough to permit the formation of atoms, which let loose all of the e.m. waves in a huge initial flash of light. After that there was again complete darkness since no stars or other light-emitting objects had formed yet. (Once again, that's AFAIK)

Edit: Typo + got rid of a repetition because it bugged me.

Not the answer you're looking for? Browse other questions tagged visible-light cosmology temperature universe big-bang or ask your own question.

13
Spectrum of CMB vs. duration of last scattering
12
When they say that the universe cooled after the big bang, where did the heat go?
0
Did light already experience death of the universe immediately after the Big Bang?
1
If temperature is dependent on mass, how did the early universe have a temperature?
2
Dark age of the universe
85
What does one second after big bang mean?
1
Why temperature gets so hot a fraction of seconds right after big bang?
0
In Big Bang Nucleosynthesis (BBN), why aren't anti-protons created and destroyed?
3
Does whether or not inflation occurred change the estimated age of the universe?