How do lens capture reflections clearly?

In an optical system which uses lenses (cameras, our eye) multiple rays from the same point are conveyed in a single point on the retina / image sensor. This is typically shown as in the image below.

However, while this is valid for diffuse light which is spread in all directions and is roughly of the same perceived color, I was wondering what happens with light which is reflected instead. Look at this image with a mirror: 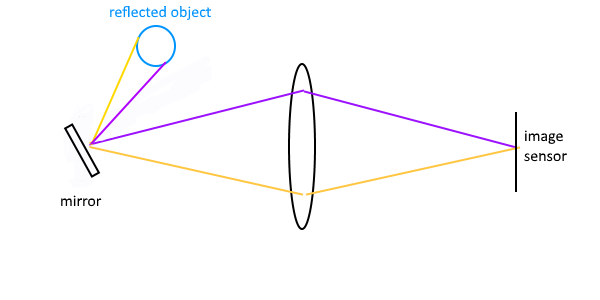 The lensmaker's equation, with the refractive index assumed to be a constant, covers that situation.

A correct way to draw rays from a point object reflecting from a mirror and then proceeding through a lens to focus at an image is like this:

A lens will act on a reflected object as though it were a real object at the mirror's virtual image point.

The whole point of an "image", in the sense of optics, is that it is a configuration of light rays that are geometrically identical to those released (whether by emission or by reflection of other rays) from a real object at some position in space, and thus will act in every way like they actually came from that object, whether they did or not, and that includes also distance and focusing.

That means if a lens is not set/made to focus on an object at the position for the image point, the image in the mirror will be blurry. This is why that, if you have myopic eyes, looking at a mirror doesn't help you see anything any more clearly. Conversely, if it is so set up, it will capture in just as clear by the identical mechanism - optically, it forms a second image of the first image.

In your diagram, the individual rays are not "the same" - but what you have to look at is the pattern of rays. You might also want to - faithfully by the laws of reflection - draw a few other rays from the object that don't converge at a point. In fact, the two rays you have drawn (assuming you drew correctly) will form geometrically similar shapes, in particular, the two "cones" that are formed, the one from the object and the one from the mirror, are geometrically similar, which means they have the same shape, i.e. configuration, just different sizes, and thus the latter cone meets the criteria already to be part of the image of the object, faithfully 100% good true as should be the case for an ideal mirror.

You can prove this by showing the vertex angles of the two cones are equal, which is quite easy to do from the law of reflection: $\theta_I = \theta_R$. The outgoing angles for the two rays are the same as the incoming, thus their sum, which is the angle in between, will be the same, hence the cones are similar.

(By the way, the "images" on your computer monitor are, in fact, thus somewhat different from the optical images formed by a mirror. In particular, their light rays, released by emission, are equivalent to those that would come from a flat piece of paper bearing a drawn picture, instead of a three-dimensional object, which is why that your monitor does not convey any "depth" information to your eyes beyond illusory perspective formed by line/surface angles and shading interpreted through your brain's visual perception system with its repertoire of natural and acquired depth cues. Releasing light rays that carry three-dimensional information from an object stored as computer data is a rather challenging problem - technologically, this application is called "volumetric displays" and they still are an active area of research.)

Not the answer you're looking for? Browse other questions tagged optics visible-light reflection lenses or ask your own question.

3
Light-matter interaction and an object's appearance
3
Why farther objects do not look dimmer?
0
Why are two rays required for us to see an image?