Can post-selecting on the screen in the Delayed Choice Quantum Eraser experiment be used to predict the quantum-eraser measurement results?

I'm curious about QM and spent the last 3 days thinking about Delayed Choice Quantum Eraser (DCQE) experiment, but I couldn't solve this issue:

So, am I missing something or QM is just that weird?

quantum-mechanics quantum-entanglement quantum-eraser
Share
Improve this question
edited May 14 '19 at 22:32

You're over-interpreting these sketches - they are only sketches, and their specific details can't really be used to make any real predictions.

Here is a more accurate version of those sketches, with a proper underpinning on a solid model of the experiment's behaviour: 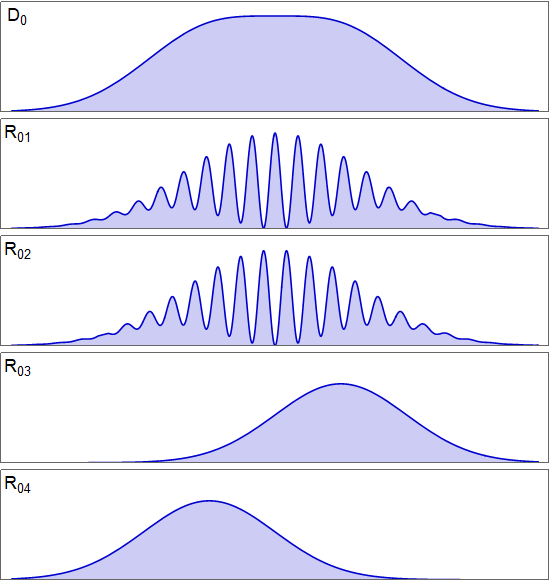 Still, you're not entirely wrong, particularly in the sharper formulation you give in the comments:

Isn't it true that the patterns made by the particles that reach R01-04 follow distinct distributions on D0? If so, it seems reasonable to extrapolate that there are some regions that are inverse peaks for D1/D2

This means that you can zero in on one of the peaks of the $R_{01}$ fringes, say, the green box below: 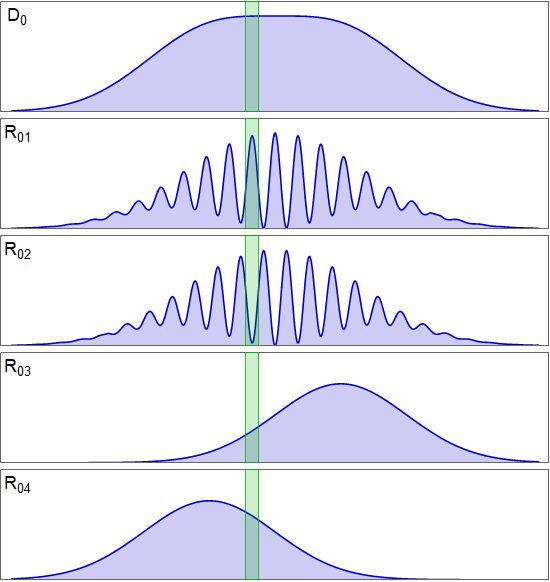 If use some fancy switching mechanism to ensure that you send all the particles that fell on that green box over to the $D_1$/$D_2$ quantum-eraser part of the idler-photon side of the experiment, then indeed, as you say,

it seems much more likely that they reach D1 than D2.

Is this a problem or a contradiction? No. The photons are not going through an arbitrary half-silvered mirror - they're going through a precisely calibrated beam splitter. The beam path that reaches $D_2$ includes a contribution from $M_b$ (red beam) and a contribution from $M_a$ (blue beam), and if those beams are coherent, they can interfere both destructively and constructively. Absent any information about what happened to the signal photon on $D_0$, the idler and the signal are entangled, and there is zero relative coherence between those two beams, and $D_2$ will click half the time. However, by post-selecting on $D_0$'s measurements on the green box, you're effectively fixing the phase between the two beams in such a way that they interfere destructively on the $D_2$ side (and constructively on the $D_1$ side), so no light goes through to $D_2$ (on those post-selected runs).

So, basically, what you've described is a fancy way to run the quantum-eraser apparatus in reverse, where by splitting the $D_0$ screen into sectors you're providing information that can be used in a post-selection scheme to recover the interference pattern that comes out of the BS$_\mathrm{c}$ beam splitter.

If that seems weird, then yes,

QM is just that weird.

Not the answer you're looking for? Browse other questions tagged quantum-mechanics quantum-entanglement quantum-eraser or ask your own question.

1
Quantum eraser: How does photon detection in an interference pattern “dark spot” not affect the state of the remaining photon?
2
What Prevents Delayed Choice Quantum Eraser Experiment from Being Used to Predict the Future?
0
Signal photon patterns in the Delayed-Choice Quantum Eraser experiment of Kim et al
1
Why do we need a lens in the delayed-choice quantum-eraser experiment of Kim?
0
If I know in advance I'm getting an interference pattern, wouldn't I have time to remove the splitter so the which-path information would be know?
1
Delayed eraser experiment (Kim experiment)
0
Why Delayed choice quantum eraser doesn't produce two lines