When magnetic flux is in opposite directions and cancels out, forming “null points”, does that mean there is repulsion?

In some arrangements of magnets it may be hard to see if there is repulsion or attraction. For example with two bar magnets, opposite polarity, side by side, it is easy to tell that there is attraction between the poles, but if there was repulsion along the sides that would be "hidden" by net vector of attraction. In general, if magnetic flux is in opposite directions and cancels out, forming "null points", does that mean there is repulsion? If applied to image below, are the magnets, weakly, repelling one another at that null point? Or is that assumption completely wrong? 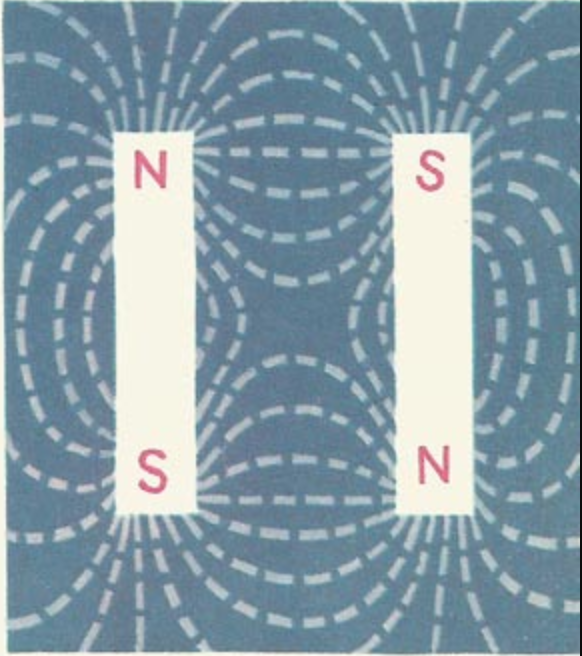 Note, this question was slightly similar to other question, has been narrowed down. Tried to ask it as precise as possible. Feel free to link to slightly related questions, or you could also provide an answer.

It's not really appropriate to use the term "force" unless it is associated with a massive object, as in $F = ma$, or with something like spring compression or string tension.

In the situation you've described, the magnetic field at the "null" point is not acting on anything. If you were to measure the field strength at that point, e.g., by observing a moving charged particle there or by placing a magnetic dipole there, you would of course determine that the field strength there is zero.

There could be some misunderstanding of what's going on at that "null field" point. It kind of looks as if the field lines are repelling each other there, but that's not really what's happening. At every point in the field, the net field strength and direction is simply the vector sum of the field strength and direction of all the sources in the surrounding space. When that vector sum is mapped out, the map looks like field "lines", but the lines are not objects or even a substance like gas. They are more like lines drawn perpendicular to the contour lines in a topographic map.

12
How do permanent magnets manage to focus field on one side?
0
How can there be ball magnets?
3
Why don't the poles of a magnet meet in the middle?
2
Reversing magnet polarity to increase/decrease Eddy currents?
0
Bar magnets side by side, opposite polarity, repulsion at null point?