Why are solar panels kept tilted?

First, not every solar panel in India is oriented towards the south or tilted at 45°. One of the world's largest photovoltaic power stations is installed in Kamuthi (9.3°N, Southern India), with pv modules tilted at 8°. 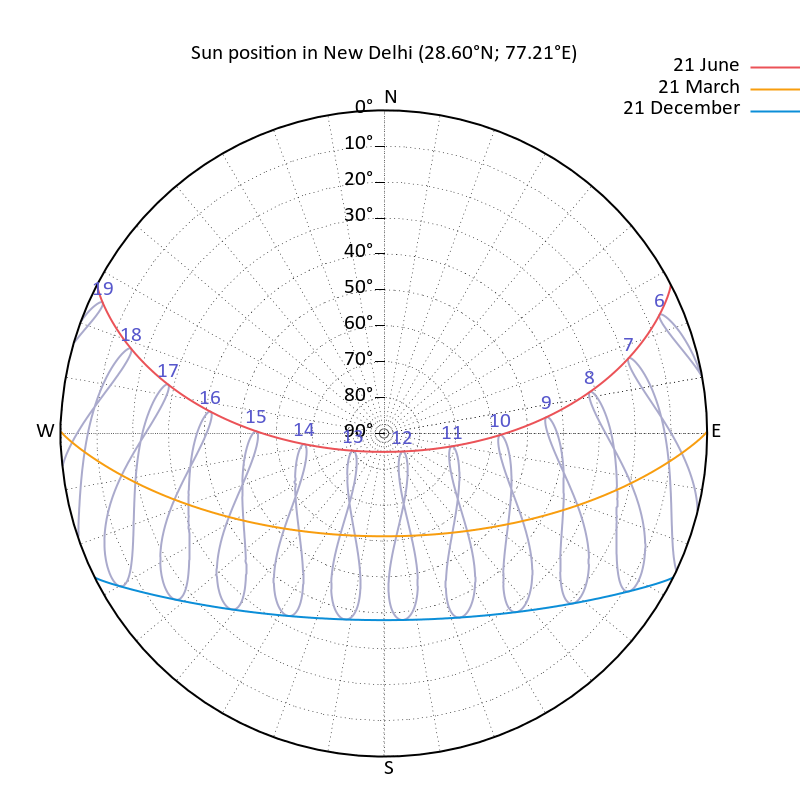 When solar panels are installed on buildings, they sometimes have to be integrated directly in the roof, so the orientation will be dictated by the architecture. 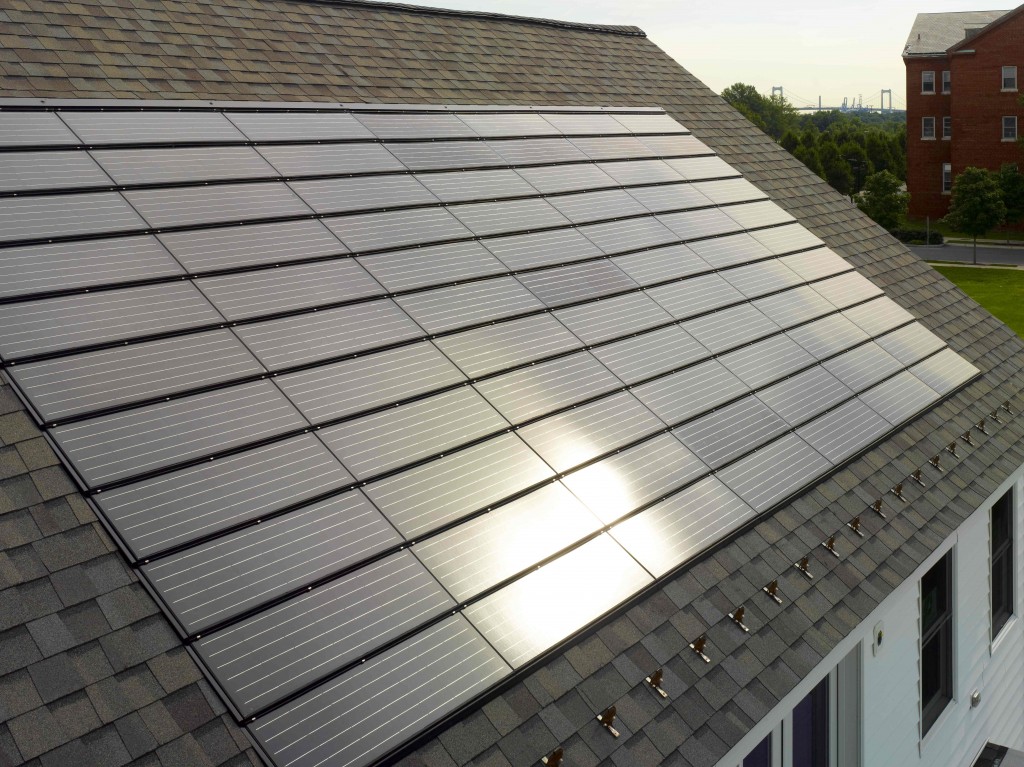 Depending on whether the electricity will be used on location, stored in batteries or sold to the grid, it might be interesting to produce less electricity per year but to produce it when it is most useful, e.g. during the afternoon for air conditioning. In that case, solar panels could be turned towards the west.

Finding the best tilt angle is a compromise :

45° tilt seems to be too high in India for photovoltaic panels:

It could be about right for hot water production:

Finally, this angle might have been dictated by architectural choices.

Here's an average irradiance vs tilt diagram for New-Delhi (28.6°N):

Here are contour lines for yearly insolation vs orientation in New-Delhi: 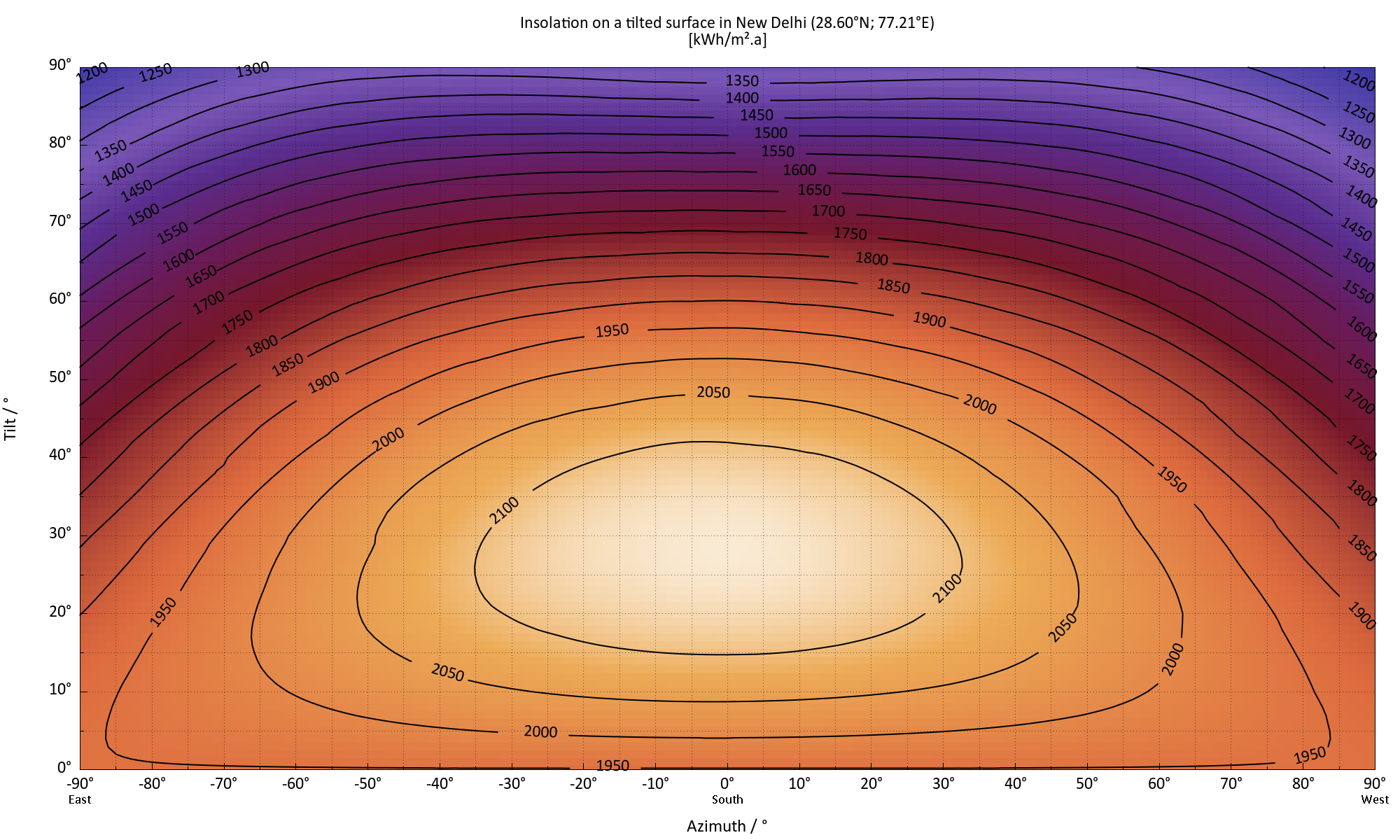 Unsurprisingly, the orientation with the highest yearly yield is towards the South with a tilt between 25° and 30°, for an insolation of almost $2150\mathrm{\frac{kWh}{m².a}}$. 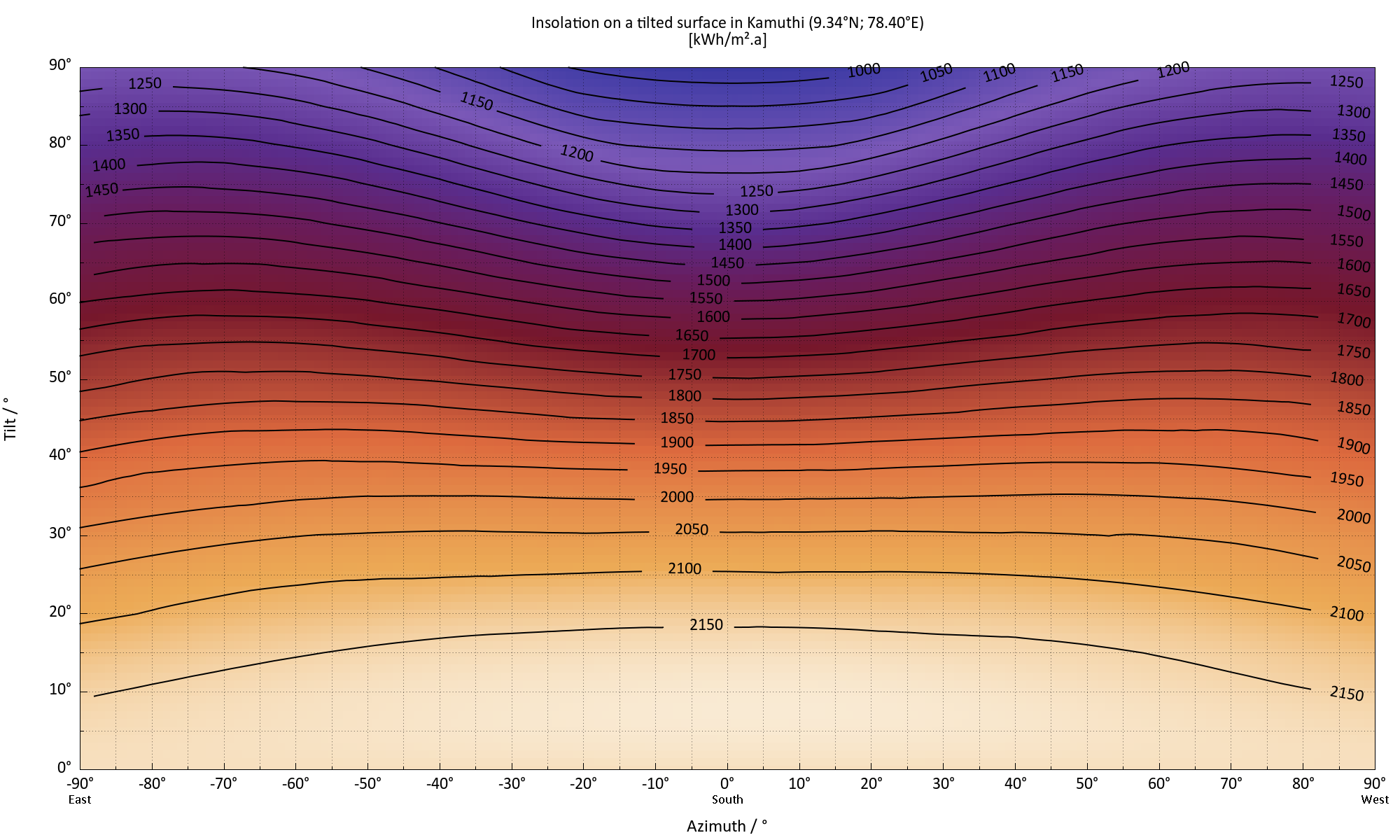 Cleaning issues aside, the best orientation of a solar panel is the one that maximizes solar exposure.

It can be fixed or change periodically if a motor mechanism is provided. If it is static, then it can be horizontal assuming the latitude of the location is close to the equator.

Since India is near the equator, there is no reason to tilt southward except the one you mention (cleaning).

For other locations: same rules, maximize sunlight unless there are issues regarding cleaning. So if you go to the northern hemisphere, the farther north you go, the more the Sun will spend time southward in your sky, so you want to incline your panels accordingly. In the southern hemisphere, this is just the opposite. If you own a car, the panels can be horizontal on the roof or if you can move them and camp, the rules above apply.

Also the farther you are from the equator, the more the planet tilt will have an effect on seasonal variation, meaning even less Sun during the winter, or more during summer than during the rest of the year, i.e. a position farther or closer to the vertical, respectively. If the panels are used occasionally or can be moved, you want to aim at the sun anyway.

The basic principle is that you make sure your panels face the Sun as much as possible during the period of time of your interest. Since the Sun spends as much time in the western as in the eastern part of the sky, whatever the latitude, unless for example there is a building producing shadows that would require you to compensate, it should not tilt either westward nor eastward.

You can see more on angle variation here: https://www.solarpaneltilt.com/

Its because the sun is never quite in the same part of the sky during the year. Different tilts will generate more energy at different times of year - eg a report for the island of Sark gave 2 tilt options: 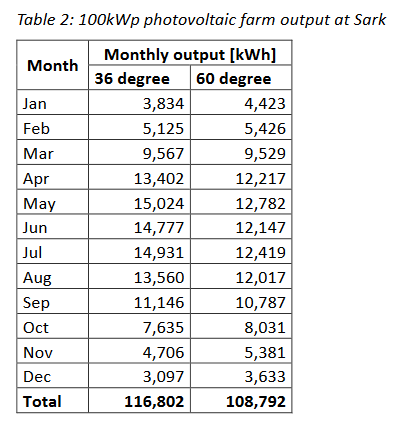 So 60 degree tilt gives more in winter, but less in summer, with a small loss of total efficiency. No doubt India is different for solar generation, but that could be why panels are tilted like they are.

Not the answer you're looking for? Browse other questions tagged thermodynamics thermal-radiation renewable-energy solar-cells or ask your own question.