How exactly does artificial gravity work?

A spaceship which uses centripetal rotation to create artificial gravity. 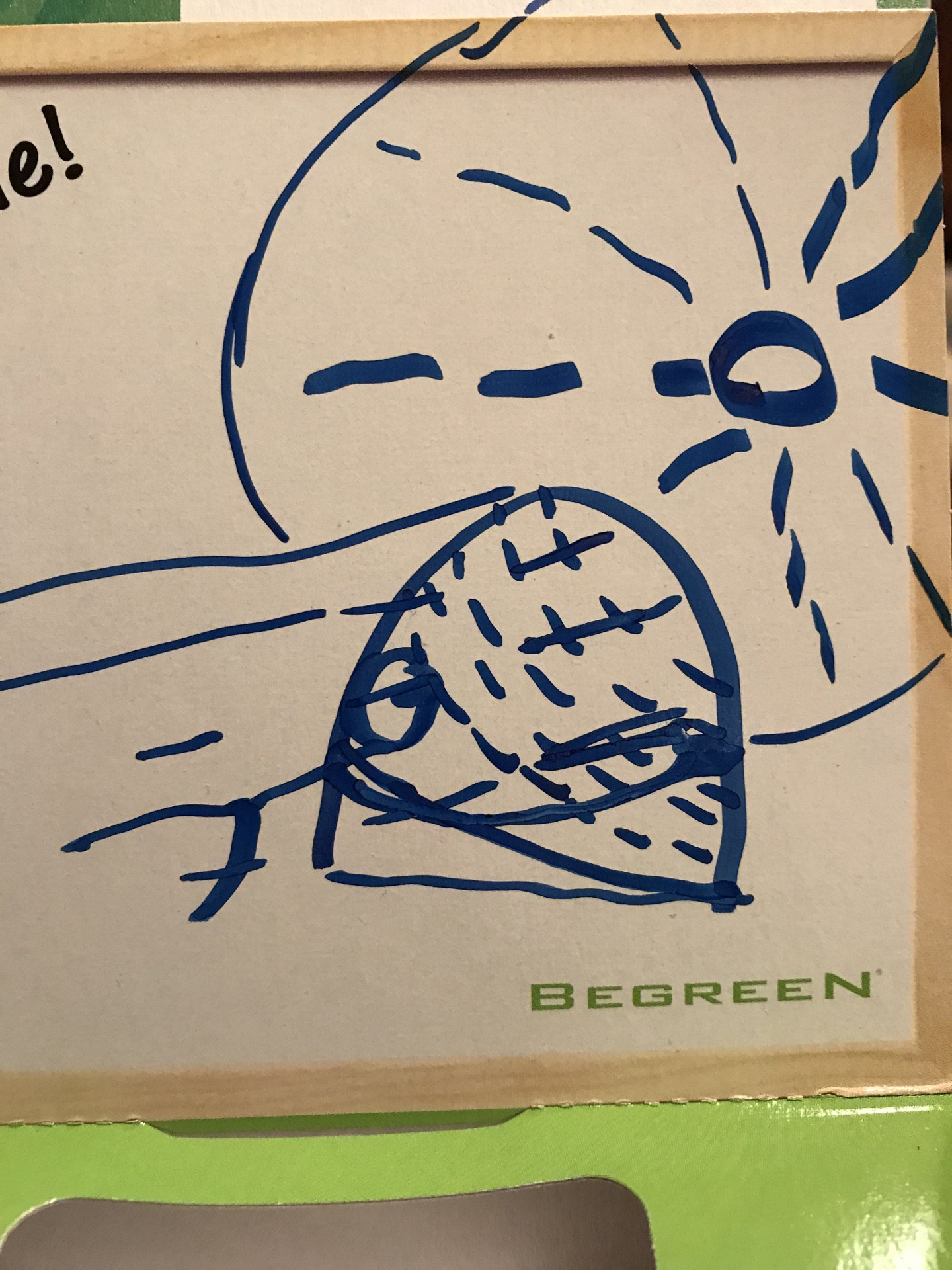 (Sorry for the poor drawing :(, I should mention that the opening is connected just to the edge of the spinning living section so that this window is almost perfectly centered around this spinning living space) If you think of this living space as a circle he is in the center (the door).

Description: Person coming from the 0-gravity part of the ship about to enter the centripetal rotation large living space. But doing so from a high point... Would they be Superman?

If you were in a zero-gravity environment (e.g., in earth orbit or in a coasting trajectory en route to Mars), alone in your space suit, you would feel no gravity.

If a big pipe were placed around you in your zero-g environment, you would still feel no gravity. The pipe would have no effect on you at all.

If the pipe were spun with you inside it but not in contact with it, you would still feel no gravity, because you and the pipe would not be interacting. It makes no difference whether the pipe's spin rate is steady or accelerating.

However, if you moved to the spinning pipe's inside surface and grabbed hold of it, you would feel yourself first yanked by whatever you were hanging onto (because after all it is moving relative to you), and then you would feel yourself being pressed against the inside surface of the pipe. This is for the same reason that a rock swinging around in a circle on the end of a string makes the string taut: centripetal force exerted on the rock by the string tension causes the rock to move in a circle instead of fly off at a tangent.

From the above you can see the answer to the third part of your question: If you are floating in zero-g and enter a spinning chamber, you are not attracted to the walls of the chamber. To someone pinned to the wall by centripetal force, watching you enter the chamber, you will a) seem to be rotating, and b) float like Superman.

2) At the center, you would feel no acceleration, no centrifugal force.

3) The farther from the center, the stronger the centrifugal force. It grows smoothly as you move outward.

Lots of good answers for the title but not the enumerated questions.

The angular rotation can be constant, but even at a constant speed it is still accelerating.

They would feel no gravity at the center.

It would be similar to being lowered down into one of those fast spinning carnival rides (example pictured). Grabbing onto it would be a similarly unpleasant experience. 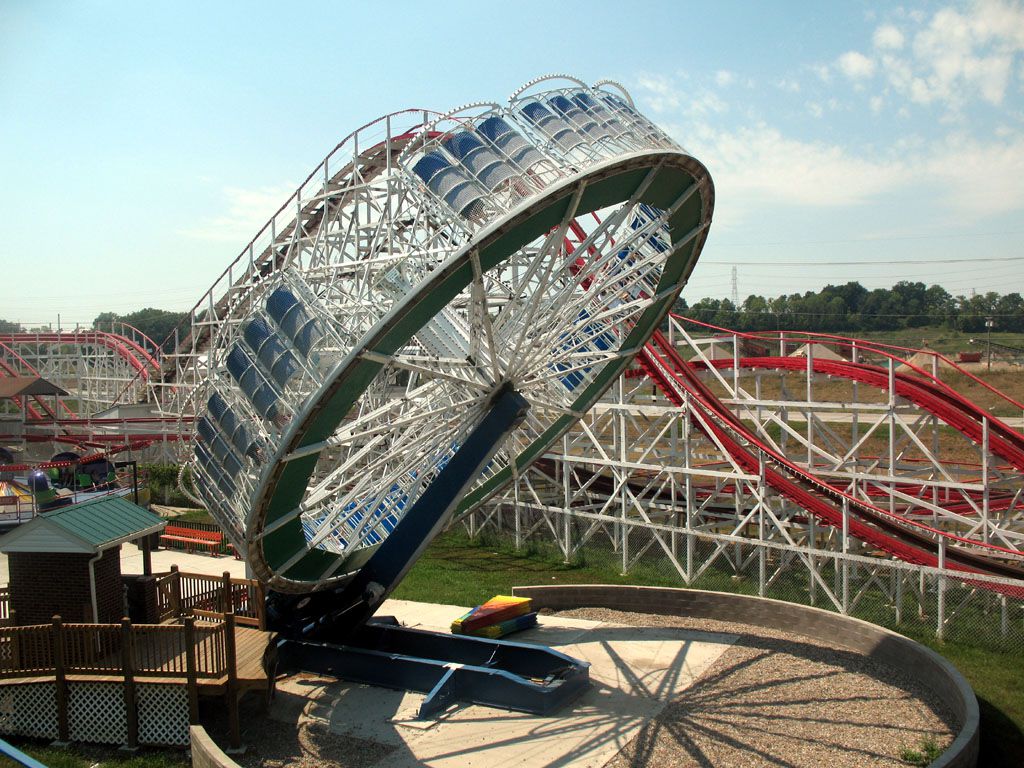 Ever tried to rotate a bucket by tying it with string and filling water in it?

If you do it you will find that if you swung the bucket with enough speed the water won't spill on you, but as you stop rotation the water spills out (depending on position of bucket).

Somewhat similar process is going on here too.

You will have artificial gravity till the wheel is rotating, as soon as it stops the artificially induced gravity also drops to zero.

The centripetal force is usually denoted by $F=m\omega^2r$.

You can see as the radius $r$ increases, the force on you will also increase. Hence when you are at the centre of wheel you face no force.

But as you start moving outwards the force increases in terms of $r$ (radius) assuming the angular velocity $\omega$ of the wheel is constant.

So in case you had a ladder to move on the wheel, you would feel that the artificial gravity you are facing (which is nothing but centrifugal force) is also increasing as you are descending on ladder.

Hence in this case your astronaut ( I suppose this is outer space) will not feel anything when he goes from zero gravity to spinning region.

Condition? He enters from the centre.

In case he enters from some other point on wheel he won't feel anything but as soon as he touches the rotating wheel (which is going to hit him hard) he will feel the artificial gravity.

Simulated gravity occurs because an acceleration is being applied. If you are in contact with the rotating portion of a rotating-drum style artificial gravity spacecraft, you are being carried along a circular path, which means you are constantly accelerating towards its axis of rotation, so you "feel gravity". When you are not in contact with the rotating drum, without any other interactions, you would be in non-accelerating uniform motion - you would be weightless. What happens next depends upon the relationship between your velocity vector and that of the ship you are in. If the velocity vectors are identical, you would appear to be floating/flying, depending on the observer's frame of reference; to someone moving with the drum, you would appear to be either flying in a circle or hovering at its axis. If the velocity vectors are not identical, you'll at some point run into something in the ship; your path will be linear, but it won't appear so to an observer rotating with the drum because his true path is curved due to the drum's rotation.

If you were on the inside surface of such a rotating drum and started running really fast in the direction opposite the rotation, you would reduce your effective rotation rate and consequently the radial acceleration and the simulated gravity acting on you. You would feel lighter. If you ran as fast as the drum's tangential velocity, you would effectively bring your rotation rate to zero and become weightless. You could take off ad "fly" like Superman. This assumes you can run as fast as the tangential velocity of the drum. See here for a calculator. For an artificial gravity spacecraft to be practical and comfortable, you'd want close to 1g and a low rotation rate (less than 2 rpm). That would require about a 225m radius yielding a tangential velocity of about 47m/s - no human could run that fast.

If you were standing on the drum's interior surface and jumped "up" (toward the axis), you would be momentarily weightless, just as if you jumped up from Earth's surface. In the spacecraft, the instant you break contact with the drum, you will have a vector of uniform linear motion which will remain constant (air inside might affect your motion a bit, but let's ignore that for now) until you make contact with something. You have a small radial component of motion (from jumping) and the tangential velocity you had at the point you broke contact with the drum. That net vector will intersect with the drum surface at some point. From the perspective of someone standing next to you at the point you jumped, it will look almost the same as if you jumped on the Earth's surface, except that you won't land at exactly the same spot on the drum.

To complement the other answers, I would like to answer number 2 and 3 in a scenario where there is atmosphere (or really, any gas) inside the sealed cylinder.

There are 2 important parts in this artificial gravity: the outer wall rotation, and the inertia of the "falling" bodies/masses. If there is no tangential inertia of the inside bodies in the direction of the rotation, there is no feeling of gravity. Thus, if you consider there is air in your space ship: