If you have two resistors $R_{A},R_{B}$ connected in parallel with a battery, you can find the current that flows through one resistor ex.$R_{A}$ using the current divider rule:

As far as I understand, this rule holds because the voltage drop in each resistor is equal to the total voltage of the source $V_{T}$, but why do I find books that apply it even if it is not? Take for example this circuit: Why does the rule apply for finding the current that passes through $R_{2}$ for example, even though its voltage drop isn't equal to the voltage of the battery? 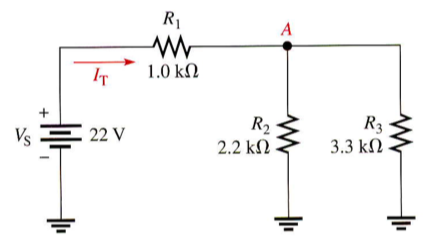 electric-circuits electric-current electrical-resistance
Share
Improve this question
edited May 10 '19 at 7:16

$V_A = V_B$ hence by Ohms Law, $I_AR_A=I_BR_B$, which you already have as your first equation, $I_A = \frac{V_T}{R_T}$, since the circuit can be redrawn as a circuit with equivalent resistance like so: 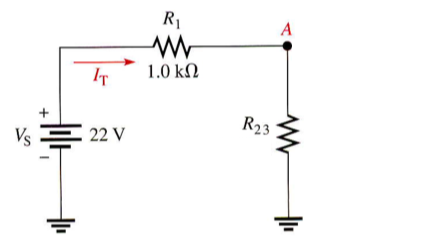 You can then apply Ohms Law again again, substituting $\frac{V_A}{R_A} = \frac{\frac{V_T}{R_T} R_B}{R_A+R_B}$, and work your way through it to find the current through one resistor from the voltage drop and the resistor's contribution to the total resistance...

8
Current in series resistors and voltage drop in parallel resistors
2
Resistance and current
0
Why do resistors always cause a voltage drop equal to the voltage of the battery
1
Using superposition to find current
4
Voltage divider: Voltage drop at first resistor
0
Does the potential difference across a resistor depend on current?
0
Kirchhoff’s Loop Rule doesn’t apply to an entire circuit?