Why can't a spaceship accelerate for ever? Since there is no friction in space

I have seen many answers like: because we don't have infinite energy, because of gravity, because it is impossible, because of physics.

But they don't really answer my question.. I mean if there is no friction and at some points, even if just in theory, you could be so far away from other objects or at the right distance between many so that the total force vector is null... why is it still considered impossible?

EDIT: Even if spaceship accelerates for ever, it's velocity with respect to other objects will never exceed light speed $c$. Proof is given below.

Let us consider the following problem:

The spaceship starts at time $t=0$ from Earth and is moving with constant acceleration $w$ in it's rest frame. Find the distance of the spaceship from Earth in the Earth's reference frame.

This is a well known problem from special relativity theory. The answer is as following:

The chart below illustrates the dependence of distance from time (blue line): 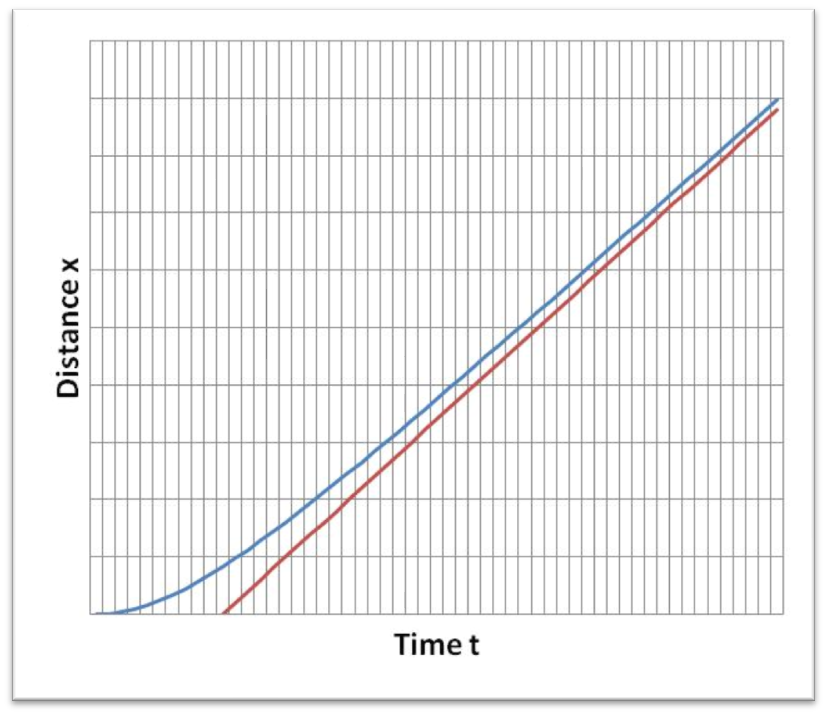 You can also see the red line on the chart. This is to demonstrate that after time $t=\frac{c}{w}$ even the laser beam sent from Earth would not be able to catch up with the spaceship.

Two points that may help

1 For the purposes of that statement I include photons in the set of "something".

Indeed, as you realise, there is no friction in space.. well, there is a tiny bit, because space is not 100% empty, it has trace amounts of dust, hydrogen and radiation. But this dust will not cause any significant drag unless you move really fast relative to the dust (say, at a significant fraction of the speed of light)

The problem is that since, space is so empty, there is really no practical way to have energy available for propulsion unless you carry it with you as fuel. There have been some proposals that try to work around this severe limitation, as the Bussard ramjet, and the laser light-sail proposed by Robert Forward: the first tries to use the hydrogen available in space as fuel, while the other captures a very powerful laser in a super-lightweight sail and accelerates by the momentum imparted by the light

If the ship carries the fuel, it means that the energy spent for acceleration needs to be used not only accelerating the payload, but also to accelerate the fuel mass that you are carrying with you! This leads to something called the rocket equation, which relates the density energy of your fuel, the ratio between the mass of the fuel and the payload, and the final velocity that you can achieve

The resulting analysis of the rocket equation shows that for fuels like hydrogen chemical combustion with oxygen (which is the most efficient chemical fuel we have) we are really bounded around the 300 sec (this is an unit called ISP, which measures how efficient is your fuel to produce kinetic energy)

If you consider other fuels, like nuclear fission reactions, or nuclear fusion, you can get more interesting efficiencies. For instance, the Daedalus project, developed on the seventies, proposed a interstellar starship to reach 5 light years in a trip of 80 years using fusion pellets as the fuel.

Beyond that, Eugene Sanger studied using antimatter-matter reactions to propel a spaceship. Such fuel would be theoretically the most efficient fuel physically possible in our universe, since the resulting reaction converts the full mass-energy of the particles in radiation (according to the formula $E=m c^2$), this has not been deemed practical in the foreeseeable future, because creating anti-matter fuel is inefficient and expensive, but more importantly, because it is extremely non-trivial to store the fuel safely inside a physical container, in such a way that can be used to propel a rocket ship.

Although these are good answers on why man-made ships will hardly ever perform as a eternal or even long-term acceleration platforms, I don't think OP's was aiming at the technological breakdown of why this is so hard to achieve, so here's my view: basically, with suitable assumptions, you can accelerate forever. Take perfectly empty space, a perfect engine, turn off CMB and you're good for never-ending acceleration. But ... I think that problem that people look at relativistic problems bottom-up. Second Newton law holds at any speed. If you make two additional assumptions, that is that speed is low enough and that you are dealing with constant masses, only then you get known relation between force and acceleration F = ma. But in situation I think you are having on your mind, this is not so - flying such spaceship, you can have constant force pushing the ship with constant uptake of momentum that translates in always accelerating motion that's diminishing in the way that speed of the ship is approaching the speed of light, but in no finite time gets there. So, you can push the throttle as hard as you can withstand being pressed against your driving seat. But since link between force and acceleration breaks on high speeds, you can get your never-ending acceleration, but in ever smaller amounts.

An external force is required to accelerate an object anywhere in the universe.however ,a body which is given an initial acceleration continues to travel with uniform velocity after withdrawal of force in the space unless it happens to come across a heavenly body or enter a gravitational field.for example earth attracts or Accelerates an object with its gravitational FORCE.

Not the answer you're looking for? Browse other questions tagged special-relativity acceleration faster-than-light rocket-science space-travel or ask your own question.

6
Does the pilot of a rocket ship experience an asymptotic approach to the speed of light?

5
NASA Theoretical Faster Than Light Space Travel (IXS-Enterprise)
2
Why is locality an important requirement in physics?
1
Ether (LET) vs electromagnetic field in the double slit experiment
1
Why can gravitational acceleration not be detected by experiments
1
Infinite acceleration without loss of energy in a vacuum, gravity-less void?