Effect of magnetic field on time period of a spring pendulum

Let us consider that we have a spring pendulum, and a magnet nearby. Assuming that the spring is being attracted toward the magnet, does the period decrease?

The formula of time period is = 2𝜋√m/k Will the magnetic have the same effect as increasing g? 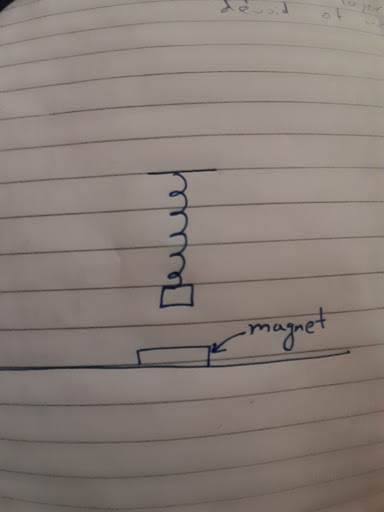 Technical version: Let $z$ be the vertical coordinate of the mass, with positive $z$ measured downwards from the unstretched location of the spring. The mass will experience three forces:

(This all assumes that $F_m'(z_0) < k$. If this was not the case, then the equilibrium position would be unstable.)

Not the answer you're looking for? Browse other questions tagged homework-and-exercises experimental-physics harmonic-oscillator or ask your own question.