What accelerator energies and types would be needed to explore electroweak unification, and if accessible, what would be the likely observables?

Question originally referred to electrostrong, but I actually meant to ask about electroweak. Edited to fix, but this is why there's an answer referencing ES not EW - that's my bad.

Broadly as the question asks.

The 7~8 TeV LHC was adequate to verify the Highs scalar field.Extrapolating, one might need equipment perhaps an order of magnitude more than some particle or phenomena, to confidently explore, detect, and verify the phenomena with ease. But perhaps not - far lower energies in other accelerators were able to make inroads on the Higgs and may have proved it over time, although they were slower to accumulate statistically compelling data.

A similar situation exists for electrostrongweak unification as existed with the Highs in the 1990s~2000s - we have a strong belief it happens at some energy, models strongly suggest how it happens and what observables might exist (unlike GUT which is much less clear), and an idea of the energy ranges it might involve.

(Natural experiments might also include ultra-high energy particles although it's unclear if these will either produce useful observables or indeed reach these energies often enough to be useful).

But how accessible/realistic are the energies needed to explore electrostrongweak unification? What is likely to be involved if we wanted to experimentally observe or verify the phenomenon, even if at less than ideal energies?

Also, since the very behaviour of quantum fields changes as a result of the phenomenon, this could be useful (very distinctive observables) or unhelpful (for the first time in human experience, fundamentals that hold atoms and subatomic particles together and control their behaviour no longer exist in the same forms). What are the implications of this, for such experiments, and what might we hope to observe?

(I'm assuming there could be a wide range of observables, as with the Higgs:

I'm interested in all 3 of these, in the answer, but the first 2 are important as they would at least allow for minimal verification and data capture.)

The calculations have been done for the Big Bang model:

One can see that electroweak unification occurs at the order of 100 GeV average energies of the particles in the universe at a time of $10^{-10}seconds$, whereas the unification of the electroweak with strong happens at $10^{14}$ GeV, at ~$10^{-32}seconds$.

Such energies are cannot possibly be generated in an accelerator. Cosmic ray studies, possibly but there is no control of input energies, a lot of ingenuity will be needed to test any specific models.

Edit after edit of question, which wants phenomenology for electroweak breaking in the lab.

As I said this has been studied for cosmological purposes where the average interaction energies go over the threshold, in electroweak over 100GeV.

There are experiments studying quark gluon plasma at LHC, but none of them discuss a phenomenology of quark masses restored to zero, as far as I can see, and in some models use masses for the quarks for example here.

This can be explained because of the phase diagram: 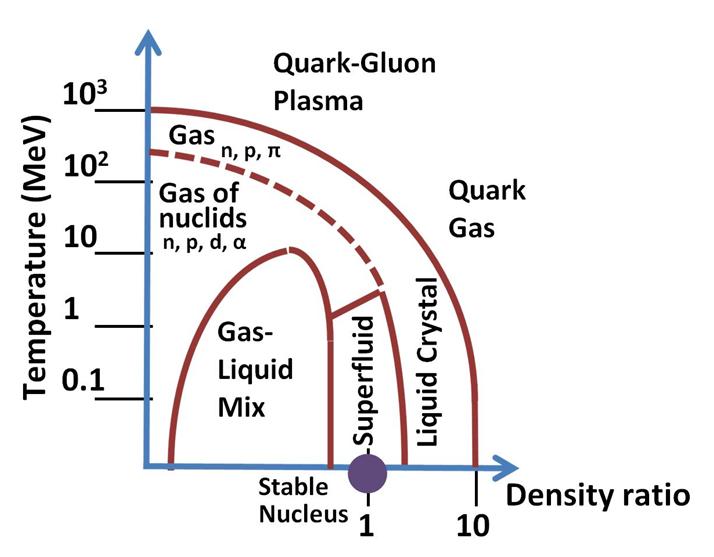 Where it can be seen that not necessarily the formation of a quark gluon plasma happens for energies over the electroweak symmetry break of 100 GeV.

From what I have gathered scanning this yellow report for future predictions for the projected FCC collider, the energy density will be twice that of the LHC ion collisions, $35$ to $40 GeV/fm^3$, at the time of $1fm/c$ (their figure 2 right) which is way below the scale in the Big Bang figure above, so future colliders will give access to plasma but not yet at the electroweak breaking scale. This explains why searches do not bring any references of phenomenology of electroweak breaking in plasma.

So it will have to be future ingenuity in collision, (way past my "date by" :) )that can bring an experimental check.

Not the answer you're looking for? Browse other questions tagged particle-physics experimental-physics electroweak particle-accelerators experimental-technology or ask your own question.

14
What did electroweak symmetry breaking actually look like?
4
Detecting the electroweak unification in data of quark gluon plasma

13
Use of Monte-Carlo simulation in High-energy Physics
29
How does the Super-Kamiokande experiment falsify SU(5)?
9
Is there a “difference” between photons that act as virtual particles and photons that act as the quanta of EM radiation?
25
Are there massless bosons at scales above electroweak scale?
23
How come “smaller, weaker” particles are more massive (have higher energies)?
0
Higgs mass and EW precision tests
20
Why not build a particle accelerator on ground level? What is the shallowest feasible depth to build one?
4
Detecting the electroweak unification in data of quark gluon plasma
4
What is the highest-energy event “naturally” happening in the current state of the Universe?