There was a fascinating paper in Nature recently, on the observation of two-neutrino double electron capture in xenon, with a half-life time of $1.8\times 10^{22}$ years.

According to Wikipedia, double electron capture can occur only when competing modes are strongly suppressed.

This is explained by Scott Manley in Why a Dark Matter Search Also Observed The Rarest Radioactive Decays at around the 7:20 mark.

That said, though, this is not enough to rule out an electron-capture mechanism on energetic grounds, since the energy hill from xenon-124 to iodine-124 can be climbed with the annihilation of the electron, $$(m(e^-) + m({}^{124}\mathrm{Xe}) -m({}^{124}\mathrm{I}))c^2 = +0.21\:\mathrm{MeV},$$ so there are definitely substantial details left to explain there, which can hopefully be explained by a nuclear physicist. Still, the difference in the energetics is definitely large enough that the two processes cannot be considered a priori to be roughly equivalent.

The reason that the mass-124 system has a different set of allowed decays than the mass-125 system has to do with the nucleon pairing force. Basically, nucleons (protons and neutrons) are happier in pairs than they are alone, and like-nucleon pairs are happier than proton-neutron pairs. If the proton and neutron numbers $(Z,N)$ for a nucleus are even-even, that nucleus tends to be more stable than an adjacent even-odd or odd-even nucleus. There are only nine naturally-occurring odd-odd nuclei, and only four of those are actually stable; all the others want to beta-decay to an even-even nucleus with the same mass number. 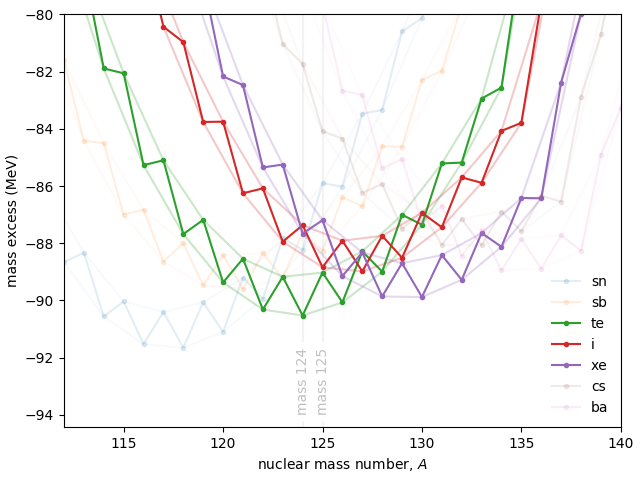 You can see that the binding energy (as represented by mass excess) for each element is roughly parabolic: the most stable xenon isotopes are around $A=129$, and the most stable tellurium isotopes are around $A=124$. But each element's mass-excess curve is jagged, as if there are two parabolae overlapping. That's the pairing effect. Xenon and tellurium are even-$Z$ nuclei, so the even-$A$ isotopes are more stable. But iodine is an odd-$Z$ nucleus, so the odd-$A$ (that is, $(Z,N)$ odd-even) isotopes are more stable than the odd-odd isotopes. And you can read off the plot, for example, that the only stable isotope of iodine is I-127: that's the only $A$ where the red curve has the most negative mass excess.

And if you can see that, then you can see why the xenon-125 may single-beta decay, while xenon-124 must double-beta decay. Xe-125 to I-125 is an even-odd to odd-even decay, which happens to be allowed, and doesn't have much difference in $Q$-value from the highly-suppressed double-beta decay of Xe-125 to Te-125. However, in the mass-124 system, xenon to iodine would be a decay from even-even to odd-odd, which is always suppressed due to the fact that nucleons prefer same-charge pairs to neutron-proton pairs. The fact that iodine-124 is more massive than xenon-124, which makes the decay $\rm ^{124}Xe \to{}^{124}I$ completely forbidden rather than just highly suppressed, is more or less a coincidence; but the fact than an even-even to odd-odd decay is suppressed compared to neighboring systems is clearly an effect of the nucleon-nucleon pairing interaction.

Here's another view into the same data set. But rather than grouping the isotopes by their proton number and showing all the mass data on the same scale, here the isotopes are grouped by their mass number. Weak decays will move a nucleus along the solid colored lines towards the minimum of each mass-excess curve. Decays to the left are electron capture and positron emission; decays to the right are $\beta^-$ emission. 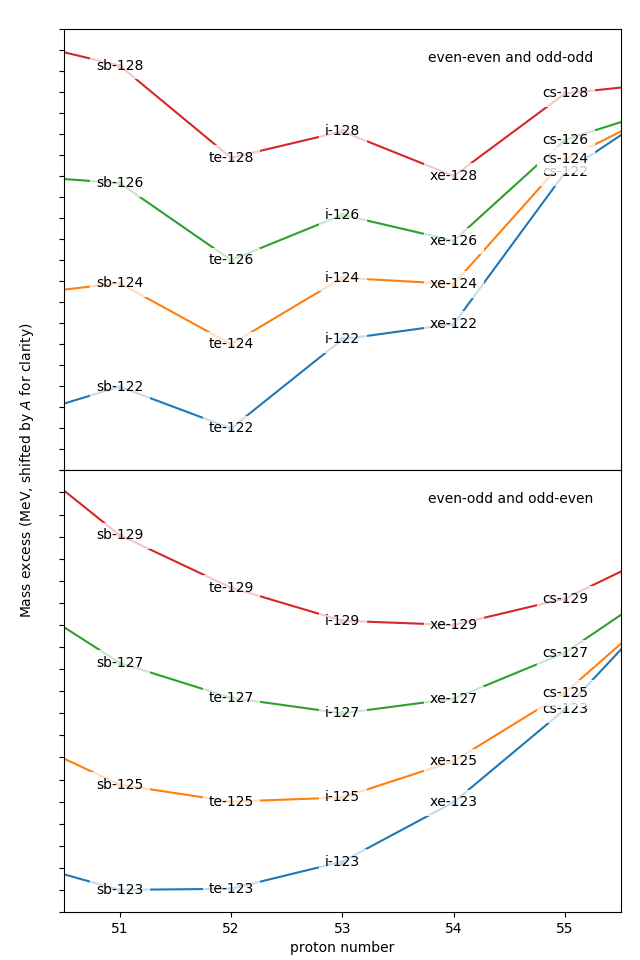 Emilio's answer is basically a text description of the orange curve in the top half of the plot, where the even-$A$ isobars live. Your question is why the orange curves in the two plots (mass 124 and mass 125) are different from each other. And the answer is, again, the nucleon pairing interaction. Turning an even-even nucleus into an odd-odd nucleus is expensive in a way that turning an even-odd to an odd-even nucleus is not.

Note from this second plot that $\rm^{126}Xe \to{}^{126}Te$ is also a candidate for double-electron capture, though the lifetime will be longer than the observed $2\epsilon$ decay in the mass-124 system because the $Q$-value isn't as large. In the mass-128 system, the possible double-weak decay is the other way, from tellurium to xenon.

This is a qualitative answer; maybe a nuclear physicist will undertake an answer. The paper under discussion is in arxiv.

One will need a specific nuclear model to answer this question, and a specific electronic model for Xenon. In this general discussion

This is a schematic that grossly distorts the picture relative to a scale model of the atom. The electron orbit radii are tens of thousands of times the diameter of the nucleus. ....

As the quote states the distances in the image are deceptive. As far as the K shell (principal quantum number-energy level) of the closest electron is concerned, the nucleus is a point. For electron capture to happen there should be a probability for the electron to exist in the angular momentum zero state, the S state which overlaps with the nucleus.

Thus your question reduces to : why two electrons from the K shell have a higher probability to overlap with the Xenon nucleus than one electron ? since you state that the one electron capture is unmeasurable. That is what I mean for a specific mathematical model. People are working on this as you can see here.

The existing decay mode for Xe125 and not for Xe124 again would need a specific shell model calculation to be fitted, though with an extra neutron one expects less stability of the nucleus.

To get a feeling see here the electron orbitals of hydrogen where the central point would be the nucleus overlapped with the electron, fortunately the proton has a smaller mass than the neutron, so even if a small geometrical probability of overlap exists, the probability is zero for the decay due to energy conservation.

Just found this which may give the simplest answer:

xenon-124, an isotope of the element Xenon, is fundamentally unstable. Its half-life is a whopping 1.8 × 10^22 years: more than one trillion times the present age of the Universe

if they tried to measure the lifetime of single electron capture in the dark matter (composed of Xenon) detector and they did not find it, then a complicated model should exist. It is the large mass of the detector that allowed for the measurement to such accuracy.

Not the answer you're looking for? Browse other questions tagged nuclear-physics radiation neutrinos or ask your own question.

27
Why is caesium-137 more stable than caesium-134?
6
What are the longest half-lives we can detect experimentally? What stops us going further? Are we trying to?

19
Why doesn't orbital electron fall into the nucleus of Rb85, but falls into the nucleus of Rb83?
2
Neutron decay and electron anti neutrino $n\to p + e + \bar{\nu}_e$
5
Free neutrons in the sun's core?
9
Does the population of higher level s-shells affect the decay rate of alpha emitters?
1
Electron Capture - Moseley's law - Calculating frequency
1
beta+/ec decay of Al-26: confused about energy balance
1
Why are all isotopes of tungsten considered (theoretically) unstable?