Is there centripetal acceleration with velocity of 5 m/s?

Me and a friend are having a conversation about this.

I had this exact same question when hearing learning about circular motion.

A teacher once asked: "In what case can an object always be accelerating, but its speed remain constant?", and the answer was circular motion.

I was not happy with this at the time as I saw acceleration as: "a quantity that is added to the speed of an object every second" which is how I think you view it as now (roughly speaking).

This interpretation of acceleration is incorrect.

I will aim to clarify the meaning of acceleration, not just by stating $a = \frac{d\vec{v}}{dt}$, but via the beauty of vectors.

(Semantically, part of our confusion stems from the fact that, up until now, you will have viewed speed and velocity as much the same thing. They are not. Hopefully I can now convince you why.)

We may now restate your question: "In circular motion, is there an acceleration vector?".

We observe that if there were not an acceleration vector, then the velocity vector would not change during the time interval, $\delta t$.

And we know that this is not the case!

If the velocity vector did not change, then the position vector would always increase in the same fashion and the motion would be that of a straight line.

And as we clarified before, if an acceleration vector is being added, the object is accelerating.

Here is a couple of pages from a maths book that introduces the topic in terms of vectors. It will just give you a bit of a better understanding of the topic of circular motion in general if you are interested to read a bit more into the equations. 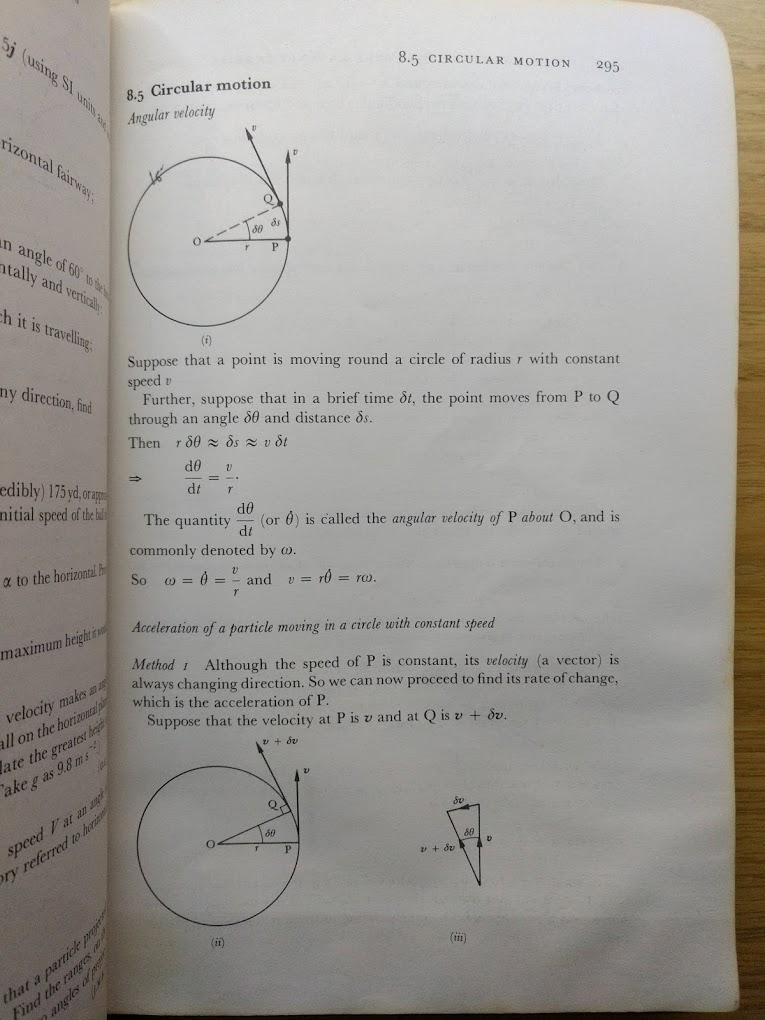 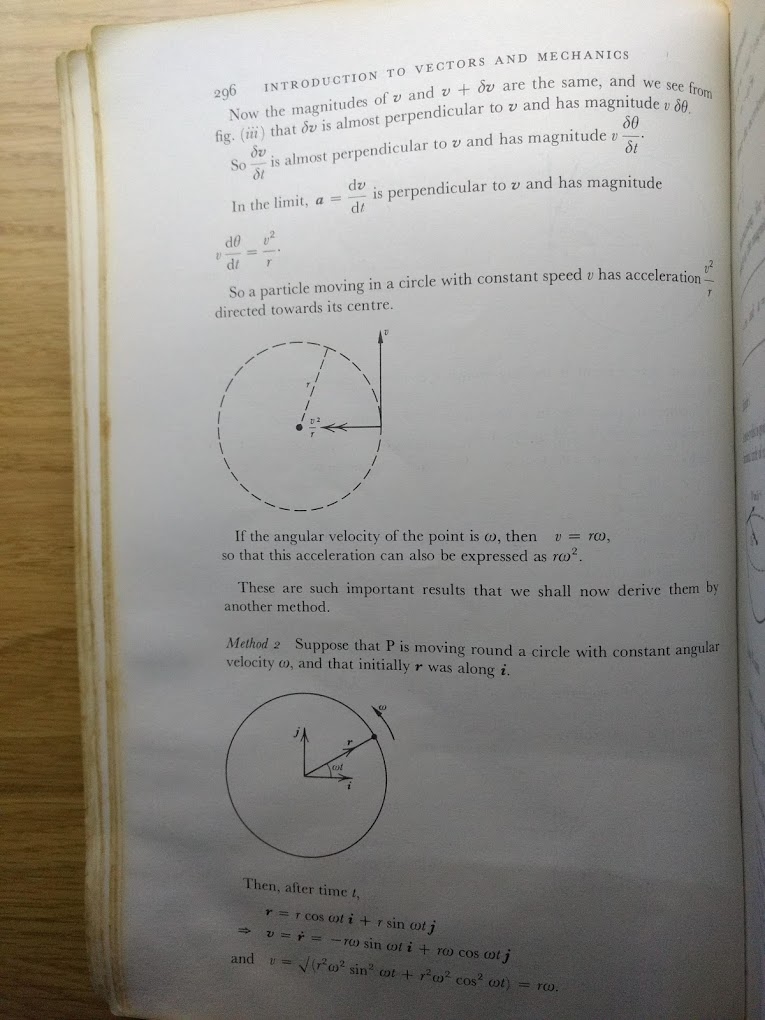 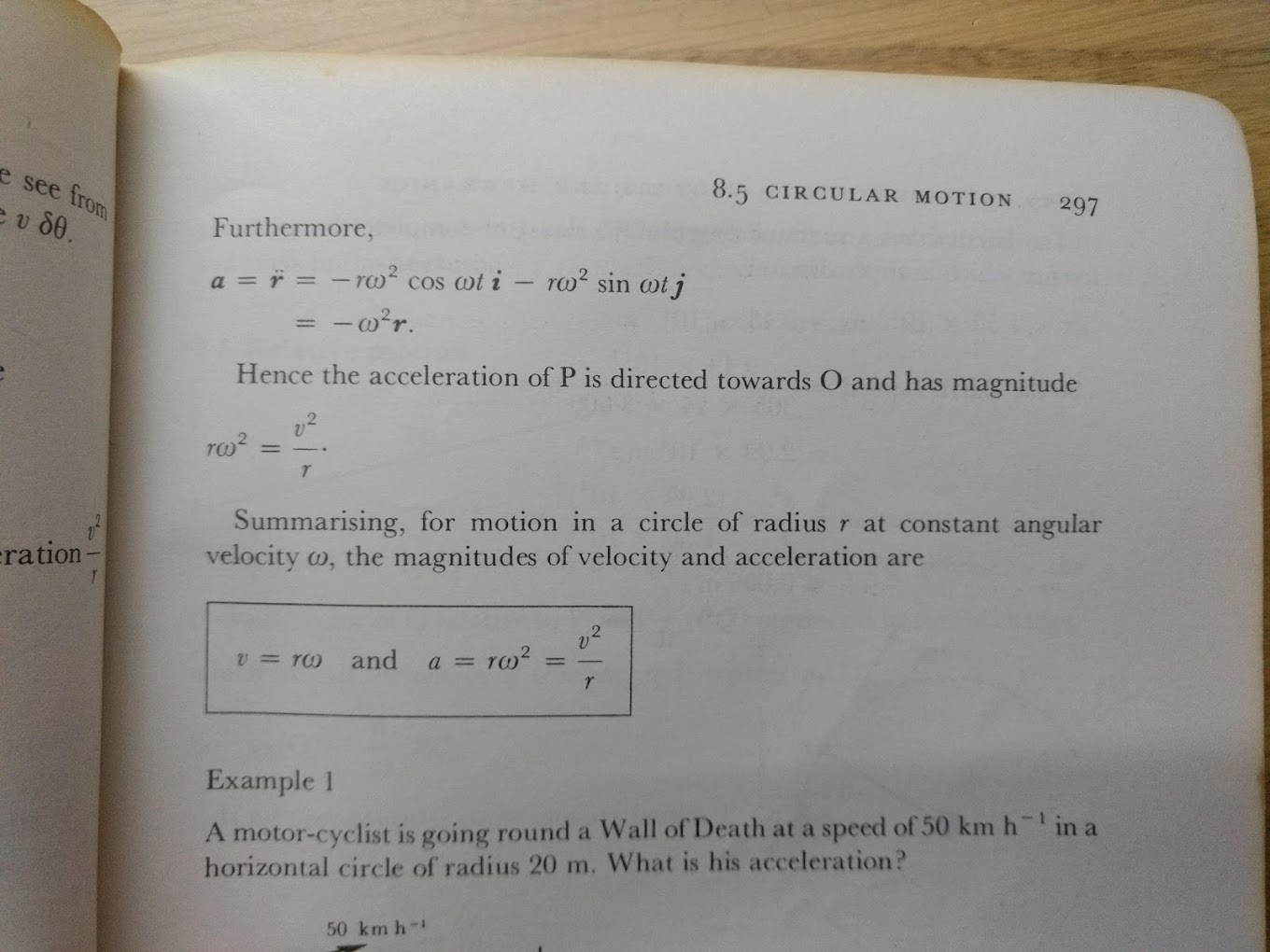 I am quite sure that by "velocity" here, you mean "speed": a number telling you how fast something is moving. The terms are used interchangeably in common usage, but in technical usage velocity also includes information about in what direction the particle is moving, and for a particle moving in a circle, this will always be changing.

You are right though in thinking that if the particle is moving in a circle, or any other path than a straight line, then there must be force, and thus acceleration (leaving off some technical caveats about reference frames and what not). Just as technical velocity has direction, so does acceleration and, for circular motion, this acceleration must be directed toward the center of that circle, hence "centripetal" ("drawing toward the center").

However, given only the speed at which the particle is moving around the circle, you cannot determine this, even if you intend for the particle to be moving with steady speed, because you also need the radius of the circle. This is why that the "turning radius" is such a big deal when it comes to driving: it is, effectively, a measure of the sharpness of a turn by comparing it to a suitably-tight circle, hence the name. The tighter the circle, or the tighter the turn, the more force and the more acceleration you need for any given speed, and that is harder for the wheels of your car to produce, meaning you're more likely to be unable to engage the road sufficiently well so as to successfully negotiate the turn at high speed and you'll fly off and crash, perhaps lethally. Mind the speed limit!

If your velocity is constant, you are moving in a straight line, not a circle. To move in a circle, the direction of the velocity must change, even if the speed is constant.

If your velocity is not constant, there is an acceleration. 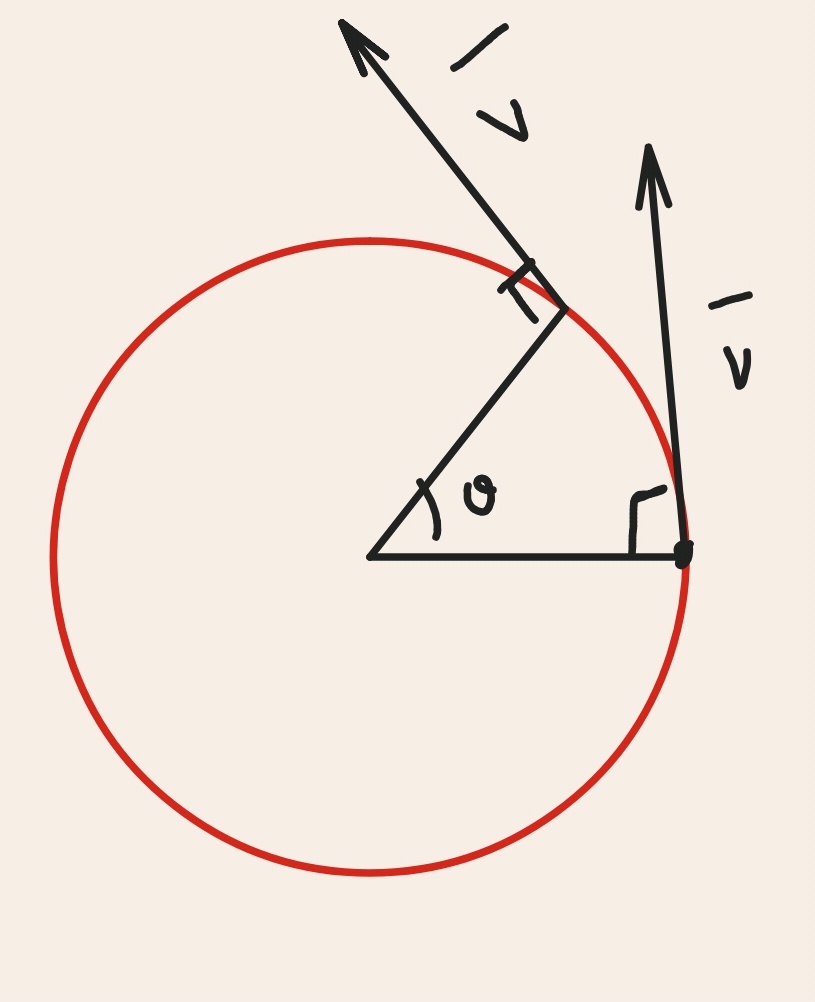 as we can see in the image the direction of velocity vector changes with time and it is well know to use that acceleration is defined as the rate of change of velocity ($\frac {d\bar v}{dt}$) which is a vector quantity (hence direction change does matter) so yes the motion of a particle in a circle with constant speed is accelerated. Link to centripetal acceleration :- https://www.google.com/url?sa=t&source=web&rct=j&url=https://en.m.wikipedia.org/wiki/Centripetal_force&ved=2ahUKEwiWlIWH-f_hAhVKRo8KHUClCbYQmhMwDHoECAkQLg&usg=AOvVaw2D3QwD2LbGv7HaTClHy5JR&cshid=1556906607021

I would like to add a supplementary argument. One could easily say - there's no question: acceleration is defined that way, from variation of vector velocity. And as everybody knows, definitions can't be discussed.

Well, we don't discuss a definition but we my ask for its motivation. Why was acceleration so defined?

The answer is in dynamics. It's in Newton's discovery that to keep a planet going in its curved orbit a force is required. His second law reads $$\vec F = m\,\vec a$$ where you can read that it's Sun's attraction, which for a circular orbit is orthogonal to velocity (vector), that keeps the planet from escaping.

Force causes acceleration. Orthogonal acceleration is what is needed to get a circular motion even with constant speed. This is why acceleration defined that way is useful in physics.

Not the answer you're looking for? Browse other questions tagged kinematics acceleration vectors velocity speed or ask your own question.