What are the forces acting on this car?

i found a cool website that explains sort of like the forces acting on the car and they seem to explain the process behind it. the website gives a free body diagram but the problem is that it doesn't have labels and its giving me a hard time trying to make an equation for it. 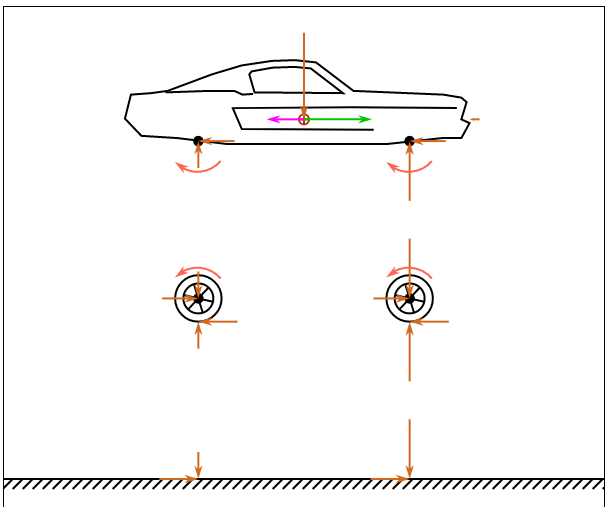 so far from what understand is that the green arrow is velocity, the arrow in the front of the car is Air resistance, purple arrow is acceleration and the arrow on the circle in the middle of the car is the force of gravity acting on the car.

here is the website: http://dynref.engr.illinois.edu/ava.html (its under 2D multi-body model) if anyone would help me understand the other arrows so i can make an equation of it to explain the effects of the brakes when the car is de-accelerating, or if you can make one that would be great too, but i just want to know how the car moves

The arrow pointing north on each wheel is the normal force on the wheels caused by the ground, and due to Newton's Third Law of Motion, the south arrows on the ground are the equal but opposite forces.

The west arrow on each wheel is the force of static friction caused by the ground and tire contact. The east arrow on the ground is the same force, opposite direction.

Lastly, the east arrow on each wheel represents the frictional force caused by the car brakes. Therefore the west arrow on the hub is the equal but opposite force.

Note that the brakes apply a translational force, and since the force of friction acts in an opposing direction at the point of contact between the tire and ground, the force of friction is what causes the rotational motion of the wheels. When the car is accelerating, the forces due to the brakes are replaced with the engine's applied force, i.e. thrust, which is also translational.

4
Why does friction cause a car to turn?
11
The direction of frictional force in smooth rolling motion
3
What causes a car's velocity to follow the front wheels' direction?
1
Free body diagram for two masses on inclined plane with frictions
1
Confusion about signs in this kinematics question?
0
Braking car and the force of friction - front-wheel-drive
0
Acting forces on a curve ball (billiards)
0
Friction acting between road and tyres of a car