Can muons decay into quarks?

The reason given on wikipedia is that one of the product neutrinos of muon decay must be a muon-type neutrino and the other an electron-type antineutrino due to conservation of leptonic family numbers.

Does this mean that muons can't decay into quarks plus a muon-type neutrino, which can be lighter particles than the muons itself and with electric charge added up to -1? If they can't, why?

No, muons can't decay into quarks because quarks are confined; the final product cannot be quarks, but rather composite particles made of quarks, such as mesons and baryons. The lightest mesons are the pions, which are already heavier than the muon, so any such decay is forbidden by energy conservation.

On the other hand, the extremely heavy tau can and does decay to light mesons quite often, as you can see in the PDG entry.

Maybe my answer is non-mainstream physics (though I'm sure it's gonna be mainstream one day) and I give the answer nonetheless. It cán be enlightening, who knows?

As might be known, I'm a big fan of the Rishon Model, concocted up by the Israelian physicist Haïm Harari.

He sees quarks and leptons as composite particles made up out of just two (!) truly elementary particles, the T-rishon, and the V-rishon.

which reads in the standard formulation as:

However, as knzhou wrote, the energy of a muon is too small to produce a pion and a muon-neutrino.

But if we take the third generation tau particle (which, according to the model, is also built up out of three anti-T-rishons, $\bar T \bar T \bar T$) this tau will be heavy enough to produce a pion and an anti-tau neutrino by the mechanism described above.

Look at this picture, the standard Feynman diagram of tau decay: 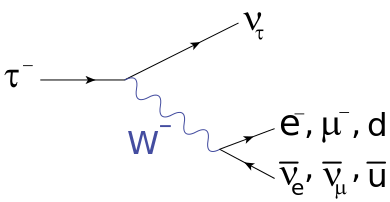 Not the answer you're looking for? Browse other questions tagged particle-physics conservation-laws standard-model quarks leptons or ask your own question.

2
Difference in decay for muon and anti muon
1
How does a structureless particle decay?
7
Quark mixing vs neutrino mixing, mass eigenstates, weak states and detection
1
Can physical processes be deemed possible or impossible with Standard Model vertices alone?
0
Muon neutrino interacting with nucleon's quarks
0
Conservation of lepton
0
How can pure leptonic interactions be mediated by the weak force?
0
$\beta$ decay paths question
0
Conservation of lepton number in neutrino oscillation