Is there a scalar acceleration?

Is there a scalar counterpart to Acceleration?

P.S. First question on physics.stackexchange. Please excuse me if the question is inappropriate.

Edit to Question: I think I need to explain the question better. If I walk to the store and back home, my displacement is zero and my velocity would also be zero (regardless of how long it took me). Since the store was some distance away, my total distance traveled for this situation would be positive and so my speed would be positive. I would then conclude that speed is not the magnitude of velocity, but something different (just like distance is a different concept than displacement). In this way I can say distance & speed are scalar (not magnitudes of vectors). Now that I define my question a bit better, I think I see the problem. It seems distance is a summary (i.e. sum of) of the magnitudes of a group of vectors (displacements). Speed is the summary of the magnitudes of the first derivative (with respect to time) of the group of vectors. I doubt there is (or is there a need for) a similar summary of the magnitudes of the second derivative of the group of displacements. I welcome your thoughts.

The way I read this question it's asking for an unambiguous word to use to describe only the scalar part of acceleration. To the best of my knowledge this word doesn't exist in the English language.

The thing is, Acceleration is a vector but the scalar part is also acceleration. The word is overloaded. Why? Well vector came along later.

As you can see, in the English language at least, acceleration as a scalar without direction has a few years on the word vector. The problem is that we never introduced a word as the pair of acceleration to give an unambiguous way to distinguish between the two ideas. So when we started using vectors we just overloaded the word acceleration. You can use it to mean either one. Which means readers have to figure out the meaning from context.

If I walk to the store and back home, my displacement is zero

Well it is now.

and my velocity would also be zero (regardless of how long it took me). So long as right now you're holding still and not heading for the backdoor on your way to the pool.

Since the store was some distance away, my total distance traveled for this situation would be positive

and so my speed would be positive.

Er huh? You mean your average speed? Your speed now? These are not the same thing.

I think this might be the root of the problem. This is not the same kind of pairing. 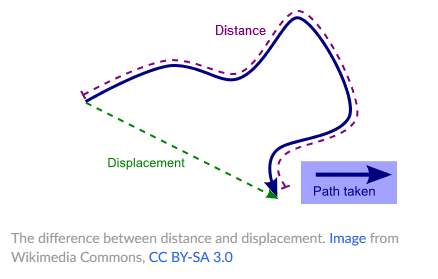 If I was going to organize these concepts they'd look like this:

The difference between Speed and Average Speed:

It's possible to move 1 mile in an hour and at the moment that hour ends be going 60 miles per hour. This difference has nothing to do with dimensions. It has to do with driving like my Grandma.

For more about this look up the fundamental theorem of calculus

g-force. Example: pilots worry about g-force, but not the direction.

Furthermore: in space-craft engineering $g$ is a commonly used unit. For instance, the Mars Exploration Rovers (the ones that were dropped on the surface in airbags) were designed to tolerate 40 g on the 1st bounce, and this (plus margin) was the mark to which internal components were tested. Likewise, sustained hypersonic entry and transient parachute-deploy decelerations were discussed in g.

Launch and thruster induced vibrations were quantified via acceleration spectral density in "g-squared per Hertz". I believe this also standard in earthquake-related structural engineering.

Not a facetious answer, and not entirely general, but how about Gs (as in multiples of the Earth's surface gravitational acceleration)?

Not the answer you're looking for? Browse other questions tagged kinematics acceleration terminology vectors or ask your own question.

17
Velocity is to speed as acceleration is to ________?
1
How does distance an speed (rather than displacement and velocity) generalize to higher order derivatives?

2
Is there an agreed upon physics definition of the term 'speed'?--for example, can it be negative?
0
Effect on speed when decreasing the magnitude of acceleration
0
Speed and tangential acceleration in pendulum motion
3
Terminology for time derivative of speed (not velocity)
0
Using centripetal acceleration to find back the velocity magnitude at $t+dt$