There are several threads on this forum regarding the LHS at CERN however I am interested in a non-calc solution. I recently stumbled upon a multiple choice question about it while studying for a physics exam and am wondering if someone has an elegant way of solving it without a calculator. We are given a sheet with information such as proton mass ect.

The question states: According to a page on Wikipedia which describes the LHC particle accelerator (Large Hadron Collider), protons are accelerated to an energy of 7 TeV ≈ 1.12 μJ. It also states that the protons aquire a speed of about 0.999999991c. On CERN's own website, on the other hand, it has been stated that the protons get a speed of 0.9999c. What speed does a proton have with an energy of 7 TeV?

Here's how I would solve it using a calculator: 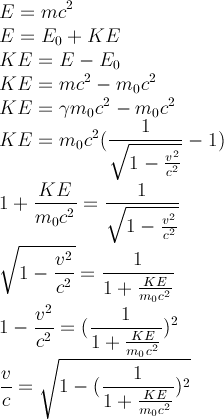 I cannot wrap my head around solving this with only a pen and paper especially considering the similarity of the answers. Could it be that they regard this as "presumed knowledge"?

Not the answer you're looking for? Browse other questions tagged mass-energy or ask your own question.