What does warming up a gong do?

This is almost something I'd cross post with the Music SE, but I specifically am looking for physics answers not music answers.

When playing a gong, one is often told to "warm up" the gong. This involves very lightly tapping the gong with the mallet a few times before striking it. The taps should be relatively inaudible.

Musicians say that doing so makes the sound "brighter," which is a very psychoacoustic term. I'm curious what might physically happen which could then be translated as "brighter" by musicians.

What changes in a gong when you lightly tap it a few times which would change the sound produced? I'd appreciate an answer which could explain any effects in terms of the soundwaves produced by the gong, but I would accept an answer which merely describes a interaction of material properties which could have an effect on the sound waves.

acoustics
share|cite|improve this question
asked May 2 '19 at 16:23

Musical instruments generally produce sound waves at a collection of frequencies, even when playing a single note. For instruments which make distinct pitches, these frequencies are roughly multiples of a fundamental frequency, which determines the perceived pitch. The perceived brightness is determined by the strength of higher frequencies, in the kHz range. A percussive instrument like the gong obeys the same principles, except that generally there are a whole lot more frequencies present.

If the behavior of a percussive instrument is well-described by linear differential equations, you would expect all of the frequencies to act independently. Their strength would be determined by the initial strike, and then they would each exponentially decay, perhaps at different rates. This is a good description for, e.g. pianos, but not for the gong. According to Fletcher and Rossing's exhaustive work The Physics of Musical Instruments:

When we seek a physical origin for the extreme nonlinearity of the tam-tam [the Chinese gong], we find this first in the fact that its metal is thin and not under significant tension. This means that the stiffness and tension restoring forces are very small, so that the quadratic tension generated by mode displacements ·has a large effect. Another source of mode coupling and nonlinearity arises from the hammered bumps in the surface, since abrupt changes in slope are known to generate mode coupling and nonlinear frequency multiplication.

When the gong is struck, most of the energy goes into low frequencies, and nonlinear effects feed it into higher frequencies only gradually. For example, Fletcher and Rossing (1982) collect the following data for the buildup and decay of vibrations in different frequency bands: 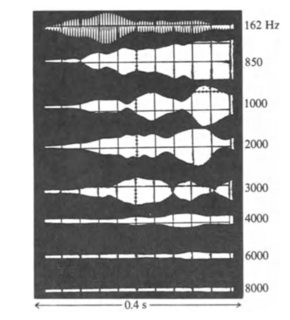 The initial large excitation of low-frequency modes is apparent, as is the subsequent transfer of vibrational energy to modes in the range 1- 5 kHz, which contribute the late-developing "sheen" to the sound.

Fletcher and Rossing don't mention "warming up" the gong at all, but presumably the point of this is to get some energy into the higher-frequency modes from the beginning, so that they can build up quicker, giving a brighter and more immediate sound. (Of course, this "warming up" has nothing to do with the temperature of the gong.)

That's presumably the canonical explanation, but I still find it a little puzzling why light taps can have such a large effect. In the simplest possible nonlinear equations, the amplitude $a_l$ for the low, excited modes feed into higher modes $a_h$, making them grow linearly in time. For example, one might have the leading behavior $$\dot{a}_h \sim a_l^n, \quad a_l \sim e^{-t/\tau}$$ if the high frequency is $n$ times the low frequency. So starting with a small amplitude for the high-frequency modes wouldn't make that much of a difference.

I'm going to make a wild guess about what else is going on here. From Fletcher and Rossing again:

The low-frequency domain has several prominent axisymmetric modes, which absorb much of the energy of the initial blow. [...] Other families of vibrational modes of considerable interest arethose that have a number of radial modes equal to the number (or an even multiple) of hammered bumps in one of the circles. These modes would be favored in the delayed sound...

If the high-frequency modes break a symmetry that the low-frequency modes don't, then the rate of change of $a_h$ has to be proportional to $a_h$ itself. This changes the growth from linear to exponential, so starting with a nonzero value of $a_h$ really can make a significant difference. (However, in the absence of any warmup, energy can still be transferred to the asymmetric modes by asymmetric bumps on the gong's surface; it just takes longer to get started.)

I have a suggestion for something it probably isn't. It probably isn't temperature driven changes in the Young's modulus of the material of the gong.

Young's modulus tells us the difficulty in bending a material. It's like the strength of a spring. So if you were able to raise the gong's temperature by 50 °F, you might lower its Young's modulus by a few percent. This would correspondingly change the frequency at which the gong vibrated. Assuming it's brass or bronze or steel. This is likely something that would be audible to even a fairly non-specialist's ears. Even I might be able to hear the difference.

But striking the gong, especially lightly, isn't going to raise the temperature very much. Plus raising the temperature this way should lower the frequency as opposed to making it "brighter."

Heh. In undergrad one of our proffs did a demo. He had a bell, which he had gotten made at a local factory that was locally famous for making brass products. But his bell was made of lead. The factory folks told him it would sound terrible. And yes, at room temperature it sort of went "clunk." Not very nice. But at liquid nitrogen temperatures (about -320 °F) it sounded very different.

12
Why is it that forces like gravity and electricity (approximately) basically act between pairs of bodies only?

3
What does it mean to increase volume by X decibels?
1
What does a constant signal sound like?
0
What does a goniometer (sound) show?
2
What does a sound of infinite Hz sound like?
3
What physical quantity does a microphone measure? Is a wav->D/A->loudspeaker->microphone->A/D->wav chain fully linear?
6
Why do I hear street noise more clear on the higher levels?
4
Frequency drift of a tuning fork