There was a problem in my astrophysics lecture which showed a cluster of stars (M92), the apparent magnitude was plot against the B-V colour for each star in the cluster: 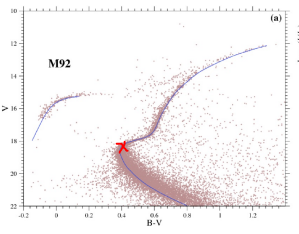 Along with other graphs, we were asked to estimate the age of the cluster. Our professor chose the turn off point marked on the graph and worked out the temperature of the stars there and then with another graph related it to the average mass of star at that point. Then using an equation we were given which gives a rough relation between the time a star spends on the main sequence and its mass, an average time in the main sequence of 5.3 Gy was found for such stars.

He then said that, since they are about to finish their main sequence lives, this time is a valid estimate for the life time of the star cluster.

My question is that how do we know that they are at the end of their lives? All I can tell is that a star at that marked point will have a main sequence life time of about 5.3 Gy, I see no obvious reason to believe the star is at the end of its main sequence. My only guess is the fact that its located at the sharp bend.

Can anyone explain my professors explanation for why the ms life time of a star at that point is a valid approximation for the clusters lifetime?

The main sequence is precisely the diagonal band in which most stars are located in typical HR diagrams. It is formed by stars that are currently burning hydrogen in their cores, and it turns out that most stars pass around 90% of their lifetime in this state. Main sequence stars approximately follow the mass-luminosity relation, which can be derived under simplistic assumptions (see for example section 3 from Choudhuri's Astrophysics for Physicists): $$ L \sim M^3 $$ So the turn off point indicates the maximum value of the mass of these stars. The reason you see the turn off point is because there are already some stars out of the main sequence stage in that cluster (those originally most massive). Remember: the more massive a star is the shorter its lifetime, so these are the first to leave the main sequence and depart into the giant realm. As a consequence, as time passes, the main sequence diagonal gets shortened (see figure below). Hopefully this solves your first question. 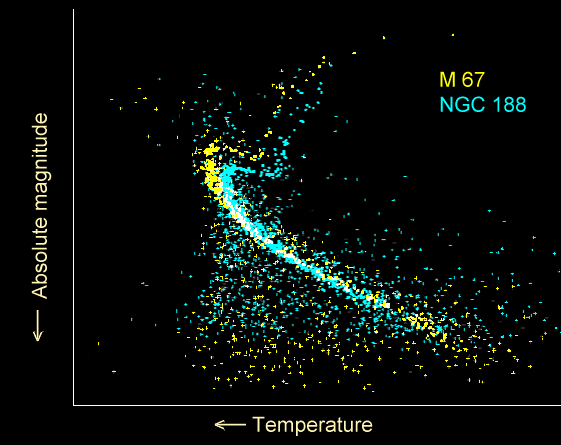 Answering your second question, the turn off point is used because at that point we know stars have exhausted all their hydrogen fuel. Knowing the time it takes for such a star to burn all of its hydrogen (by theoretical models) we can estimate the age of such star, and hence the age of the cluster. You could not do the same with a star in the middle of the main sequence band, for there is no way to know how much hydrogen it has fused.

This is (as far as I know) usually done by fitting stellar isochrones to the CMD, which are the blue curves in your figure.

Disclaimer: I'm not a researcher, but did my final undergradute thesis on open clusters, so if anybody spots something wrong please feel free to correct me.

Not the answer you're looking for? Browse other questions tagged astrophysics astronomy or ask your own question.

1
Could a viable solar system work with a cluster of dwarf stars in center? And would it last longer than a single stellar mass star?
18
What happens to the neighboring star of a type Ia supernova?
10
What is the frequency of occurrence of stellar classifications off the HR main-sequence?
0
Are combined masses in space, such as galaxies, considered to be uniform bodies? *In addition, a related question about force
5
Why are stellar clusters useful for developing stellar evolution models?
6
Why is the white-dwarf mass distribution highly peaked?
0
Conditions for the possibility of life on a planet