What is the term for hose fluctuating movements during flow?

What do we call it when water flowing through a flexible hose causes it to act like snake movements if the hose were disturbed? Can this movement be explained by the Coriolis force?

Here is my hypothesis. Consider a hose that is shaped like the diagram below, with two straight sections linked by a section of constant curvature:

The thick black arrows indicate the velocity of the flow. The flow in the second straight section has been deflected, so a force must have acted on it. The fluid dynamics of the situation might be complicated depending on how turbulent the flow is, but this force must ultimately come from the hose walls, since they're what constrains the fluid to flow in this particular direction.

By Newton's third law, there must have been an equal and opposite force on the hose walls during the curved section, as indicated by the thin red arrows. This force isn't to do with the Coriolis force, it's just the reaction force that must exist in order for the flow to be deflected. This force must cause the hose walls, and the liquid within them, to move. Note that there is a more or less constant force on the curved section of the hose, but no force at all on the straight sections - so the curved part is being pulled outwards to the left, but the straight parts aren't being pulled at all. After a little while, it must look something like this: 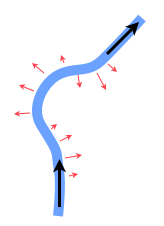 The original curved part has moved outwards (and is still moving), but this has created two new curved sections, which are now experiencing reaction forces in the opposite direction. These will then start to move as well, pulling yet more of the straight parts into curved configurations. The hose will begin to chaotically wriggle about with dynamics quite similar to the meandering of a river, although the details of their cause are quite different.

Whether this happens or not must depend on the speed of the flow (because a faster flow requires a larger reaction force to deflect it) and on the extend to which the hose resists these induced changes in its curvature. The latter is probably quite complicated, depending on the stiffness and elasticity of the hose walls, how much friction there is, and probably also on the viscosity and density of the fluid inside, and on whether the flow is turbulent. If the flow is fast, the hose is very flexible, and there is not much friction then I would expect it to wiggle a lot.

To answer the question in the title, I don't think there is an accepted term for this phenomenon, oddly enough. For example, this scholarly paper refers to it as "The fluidelastic instability behaviour of flexible tubes subjected to internal single-phase ... flows" - but I think you could probably get away with calling it "the flexible tube instability".

I've seen the video images of a firehose that is out of control. It struck me that it's a runaway effect; once it starts it gets out of hand in a split second.

My guess is that elasticity of the wall of the hose plays a part. Once the hose is wriggling you get turbulence in the flow, and I guess that turbulence reduces the water pressure along some sections of the wall, allowing elastic force to change the bending of the hose. The more the hose wriggles the more turbulence is induced.

I think self-reinforcing turbulence and elastic force of the hose wall are the main factors.

When the nozzle sweeps from side to side there will also be some coriolis effect along the length of the nozzle. If anything I would expect that coriolis effect to dampen the wriggling, but as we know any dampening effects are clearly swamped.

I am going to go with buckling playing a major role. A hose is a long slender column, and the jet of water is producing a compression force on it. So for a sufficiently strong jet, the straight hose shape will become unstable and there will be lateral bending.

But when the bending moves the end of the hose to one side, the angle of the jet also turns to that side, which means there is a restoring force and moment, that will send the hose bending to the other side, only much more strongly, since now there actually is lateral force due to the jet.

Lather, rinse, repeat, and you eventually have your out of control hose.

Simply defined, cavitation is the formation of bubbles or cavities in liquid, developed in areas of relatively low pressure around an impeller. The imploding or collapsing of these bubbles trigger intense shockwaves inside the pump, causing significant damage to the impeller and/or the pump housing.

Not the answer you're looking for? Browse other questions tagged fluid-dynamics soft-question terminology or ask your own question.

7
What causes the chaotic trajectory of a balloon going flat?
0
Garden hose instability