I am trying to generate a phase diagram of pressure versus temperature in a NPT ensemble using molecular dynamics method. I am using the Lennard Jones potential with 108 particles and Berendsen thermostat and barostat to fix the parameter.

In order to observe phase transition I plot the radial distribution function (RDF) and also density versus temperature graph for various fixed temperature. However it is hard to differentiate liquid and gaseous phase from RDF.

Periodic boundary
cut off radius = 2.5
Truncated and shifted lennard jones potential
number of particle = 108
number of steps = 2000 timestep = 0.004
Berendsen barostat of scale coeefficient of 0.1 is used to scale the size of simulation box

The density versus temperature graph for pressure of 1.0MPa:
http://i.stack.imgur.com/x0d0p.jpg

The solid liquid transition can be seen but not the liquid vapor transition.

Anyway, let's see where are you. From your plot I've deduced several poins of yours:

and marked them on the density-temperature phase diagram of a Lennard-Jonesium: 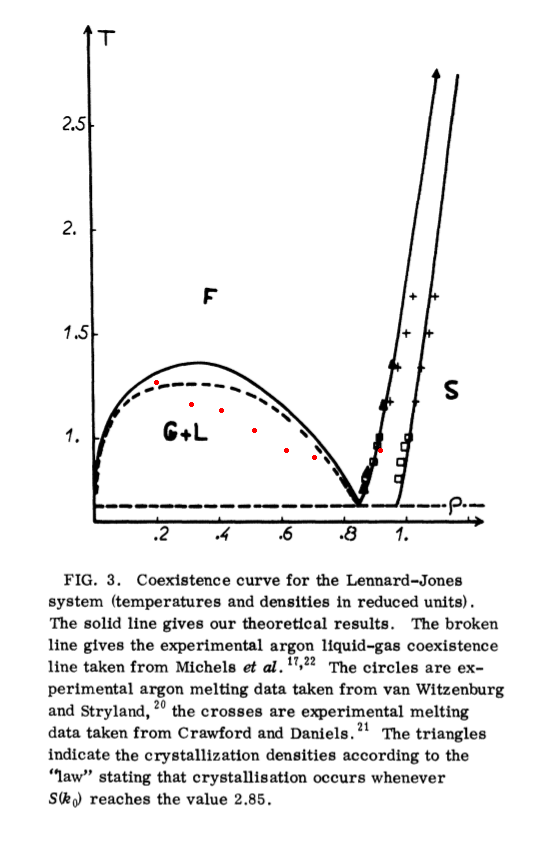 I took the figure from the article I've already mentioned in your aother question, the article is by JP Hansen, L Verlet "Phase Transitions of the Lennard-Jones System." As you see, generally you start from a liquid+solid, then as you lower the density (or increase the temperature) solid melts into liquid, then somehow you reach the region of vapor-liquid coexistence where liquid gradually evaporates until you end up with mostly vapor phase.

Most of your process lies in a region of vapor-liquid coexistence, some part in the region of solid and liquid coexistence. The switch between the two occurs near $\rho =0.8$ and indeed your plot shows a peculiarity at these point. You should better resolve this region you may be near the triple point as Fabian suggests.

To sum up, $\rho(T)$ should be continuous, it is $\frac{d \rho}{d T}$ that should not. You plot seems to exhibit such a behavior, but I cannot tell for sure. You have to accurately measure the transition between the liquid and liquid+vapor to find the discontinuity of $\frac{d \rho}{d T}$. The problem is it can be hard to hit into liquid, since liquid for LJ (and argon) occupies only a small gap of $T$ and $\rho$. Why have you put $p$ to be 10 atm, maybe you wanted to have 1 atm?

You cannot rely on an RDF in the region of vapor-liquid coexistence, it has hardly any sense there --- basically you have bubbles of liquid floating in a vapor. Though due too the small size of your system it's hard to talk about bubbles.

You might want to study the system clearly exhibiting vapor-liquid interface, that is when the one part of your cell has vapor, the other one has liquid. Thus you could actually see how the amount of liquid diminishes due to evaporating. Given $z$ is a vertical axis, perpendicular to the surface of the liquid you can study $\rho(z)$ instead of RDF.

Last, but not least, obviously, I could not plot your points accurately on the phase diagram, be cautious not to rely on these too much, that's just an estimation. And the phase diagram itself is intended to reflect the true LJ, not the shifted and truncated one.

For those who may read this later: you cannot find the liquid and vapor phases independently in this way. The reason is that for densities in between the liquid and vapor densities, the system will phase segregate into droplets within the simulation, and so your total density will include contributions from both phases. Consequently you can change the pressure or density continuously just by changing the occupancy of each phase. If you really want to see the separate phases with low particle numbers, Gibbs Ensemble Monte Carlo is probably the best bet. This method sets up two subsystems and allows them to exchange volume and particles with each other. Total free energy will be minimized when each subsystem is in a single phase, one liquid and the other vapor. It is easy to read off the densities from there.

Not the answer you're looking for? Browse other questions tagged thermodynamics computational-physics phase-transition or ask your own question.