An aircraft climbs to 15000 feet and enters 'level flight' phase. My basic knowledge of physics says that forces on the aircraft at this time are balanced - as seen in this diagram. 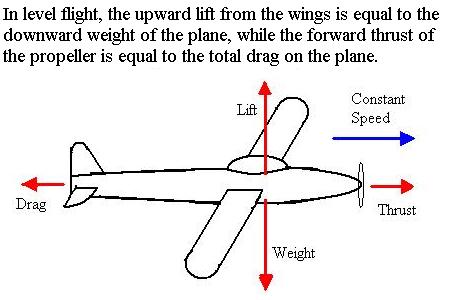 Would an aircraft in such state maintain constant distance to the earth i.e fly concentric to earth surface with constant altitude or will it continue straight 'ahead' with slowly increasing altitude?

In other words, Assuming calm air, flight on ocean (so no flight path change need due to terrain), and no change in aircraft's weight is the pilot required to trim the aircraft continually to maintain the level flight at this constant altitude (15000 feet)?

Would the aircraft fly in trajectory A or B here? 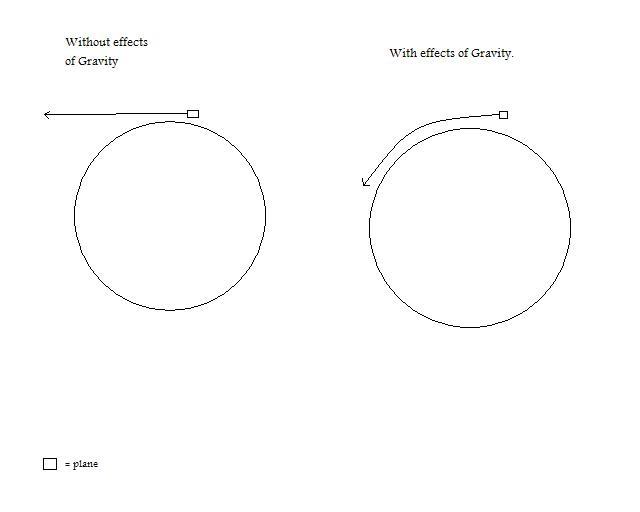 When trying to find an answer to this problem, many people have mentioned that the aircraft will follow a path concentric to the surface of the earth due to 'gravity'. But I cant get my head round this because in level flight all forces including weight/gravity are being counteracted by another force - lift in this case. Can someone please explain the forces at work here in a bit more detail. Thanks.

The pilot is required to trim to maintain constant altitude but not because of "flying straight ahead."

This is actually desirable. Air is less dense as the aircraft climbs to higher altitudes, meaning the drag decreases and it can fly with less fuel for the same speed. This is called cruise climbing. However, this is problematic for air-traffic controllers. For sanity and safety reasons, aircraft should maintain a constant altitude. So, to compromise, they step climb where the aircraft holds constant altitude for a bit, then is allowed to climb up to a new altitude and hold there, etc.. The aircraft will be slightly less efficient at each phase, but it should average out to be close to the ideal smooth curve.

Neglecting the change in weight, if all forces are in balance then the altitude remains constant without any change required by the pilot. Since gravity always points towards the center of the Earth and since lift is exactly normal to this, if weight doesn't change and lift doesn't change, there is no vertical displacement. So the aircraft would maintain a constant altitude without any additional inputs.

If I can just add to Cleonis' answer,

Would an aircraft in such state maintain constant distance to the earth i.e fly concentric to earth surface with constant altitude or will it continue straight 'ahead' with slowly increasing altitude?

In any flight random motions of the air will pitch (and roll and yaw) the airplane to a smaller or bigger extent. You can be flying in an updraft or downdraft. Flying the airplane is that you correct for those random jostlings. So the pilot (or autopilot) is always in the process of keeping the airplane level and at the designated altitude.

A side-effect of that is that the airplane keeps flying along a concentric circle around the Earth's center. Following the Earth's curvature requires no separate input because the corrections for the random jostlings are far bigger anyway.

But yeah, as a thought experiment: in a perfectly motionless atmospere that would allow you to fly dead ahead you will over time gain altitude as the earth curves away from under the airplane.

The text in the above picture is confusing. To the left it says: 'no gravity'
What is intended, I guess:
On the left side: 'Resultant force of gravity and lift is zero'

Let me make a comparison with an orbiting satellite. In orbit there is only one factor: gravity. For a satellite the curve of the trajectory is due to gravity only. The satellite is falling down, but it has so much velocity component parallel to the Earth's surface that it never reaches the Earth.

Imran Ullah has pointed out a subtlety, and I think I should address that.
The initial condition is that the direction of gravity force and the direction of lift force are exactly opposite.

Recapitulating: if the autopilot keeps the orientation of the aircraft the same then the aircraft proceeds on a straight line that is tangent to the surface of the Earth. As the aircraft moves along that line over time the direction of gravity force will no longer be exactly opposite the lift force. As indicated by Imran Ullah, the new resultant force will not be zero: it will point rearward, and slightly upward.

So, if the autopilot is programmed to maintain constant air speed, but to leave the altitude to whatever happens, the prediction is that the flight path will curve up.

Not the answer you're looking for? Browse other questions tagged gravity classical-mechanics rotational-dynamics rotation aircraft or ask your own question.

1
Is airspeed constant or cyclical when flying model aircraft in windy conditions?
2
What does it mean that the weight is negative?
1
Is this vector diagram of the forces at play in turning flight correct?
0
Does general relativity predict different forces on aircraft than Newtonian mechanics?
1
Aircraft turn displacement from non-linear turn rate (instantaneous roll rate)