I think this is a simple enough question but I am not able to see the consistency in two different math of the same problem. Here is the problem, 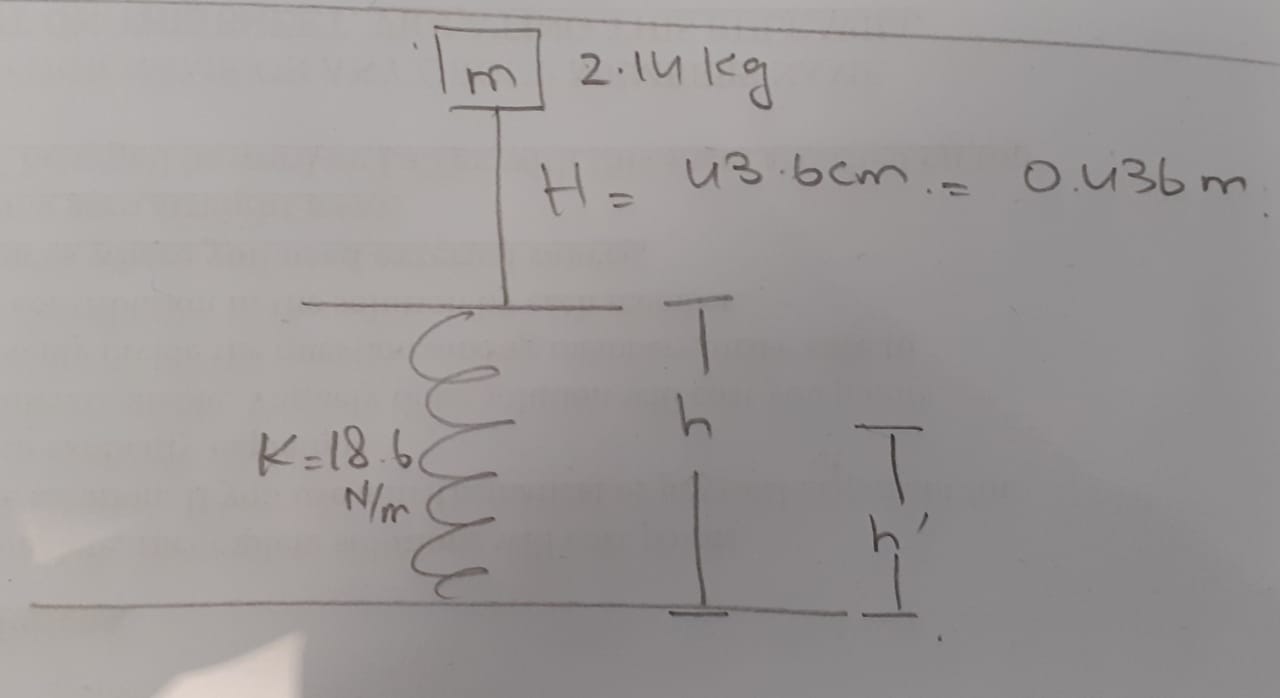 One has to determine the compression of the spring. $h'$ in the figure is the final height of the top of the spring after the mass has come to rest and $h$ is the initial height. So I applied the conservation of energy equation by saying that,$$mg(H+h) = mgh'+\frac{1}{2}k(h-h')^2$$ This can be rearranged to get, $$\frac{1}{2}k(h-h')^2-mg(h-h')-mgH=0$$ which is a quadratic equation in the compression term $(h-h')$ and can be solved easily with quadratic formula. But what if you used Hooke's law to determine the compression? In which case, $$F=W=k(h-h')$$ and then $$(h-h')=\frac{mg}{k}$$ which will give a different answer. If these two ways were consistent then substituting the later relation in the former energy equation, should give an identity but it does not.

I am missing some very obvious piece of the puzzle here but I can't figure out what that piece is.

There are two things wrong with the last equation.

First, it doesn’t account for the loss of potential energy $mgH$ of the falling mass.

Second, even if the weight were released on top of the spring instead of dropping it from a height H above the spring, the equation wouldn’t account for the change in potential energy that occurs during the compression. The correct equation in this case is obtained from the first equation by setting $H=0$, which is the equivalent of releasing the weight on top of the spring. When you do that you will get a maximum displacement of

The displacement in your last equation would apply if instead of releasing the weight on top of the spring, you were to support the mass on the spring and slowly reduce your upward force against gravity bringing the mass to rests at the maximum displacement of $(h-h’)= \frac {mg}{k}$.

In your second method you are incorrectly assuming that at maximum compression the system is in equilibrium where the forces cancel out. This is not the case.

Determine the spring force from the displacement found in your first method. You will see that it is larger than the object's weight.

If you want to go ahead and use forces, accelerations, etc. then you need to first determine the velocity with which the object hits the spring: $$v_0=\sqrt{2gH}$$

And then use Newton's second law to determine the acceleration as a function of position (down is positive, $y=0$ is at the top of the uncompressed spring ): $$a=\frac Fm=g-\frac kmy$$

This gives you a second order differential equation you can solve using initial conditions of $y(0)=0$ and $v(0)=v_0$ to get $y(t)$. From there you can find the maximum compression of finding $y(T)$, where $T$ is a time such that $v(T)=0$. I will leave this to you should you choose to do so.

Not the answer you're looking for? Browse other questions tagged newtonian-mechanics energy-conservation spring or ask your own question.

1
Why does this ambiguity arise?
13
How much work can a force on a spring do? (Why are two methods wrong?)

2
where did I lose the negative sign when spring is in compression in a mass-spring problem?
1
Finding max height of a mass launched by a spring?
1
Confused about relating spring force to maximum distance
3
Mass falling onto a spring from an inclined plane
3
Why do we include $x$ in this Spring Equation?
0
Does spring exert not force while in slack condition?