How many yellow objects are there? [closed]

I thought and read about color mixing today. I made some counterintuitive discoveries, and i now have some thought experiments which i cannot test.

I could print a yellow image but i use a different printing technique on each half. On the left side i use color which is true yellow(so yellow pigments which reflect yellow wavelength), on the right i use small red and green squares next to each other(not overlapping) which from afar appear also as the same yellow. So both sides appear yellow to me because my cone cells on my retina are tricked. if i am now holding a monochromatic yellow filter in front of me, the right side would appear black because red and green cant get trough the filter, and the left side would be ... still the same yellow. So i could now distinguish between the left and right side.

Every object has a spectrum of emitted light, which is a function $I(\lambda)$ that tells you the intensity $I$ of the light of wavelength $\lambda$ that is emitted by the object. Many different objects have many different spectra, and there are huge swaths of physics devoted to predicting, analyzing, and generally studying the spectra of various objects, from minerals to the atmosphere to stars and galaxies.

This makes it difficult to say what color an object is, because it's always emitting light composed of a bunch of different colors. That said, we can reasonably say that an object "appears a certain color because it is that color" when its spectrum is relatively sharply peaked in one color. A great example of this is a sodium vapor lamp, which gets its yellow color from the electrons in sodium atoms jumping between two energy levels. As such, its spectrum is very sharply peaked at 590 nm: 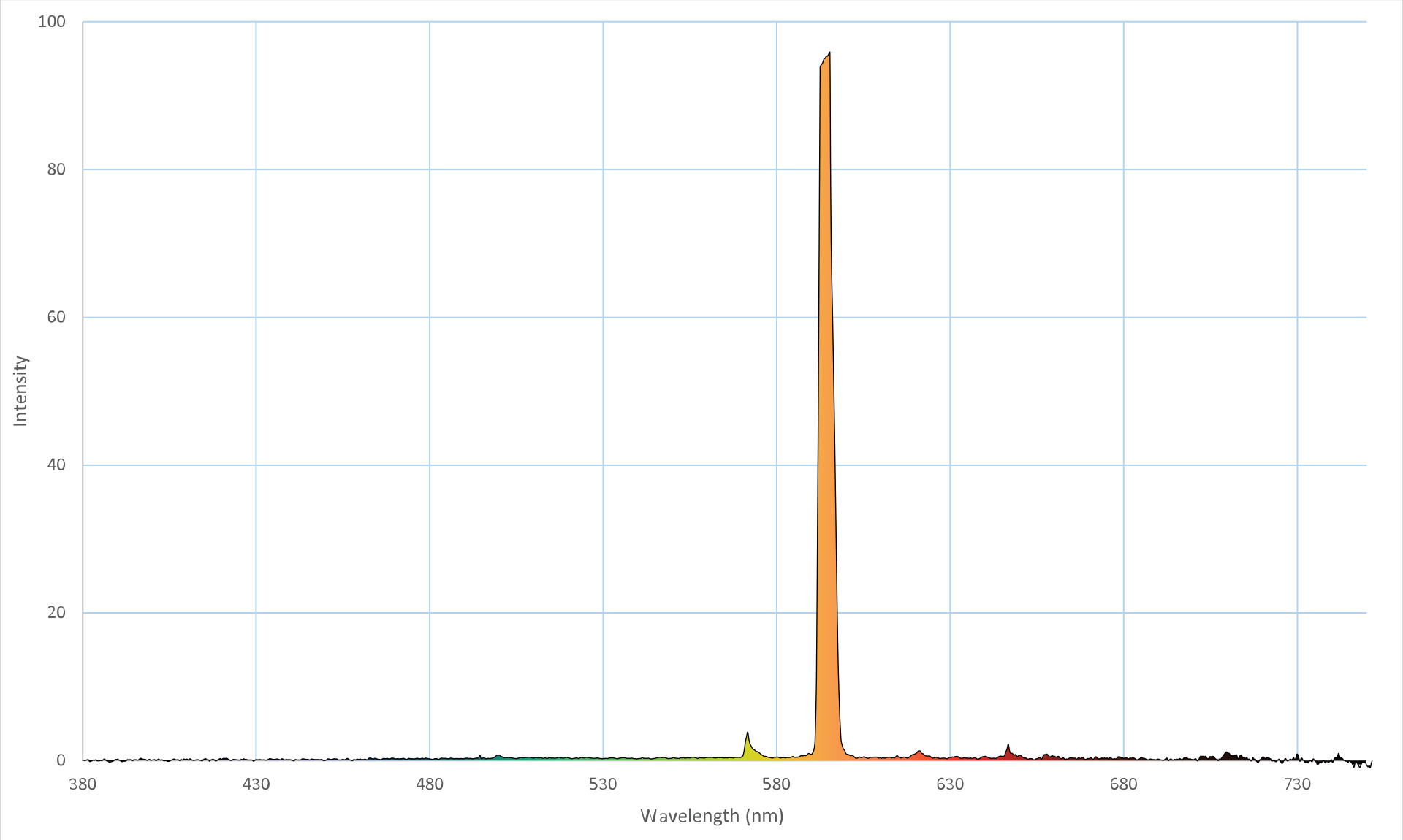 The above is an emission spectrum; the higher the points on the graph, the more intense the emitted light of that color is. For context, this is what the lamp looks like:

And for some more context, here are the spectra of a lot of other common light sources. Though they all look basically white, you can see that there are clear differences in their spectra that our eyes generally can't resolve: 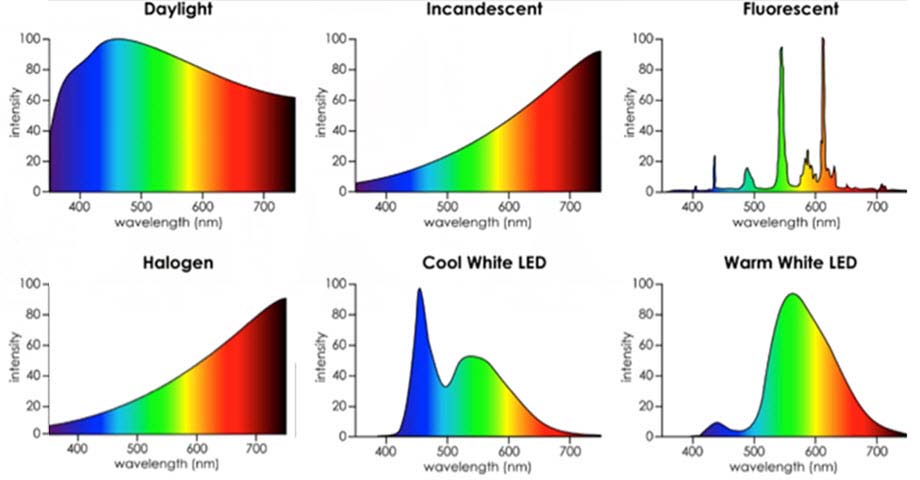 In contrast, one of the green pigments in grass and most plants is chlorophyll b, which has a much broader and more complicated spectrum. Below I present the absorption spectrum, which tells you how much light is absorbed by the pigment. The convention is reversed: the higher the points on the graph, the more the light of that color is absorbed, so the parts of the graph that tell you the color that you see are the low points: 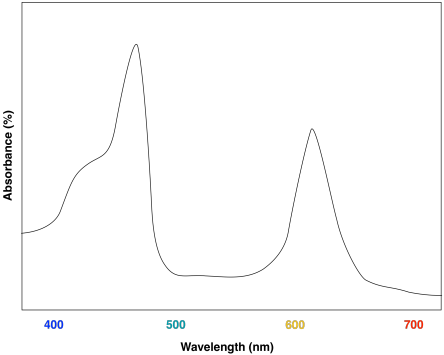 You can see from this graph that there are actually three component colors to chlorophyll b in the visible range: there's the obvious green color between 500-600 nm, there's a red portion past 650 nm, and there's a purple contribution from light lower than 450 nm. Your eyes take in this complicated red-green-purple mix and output "this looks green."

You'd see a variety of results.

Imagine illuminating a material with white light, and looking at the spectrum of light it reflects. Any "colored" material will have peaks and valleys in its reflected spectrum. The same is true of materials transmitting or emitting light.

The human eye samples this spectrum in three bands, but those bands are wide, with lots of overlap. As a result, it's easy to come up with two materials that look like they're the same color, but actually have very different spectra. That's why we can see "full color" images on screens that have only red, green, and blue emitters. Your thought-experiment red-and-green checkerboard would be another example.

Does this happen in the real world? Are there materials that look yellow, but are really only emitting/transmitting/reflecting red and green light? Sure -- display screens, see above, as well as "multi-color" LED indicators. In the natural world, it may be harder to find examples, because most things are mostly grey-ish (equally reflective at all wavelengths) or brown-ish (more reflective at longer wavelengths). But if I had the filter you're describing, I'd head for a large garden and start inspecting all the yellow flowers; I'll bet I'd find something interesting.

The quick answer would be that there are indeed many objects with different spectra that appear yellow to us.

A spectrum is mapped onto just three values by the eye; if one for example consider the CIE color space the $(X,Y,Z)$ values are integrals over the spectrum $S(\lambda)$ multiplied by particular kernels $\bar{x}(\lambda),\bar{y}(\lambda),\bar{z}(\lambda)$. One can make different spectra with the same $(X,Y,Z)$ coordinates by tweaking the spectrum.

0
How we are able to see red and green colored objects simultaneously if combination of red and green produces yellow?
4
Why does an yellow object absorb blue instead of all colors other than yellow?
0
What are the "real" primary colors and complementary color pairs?
9
If we use yellow light on a blue paper, what will the paper look like?
1
Yellow color, but not really - does it reflect pure yellow light
0
Wouldn’t a truly yellow object appear black in a picture?
0
How does a yellow colour filter work in the sense of RGB colour model?
1
Human colour perception – summary needed