How does one perceive light in terms of value?

I'm coming from learning art, and I'm trying to figure out the way light perception works.

If I got it right, in order to see the surface, it has to reflect rays of light in viewer's eyes, but the thing is: what if the surface is facing the light source, but it's tilted away from viewer's eyes?

For example we have two surfaces ("A" and "B"), "A" is facing the source light at 90 degrees and another ("B") is facing viewer's eyes at 90 degrees angle, while still facing the light source, although its value would be perceived darker by a viewer. How come we see the "A" surface as a lighter surface rather than "B"? 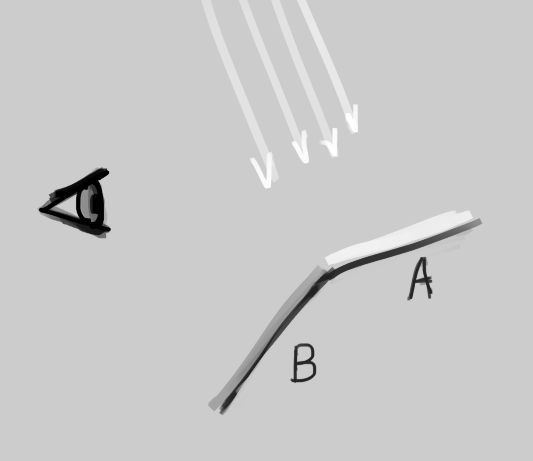 Given the picture, even if the surface "A" gets hit by more rays than "B" does, it looks like surface "B" is more capable of reflecting more rays in viewer's eye than "A" does. So why one still perceives "A" as a lighter surface?

But certainly the perceived brightness of a surface will depend on the angle we view it from. If you're currently indoors in a room with painted walls, depending how the room is lighted you might notice that the part of a wall facing directly toward you looks brighter than the parts you're viewing at an angle, for example.

Here is a more QM explanation:

In your case, the visible light we see from an object is mostly from its surface, there are two cases for visible light coming from the surface of the object:

Now it is very important to differentiate between specular reflection and diffuse reflection, because:

Yes it is possible, because walls are typically creating diffuse reflection. In the case of diffuse reflection, most of the visible wavelength photons are absorbed by the surface atoms in the lattice, and then re-emitted. Now in this case, the photons do not keep their original angle of incidence, and do not keep their relative angle nor their relative phases nor their energies. That is why in this case you do not get a mirror image, but a faded reflection.

Now there is one more thing in the case of diffuse reflection. With absorption and re-emission, it happens, that even non-visible wavelength photons get absorbed by the surface and then they are re-emitted in multiple steps, in different wavelength photons, some of which will be visible light. That is why that a wall facing away from you (but towards the light) might absorb more non-visible photons by the surface, and then those photons get re-emitted in multiple steps and some of them as visible light creating an effect as if the wall was brighter.

In this case, like a wall, or a material that has a lattice structure, it is basically depending on the structure of the lattice atoms, how they reflect the photons, in random ways, but these random ways might even create certain phenomenons, where the wall facing you will appear darker.

You know, there are those materials, where from a certain angle, you can see a picture, but not from a certain other angle. Now i just saw a car painting, that was made so, that from different angles, the car's certain parts appeared in different colors, and if you moved, the car appeared to change colors. These are just examples of the same thing.

You can create certain materials, with certain surfaces, where the surface, viewed from a certain angle, will reflect light so that it will appear in a certain color, and then from another angle in a certain other color.

Now in your case these colors could be a darker color for the wall facing you, and a brighter color facing a little bit away from you.

But normally, in case of a wall, that you are talking about, yes it is possible even without these special surface materials, to have an effect, where the diffuse reflection will make the wall facing you appear darker, and the wall facing a little bit away from you brighter, just because the angle of reflection is random and has nothing to do with the angle of incidence.

9
Purple doesn't occur in rainbow - or does it?
4
Why are most accurate reflective surfaces not white?
2
Space station illuminated by the Earth
19
How is it possible for other animals to have better night vision than humans, who can detect individual photons?
7
Is Light intangible to other Light? And how does all the intersecting light exist in space?
2
Why is polarised light so bright? if polarizing lens are made to dim the light
1
RGB LED makes colors more saturated?
0
Doubt in a figure which explains rainbow formation