An observer from ISS can find a rainbow forming under certain conditions ( of internal reflection /refraction) in a cloud of water droplets at the equator. It may be regarded as equivalent to a single reflection.

Now it is curiously noted the same angle $ ( \phi= 23.5 ) $ also defines tropics of Capricorn/Cancer for equinoxes.

Is this a pure chance coincidence of properties or are the phenomena in some way possibly linked ? Basis for such hypothesis : A large portion of the Earth is covered by water. Clouds thrown farthest at Equator by shear and centrifugal force may be seen as "most likely dense sources" of rainbows for LEO observers looking that way.

Has any such bright and/or colored regions been observed aboard the ISS ? If so, one need not wait for the rain for us to foretell at times.. you could perhaps see it all the time looking out of the window ! 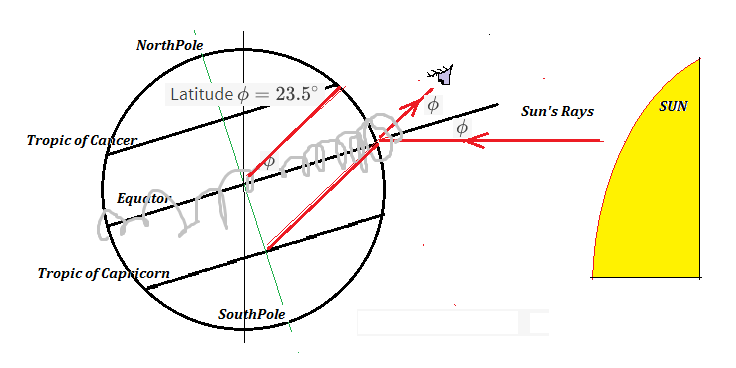 Is there some linking of two separate phenomenon? Appreciate any thoughts before an anticipated closure.

Browse other questions tagged refraction geophysics or ask your own question.