Is normal reaction a non-central force?

For an object of mass m to topple on a rough inclined plane, we consider the torques due to forces acting on it as shown in this figure: 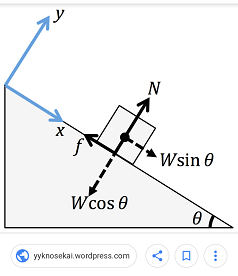 In the figure, we can see that forces along y-axis are cancelling each other. Hence, net torque about the bottom-right point of box would be, $\tau = Wsin\theta \frac{h_{box}}{2}$, which would be non-zero from the beginning of inclination!

But that's not true in practical. So, I thought that "normal reaction" should be a non-central force, which is again not true.

Help me to resolve this paradox.

Knowing that, you can even compute how big of a friction force you need to make the cube rotate. It's when the effective normal force is applied at the far right edge. Not so surprisingly, since the friction force also depends on the mass of the object, only the geometry of your object, the friction coefficient and the angle of the plane will determine if your object will suddently rotate.

Edit: The friction force relative position will also move with the normal force, but this effect actually decreases the torque from the friction force, which also helps the cube to not rotate.

0
Can a ball stay still while laying on a inclined plane?
0
Doubt related to rotational motion (rolling down an inclined plane)
1
Normal Force in Circular Motion
0
FBD of a cube moving with uniform velocity on a rough inclined plane
4
Normal force vs reaction force
4
Torque - Why does a block topple and net torque when net force is non-zero?
1
Why is normal force sometimes called “reaction force”?
40
What will happen to a ball kept on a frictionless inclined plane?