Problem statement. Consider a system of two coupled tanks as the one shown below

The underlying assumptions are that: 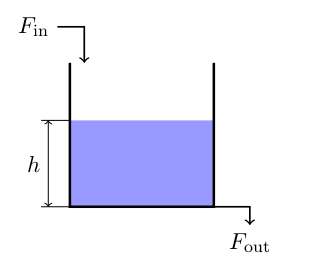 the level of liquid is described by

My first attempt. I tried to derive equations (1a) and (1b) using Bernoulli's principle (this is what the authors I cited above claim to do).

Then, by Bernoulli's principle from $A$ to $B$ we have

I guess there is something wrong with this approach because it clearly implies that $h_1 = h_2$.

Question. My question is how one can derive equations (1a) and (1b).

Equation 1a is a mass balance for the first tank. The last term is the flow out of the tank.

If you had a free outfall from the first tank, then applying Bernoulli's principle would give you an expression for the rate of flow though the hole at the bottom.

You can use that to get the last term in equation 1a.

Not the answer you're looking for? Browse other questions tagged homework-and-exercises fluid-dynamics flow bernoulli-equation or ask your own question.