How much of a wave function must reside inside event horizon for it to be consumed by the black hole?

Related to this question in astronomy SE (https://astronomy.stackexchange.com/q/30611/10813) and in particular my attempt to answer it, I started to wonder which fraction of a waveform (for eg a photon) need to be inside event horizon in order to make its escape impossible? As far as I understand, there is infinitesimal, yet non-zero part of every photon inside event horizons even right now.

You are thinking of the photon as an extended classical wave, which is not correct within the standard model of particle physics. Photons are point like quantum mechanical particles, and quantum mechanics is all about probabilities.

A photon approaching a black hole will have a calculable probability to fall through and be captured, or join the photon sphere. This means that a distribution of photons with the same energy and boundary conditions has to be accumulated in order to check the calculation.

A single photon is described by a wavefunction $Ψ$ and the probability of finding a single photon at an (x,y,z) is given by $Ψ^*Ψ$, it is the probability that is a wave in space, not the photon. An ensemble of photons in quantum mechanical superposition builds up the classical electromagnetic wave in space and time in a mathematically consistent manner, using quantum field theory. ,

First of all we need to establish what the question even means (I will restrict all formulas to non-rotating Schwarzschild black holes of mass $M$ for concreteness). There are no bound states of the electromagnetic field near a black hole, even quasi-stationary states of finite wavelength near the photon radius $r = 3GM/c^2$ will decay, a part falling into the black hole, a part to infinity.

So the question really is about scattering. It turns out that scattering of electromagnetic waves behaves differently based on wavelength. In SI units the wavelength is $\lambda = c/(2\pi \omega)$ and this is also the localization of the photon. For intuition we can picture the photon as a wavepacket localized in a sphere of radius $\lambda$. On the other hand, the typical length of the gravitational background is $GM/c^2$. The main parameter that controls the behavior of the scattering is thus the ratio of these lengths $(GM/c^2)/(c/(2\pi \omega))$. I will now switch to geometrized $G=c=1$ units and drop a $2\pi$ factor, and then the ratio of the wavelength to the size of the black hole is $\sim M\omega$.

For $M\omega \to 0$ the wavelength is much larger than the black hole, "a very small part of the photon is in the black hole". In this limit it can be computed that the total cross-section of an incoming monochromatic, asymptotically planar wave is $$\sigma = \left[4 \pi (2 M)^2 \right]\frac{4}{3}M^2 \omega^2 + \mathcal{O}(\omega^3)$$ It is difficult to interpret the leading-order term as some kind of "overlapping volume" of the wave and the black hole, since that would scale as $M^3\omega^3$. However, a sphere of radius $R$ will scatter particles with a cross-section $4 \pi R^2$. Taking a wave-packet with a centroid that would be classically absorbed by a rigid sphere of radius $2M$, the factor $4 M^2 \omega^2/3$ can be loosely understood as the probability it will actually be absorbed. Quite interestingly, the low-energy photon sees the black hole as a two-dimensional surface interacting with its wave-front rather than a three-dimensional volume.

However, this all changes with increasing frequency/decreasing wavelength. The intermediate regime is impossible to compute analytically, so I just put a plot from Crispino et al. (2007) here (I also recommend the paper for further references): 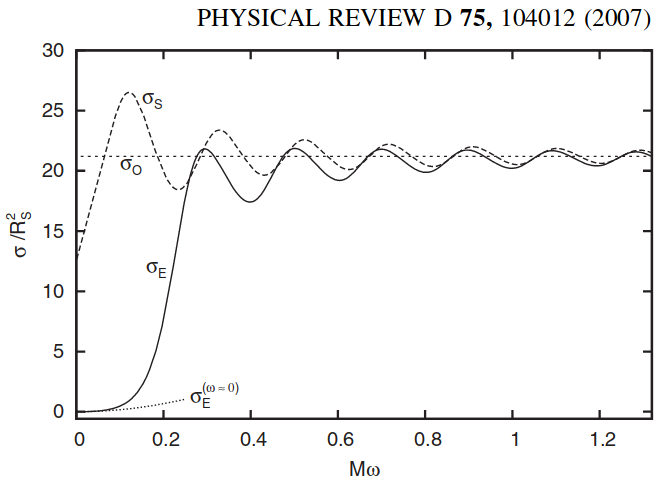 In the plot, $\sigma_\mathrm E^{(\omega = 0)}$ is the low-frequency limit given above, $\sigma_\mathrm E$ is the total cross-section of monochromatic electromagnetic waves (computed numerically), $\sigma_\mathrm S$ is the same for massless scalar waves, and $\sigma_\mathrm O$ is the optical limit which you get from considering photons as point particles $$\sigma_\mathrm O = 27 \pi M^2$$ It is now easy to see that once the size of the wavepacket is comparable or smaller than the black hole, you can simply use the following approximate intuition: If the wavepacket centroid is within the photon sphere, it is going to fall inside it.

Not the answer you're looking for? Browse other questions tagged quantum-mechanics black-holes wavefunction event-horizon or ask your own question.

1
What is the Critical impact parameter for photons of a black hole?

3
Quantum phenomena near black hole event horizon
9
Falling into a black hole – how can my perspective change from outside-observer to inside-observer?
2
Can any object pass into the event horizon of a black hole and then escape?
2
Thought experiment: ultra-fast outward push inside a black hole
2
What happens to light in the middle of a BH binary?
1
If black holes never form (like M87) then does this mean that theoretically we could decode light and information that is still coming out of them?
9
Two observers fall into separate black holes, then the black holes merge, can they meet again?