For which kind of nuclear reactions is the nuclear binding energy per nucleon appropriate?

The nuclear binding energy curve is often presented as a reason why iron is abundant in planet cores. However, to me it is not entirely evident why binding energy per nucleon, E/A, is chosen to assess the possibility of a nuclear reaction. Alpha decay is a counterexample where the E/A value results in ambiguity. One of the two decay products, the alpha particle, has a smaller E/A. So in general E/A is not a suitable predictor. For simple decay, ΔE = Emother-Edaughter is better than E/A.

The BE/A curve presents a visual qualitative average behavior for how tightly bound a nucleus of a given A might be. A-values which are lower on the BE/A axis have more mass energy per nucleon so that it's possible to move them, through some reaction, to a higher point and have a net gain of kinetic or radiative energy.

Alpha decay is a process which moves heavy nuclides to a lower A and generally higher BE/A value. Beta decays don't change A, so, due to the average qualitative nature or the curve, BE/A doesn't mean much.

Two main types of reactions which reflect the nature of the curve are fission of large A nuclides and fusion of small A nuclides. If fission of a large A (>234) nuclide can be induced (or if it happens spontaneously), the result will usually be two large fragments centered roughly around 2/5A (~94) and 3/5A (~140). Looking at the BE/A curve one will see that the BE/A values at those smaller nucleon counts are higher, indicating less mass energy in the system, and hence more kinetic or EM energy. 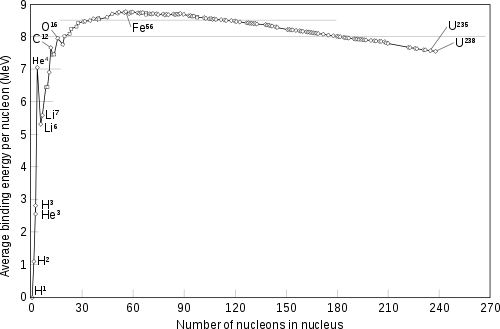 Fusion of light nuclides (A=1, 2, or 3), require the input of large kinetic energies, aided by QM tunneling usually, to create nuclides of A=4, 5, or 6, but the very large changes in the BE/A curve at the low A end of the curve results in a net output of energy. A=4 or A=12 can be fused in the extreme conditions of hot stars to move even further up the BE/A curve.

Not the answer you're looking for? Browse other questions tagged nuclear-physics mass-energy binding-energy or ask your own question.

11
How to explain $E=mc^2$ mass defect in fission/fusion?
17
Why are alpha particles such a prominent form of radiation and not other types of nucleon arrangement?
2
Stability of nuclides in regard to the forces acting upon its nucleus
2
Binding energy per nucleon error
22
Why is iron the peak of the binding energy curve?
1
Need help understanding a radioactive decay question