Why do many people say vector fields describe spin-1 particle but omit the spin-0 part?

We know a vector field is a $(\frac{1}{2},\frac{1}{2})$ representation of Lorentz group, which should describe both spin-1 and spin-0 particles. However many of the articles(mostly lecture notes) I've read, when they talk about the relation between types of fields and spins of particles, they'll always say something like

Is there a good reason to omit the spin-0 part of vector fields? If one really wants to talk about spin-1 only, why not talk about tensor fields in the $(1,0)$ or $(0,1)$ representation?

It's because 4-vector fields in the $(1/2,1/2)$ representation don't produce any spin-0 excitations, at least not in consistent theories.

Electromagnetism is the canonical example. The vector field $A_\mu$ would create both positive-norm ($A_i$) and negative-norm ($A_0$) polarizations. The latter is time-like. However, probabilities can't be negative, so for this electromagnetic potential as well as any other 4-vector field, there must exist a gauge symmetry that decouples the spin-0, timelike component. In fact, it decouples two components – the time-like one and the longitudinal one. The longitudinal one may get restored by the Higgs mechanism in the case of massive vectors such as the W-bosons.

At any rate, whether one talks about massless particles created such fields – e.g. photons or gluons – or about the massive ones such as W- and Z-bosons, there is no physical spin-0 polarizations which is why the massive ones in particular are known as vector bosons.

I believe that you are confusing SO(4) irreps with SO(3) irreps. The (1/2,1/2) representation of SO(4) is irreducible, so it corresponds to a single spin, spin 1. You get a vector and a scalar in the Clebsch-Gordan decomposition of two spinors of SO(3).

Of course, these two notions are related because the (1/2,1/2) irrep of SO(4) is formed from two spinors of SO(3), which I imagine is the source of your confusion. This means that under an SO(3) subgroup of SO(4) the vector will decompose as a product of an SO(3) vector and a scalar. For instance, under the subgroup of spatial rotations the space-like components of a 4-vector become a 3-vector and the time-like component becomes a scalar. However, Lubos has explained that in a good theory even the SO(3) scalar corresponding to the timelike component does not contribute any physical excitations. I'm not sure what answer you were looking for but I thought I should add this answer in case it was a simple case of mixing up SO(3) and SO(4) irreps.

The moral of the story is that you must always remember which group you are dealing. When people say that the (1/2,1/2) irrep corresponds to a spin 1 field they are talking about spin 1 of SO(4). When people talk about addition of angular momentum in quantum mechanics the group is SO(3).

It seems to me the following passage from Weinberg's book (chapter 5.3) clarifies the issue. 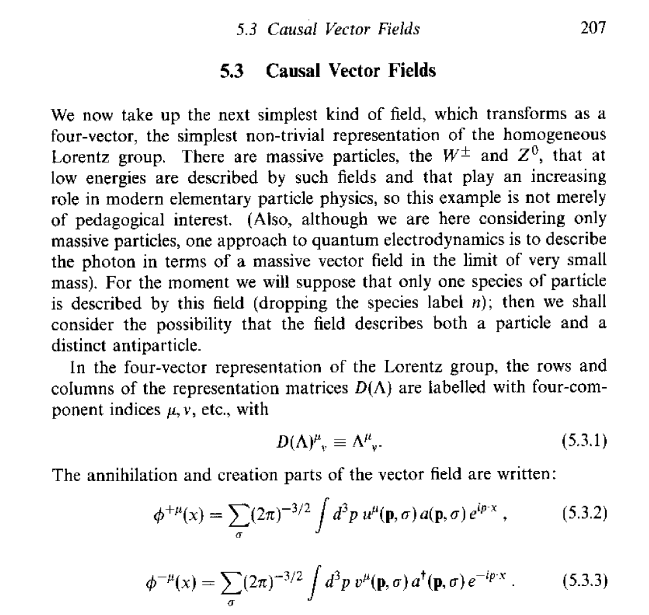 He then explains how to calculate these functions. Here is the result: 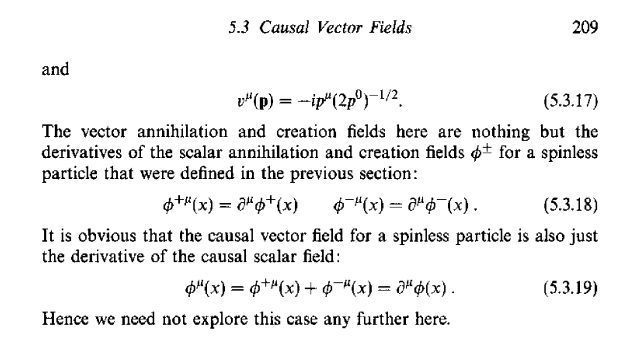 Not the answer you're looking for? Browse other questions tagged quantum-field-theory special-relativity angular-momentum quantum-spin representation-theory or ask your own question.

13
Meaning of spin
18
Why do we identify symmetric 2nd rank tensors with spin-2 particles in string theory?
2
From Maxwell equations, how do you derive that photons have spin 1

13
Meaning of spin
1
What is the explicit relationship between quantum fields and spin?
7
How many polarisation states does a spin $s$ particle have in $d$ dimensions?
2
What about the (1, 1/2), or (3/2, 1/2) representations of the Lorentz group?
0
Spin of the particle and degrees of freedom
0
Why are vectors in the $\left(\frac{1}{2}, \frac{1}{2}\right)$ representation of the Lorentz Group?
3
Particle as an irreducible representation
2
Link between $\mathfrak{su}(2)$ decomposition and Lorentz Lie algebra
1
What are the real Electromagnetic fields of Circularly Polarized Light?