What determines the direction of precession of a gyroscope?

I understand how torque mathematically causes a change to the direction of angular momentum, thus precessing the gyroscope.

However, the direction, either clockwise or counterclockwise, of this precession seems to me a bit arbitrary beyond mathematical definitions. (What if torque were defined by a "left hand rule", for example?).

What's the fundamental physical reason that the precession of a gyroscope would be directed in a certain direction?

OK, the direction of precession of a gyroscope.

The first image shows a gimbal mounted gyroscope wheel. From outside to inside there is a yellow housing and a red housing. 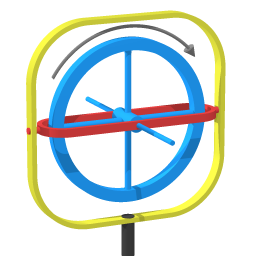 First I will discusse a state of uniform precession:
the wheel is spinning fast.
there is some swivel.

The second image shows a single quadrant. The idea is to think of that quadrant as having a fixed position relative to the red housing, with sections of spinning wheel moving through that quadrant 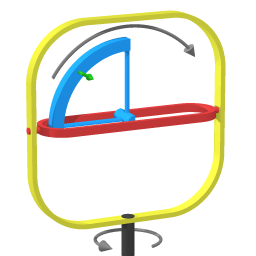 The mass moving through that quadrant is moving towards the swivel axis. Think of a point particle somewhere along the wheel rim, for example the point where the green arrow starts. That point is circumnavigating the swivel axis, with a corresponding velocity. Moving closer to the swivel axis that point will tend to pull ahead of the overall swiveling motion. 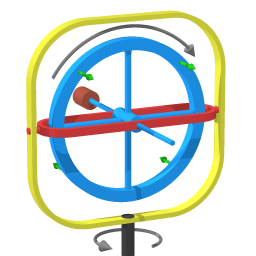 The brown cilinder represents a weight that tends to pitch the gyroscope wheel.

The green arrows represent tendency for each quadrant when the wheel is spinning and swiveling. The tendencies from the four quadrants combined add up to a pitching effect.

(Incidentally, given a spin rate and precession rate one can calculate the corresponding tendency to pitch by integrating the effect around the wheel.)

The key factor is motion. The tendency to pitch as represented by the green arrows arises if the wheel is spinning and swiveling. Likewise, when there is spinning and pitching then swiveling motion starts.

General remark:
Concepts such as the spin angular momentum vector are very powerful, but they are highly abstract concepts, and inaccessible to physical understanding. For understanding cause and effect one has to track down the physics in terms of force/momentum.

This explanation is adapted from the article about gyroscope physics that is on my own website.

(Initially I had given only links, hence the conversation between me and manishearth.)

Notice that angular momentum is assigned a positive or negative value based on a Foo-hand rule just like torque?

I belive that as long as you use the same hand for both direction you will get the same result for the direction of precession.

In other words, the arbitrary choice does not affect the physics, just our assignment of positive or negative values to some of the quantities.

Notice that I have not actualy said why the particulr direction occurs, but I haven't a good closed form answer, so I'll wait for someone else to cover that.

It basically is conservation of angular momentum that determines which way the gyroscope will rotate. The important thing to realize, is that angular momentum is a vector quantity, with certain magnitude, and direction pointing along the axis of rotation (again, apply right-hand rule).

The simplest model of a gyroscope that you can analyze using this equation, is a disk rotating on an axis, that is placed perpendicular to another axis (and gravity) at some distance. (Of course everything is rotating frictionless).

This question of the causation of gyroscopic torque (and its magnitude and direction) troubled me all my life until I had a 'Eureka' moment about 20 years ago. I have written up the explanation of this phenomenon on my website, www.newtontime.com, using nothing more than Newton's Laws of Motion and without any need for 'fancy' mathematics. The analysis is simply based on the geometric locus of a particle which is rotating about a spin axis whilst simultaneously rotating about a tilt axis. By simple numerical integration of all the forces (Mass x Acceleration) acting on all the particles of a spinning/tilting ring, it can easily be shown that a moment is developed about the third, mutually perpendicular, gyro-torque axis. The magnitude and direction of this gyroscopic torque accords exactly with the universally observed and agreed values.

The right hand rule is OK only for decelerating gyros. Say a horizontal disc spins clockwise as seen from above & observer viewing west edge pushes it down: For first 180 degrees average precession lowers north edge of disc but raises it for the next half turn. At constant rotation rate, north edge is back down to original elevation. If disc is coasting, hence decelerating, viewer sees south edge fall because more time is spent within even numbered half cycles than within previous (odd) half cycles. For accelerating disc, vice versa.

My explanation (I thought about gyroscopes for a week!):

Imagine bicycle wheel in your hands. Looking from the top upper part of the wheel is moving away from you and bottom towards you. The vector of acceleration (tangential) is pointing in the same direction as vector of (linear) velocity. Now you let your left hand off. If the wheel was not spinning it would fall in such a way that the top would move to the left and bottom to the right - so there is acceleration to the left acting on the upper part and to the right on the bottom.

Add vectors of acceleration (one from the circular motion and one from gravity). Now consider that net velocity must be in the same direction as net acceleration. You will notice that wheel precesses to the left (anticlockwise from top).

1
Gyroscopic precession force translated 90 degrees?
0
Is it the centripetal force due to precession that prevents a spinning wheel from falling?
13
How do you explain spinning tops to a nine year old?
9
What's the deal with the gyroscope?
7
Without using rotational mechanics, why does a gyroscope precess the direction it does?
-2
Antigravity force in powered precession gyroscope
4
What causes precession or nutation in a spinning object?
3
Is the torque on a gyroscope a conventional virtual force perpendicular to rotation?
3
Can an object rotate about two axes at once?
2
Gyroscope precession
See more linked questions