How to interpret phase diagrams?

I find quite difficult to interpret phase diagrams in general, for example I see people discuss them along the following lines:

In other words, these diagrams seem to be telling us everything about a given system in a very compact way.

As an example, let us take the following phase diagram [source] shown in terms of temperature vs density for a Lennard-Jones fluid in three dimensions: 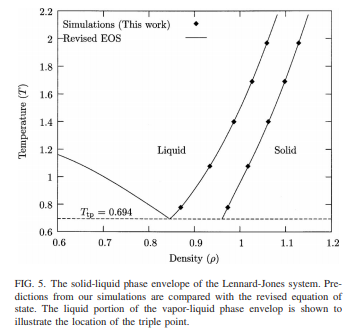 I agree with the commenters that this is a very broad question, and that you should start with some background reading, e.g. a textbook. Many standard Physical Chemistry texts give a good introduction to the phase diagrams of simple substances, and the Lennard-Jones system (although an idealized model) is fairly typical. The links provided by Jon Custer may also be helpful, but they are mainly concerned with systems of more than one component, so I would recommend starting with the simpler, one-component, case first.

I think that there's some value in doing what you wanted, and using the very specific example you have picked out from a simulation paper, to answer your questions. That paper is looking at the solid-liquid coexistence line: the "melting line". Plotted as a function of $T$ and $P$, it would indeed be a line (not, in general, a straight line, but a curve): along that line, the chemical potentials $\mu$ of the two phases would be equal, and the equation $\mu_\text{solid}(P,T)=\mu_\text{liquid}(P,T)$ will define a line in $P$-$T$ space. As you cross such a line, properties such as density $\rho$ change discontinuously (it's a first-order transition). Think of the lines in the $P$-$T$ diagram as marking these discontinuities. Like a crude topographical map, except that we don't mark out the contours of height, just the locations of cliff edges. A typical phase diagram in $P$-$T$ variables (but plotted, as is most common, with the temperature along the horizontal axis) can be found on the Wikipedia page.

If the phase diagram is plotted in temperature-density variables, the melting "line" becomes a coexistence region. In your picture, you'll see the dots on the two near-vertical lines come in pairs, which could be connected by horizontal lines. These are called "tie lines". They will be horizontal because the temperatures of the coexisting phases must be equal. The densities corresponding to the dots at the end of each tie line are those satisfying $\mu_\text{solid}(\rho_\text{solid},T)=\mu_\text{liquid}(\rho_\text{liquid},T)$. The general rule is, any state point $(\rho,T)$ in the two-phase region does not correspond to a stable phase, but to a mixture of the two phases $(\rho_\text{solid},T)$ and $(\rho_\text{liquid},T)$ , whose densities can be read off from the points at either end of the tie line. When plotted in other variables, in more complicated situations, it may be that the tie lines are not horizontal, and are actually drawn on the phase diagram, to help people make this construction.

The line going from $(\rho,T)\approx(0.84,0.694)$ up to $\approx(0.6,1.15)$ is the right hand boundary of the liquid-gas two phase region. If we extended the plot to lower density, the curve would continue to rise up to the critical point, at about $T=1.3$, and would then come down again, reaching $T=0.694$ at a very low density. There should be tie lines drawn horizontally across this region as well, corresponding to the coexistence densities of liquid and gas.

You'll see the horizontal dashed line at $T_\text{tp}=0.694$. This is the triple point, at which liquid, gas, and solid are all in equilibrium. Nothing much is shown below that temperature (this is not the interest of the authors of that paper). In fact, there will be yet another two phase region: solid-gas. This extends from a near-vertical line at very low density ($\rho_\text{gas}$) across to a near-vertical line extending downwards from roughly $\rho=0.96$ ($\rho_\text{solid}$). To the right of that region would be solid (one phase); to the left of that region would be gas (one phase).

The one-phase regions in the diagram are labelled "solid" and "liquid". The combinations $(\rho,T)$ of points in these regions correspond to a single stable phase. In the "liquid" region, for any temperatures higher than about $1.3$, it would be better to refer to the phase as a "supercritical fluid", since we do not distinguish between liquid and gas above the critical point.

I think there's not much more to be said about that particular diagram, but hopefully it has clarified things a bit. There is no tricritical point (you should not worry about those, until you've studied phase transitions more deeply) and in most circumstances phase diagrams show equilibrium phase boundaries rather than "metastable zones", so I would suggest putting those on the back burner too.

50
What's the rigorous definition of phase and phase transition?
5
What causes a eutectic point?
1
Equation of state of Lennard-Jones spheres

2
Does thermodynamic processess affect phase transition in solid state metals
2
Lennard Jones liquid vapour phase transition
1
What does the behavior of the pair correlation function look like in the vicinity of the critical point?
1
Meanings of the word "phase"
0
Stability, unstability (and metastability) in liquid-gas phase transition: unstable in regards to what?
0
Phase diagram. When will I have a phase transition?
11
What is the topology of a phase diagram?