How much in the past are we viewing the accretion disk of a black hole?

Sine the gravity near a black hole is so high, the time moves slower than the observer(in our case we from the earth).In that case, imagine if are viewing a black hole's accretion disk(the innermost rim) a million light years away and if we are observing it now then since it took the light a million years to reach us, we are looking at the past state of the black hole(how it was a million years before). But light is traveling in time that is faster than it used to the moment light escapes the event horizon.

So if we imagine one photon at a time, the first photon reaches us and then as we observe the second photon, we have moved so much into the future as our time travels faster compared to the time the photon originated.

Are millions of years old black holes actually even more older than they appear to be?

Consider the following. You ask a young volunteer to come to live near a black hole, where time passes much slower. You observe them to age much less than you. Are they "stuck in the past"? It might seem so, since you were their biological age years ago. But this is not the correct interpretation, because at one point they can get on a rocket and come greet you. Surely they have not "arrived from the past", since they could have come to you at any point, and you could have come to them as well. So it really makes sense to talk about things happening synchronously, at the same time at your location as near the black hole. So really, the most accurate thing to say is that time passes slower near a black hole, but still we can synchronize!

Another, somewhat more everyday example. The Earth has formed some 4 billion years ago. The difference in the gravitational field at one position on the surface of the Earth and another one about one meter higher causes time to flow very very slightly differently. To be precise, the difference is about one second less flows one meter lower in $10^{16}$ seconds. But guess what, 4 billion years is $\sim 10^{17}$ seconds, so some $\sim 10$ seconds less have elapsed per every meter lower you go since the birth of Earth.

But now take a look at your feet. Are you looking ten seconds in the past? Are your feet traveling in and out of the past as you swing on a swing? Of course not. You are looking at things that happen (almost) synchronously in every physically meaningful way. So once again, slower flow of time means exactly that, clocks tick slower, but the notion of synchronicity can stay!

The additional question you are asking can be formulated in the following way: How longer will it take for a photon fired off from near the black hole to arrive then when a photon would be fired off from the "same position" without the black hole nearby? Notice that I put the "same position" in quotation marks, because the translation dictionary between a position near a black hole and a position in the space-time without the black hole will not be unique. We are after all in curved space-time, and the geometry is simply different from Euclidean space!

There are other definitions that can be used. For instance, you define distances by how much string of vanishing mass you have to use to reach a certain point. Then you would get that signals from the "same points" in the black hole geometry do arrive later than in a Minkowski one. The precise numbers will depend on your translation dictionary, but for reasonable choices and for light sources orbiting at astrophysically realistic distances from the black hole, the time delays will be of the order of $10 \mu {\rm s} (M/M_\odot)$, where $M$ is the mass of the black hole, and $M_\odot$ is the solar mass. If you plug in the mass of M87 observed by the Event horizon telescope, you get a delay of the order of days.

If the true shape and texture of the accretion disk (viewed from 45°) around a rotating black hole at the time when the photon whose origin is closest to the observer is emitted is this: 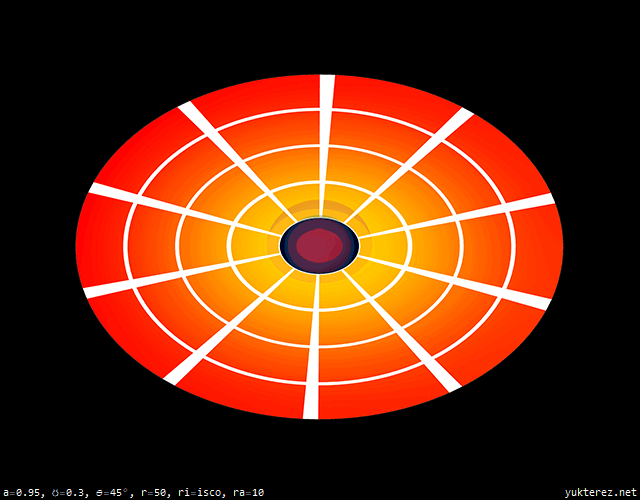 and the rings of which the disk is composed of are rotating with the prograde orbital velocity, taking the light travel time and the counterclockwise rotation of the disk components into account the observed distortion would be 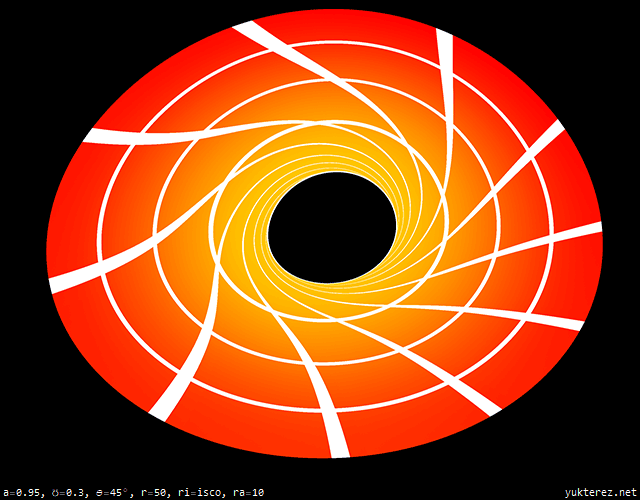 As you can see the inner parts of the disk are observed farther in the past than the outer parts, therefore the clockwise distortion. If the texture of the disk was static in a way that the radial white stripes would represent constant φ, the observed distortion would look like 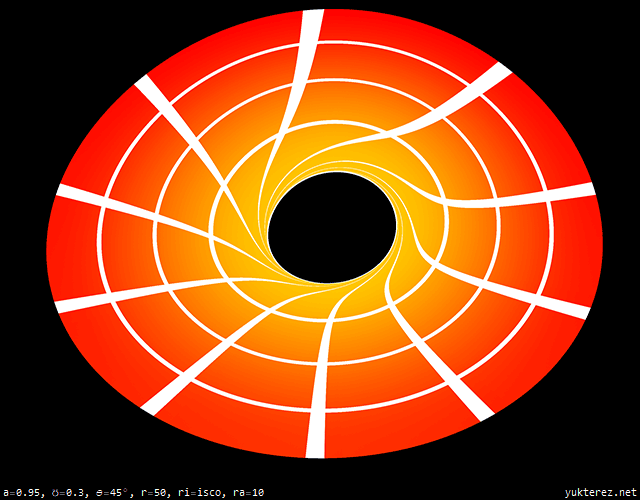 That's also how it would look if all the photons would need the same time to reach the observer, but still took the curved paths. The images were generated with the relativistic raytracer from here. The redshift is not shown above, since some colors would shift outside the visible spectrum: 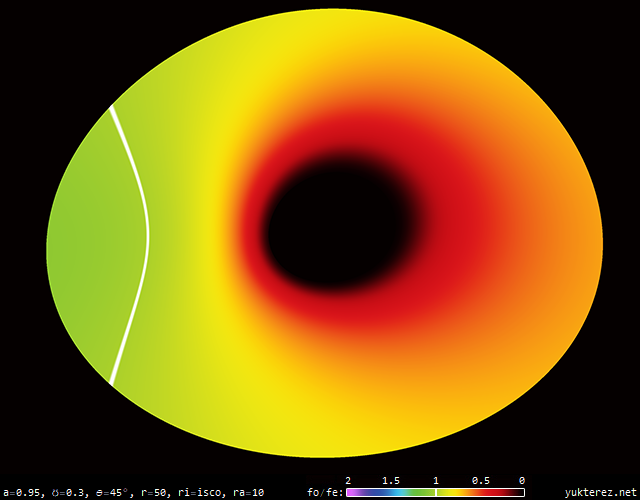 The white line in the green area marks the parts which are neither redshifted nor blueshifted. If there is enough space between the atoms that light can shine through, you would see some even older images of the disk getting bent around the photon sphere:

For the correspondig texture renderings with a transparent disk see here.

Not the answer you're looking for? Browse other questions tagged general-relativity black-holes astrophysics astronomy or ask your own question.

96
How can a black hole produce sound?
31
Is there a limit as to how fast a black hole can grow?
30
Could the black hole in the center of the galaxy be a white hole?
2
What is the closest distance for an undiscovered black hole?
0
Anatomy of a black hole: which are its layers?
1
Is the Accretion Disk of a Black Hole just an illusion?
1
Are the particles in the accretion disk in free fall around the black hole?