Kinematics and dynamics of a crashing satellite

I'm trying to understand the forces that act on the satellite that secure this outcome. 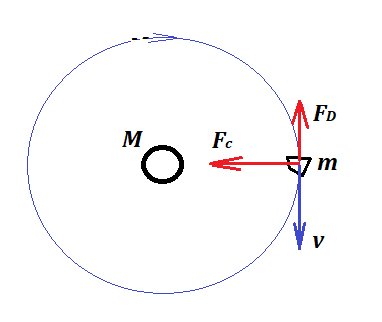 But there's a snake in the grass: the tangential velocity $v$ is given by:

So, as is well known, smaller orbits run at higher tangential speeds, not lower!

Or take another scenario, in which a thruster on the satellite briefly exerts a force parallel and in the same direction as $\mathbf{F_c}$, thereby 'pushing' the satellite inwards. In accordance with $(1)$ we'd expect $v$ to increase. But where is the force that causes this tangential acceleration?

Can anything be gleaned from energy conservation? Call $T$ the total energy of the system, $U$ its potential energy and $K$ its kinetic energy:

For a stable, circular orbit:

Which fits because in the case of the drag force:

But it doesn't enlighten much.

I think due to the friction the orbit becomes elliptical: 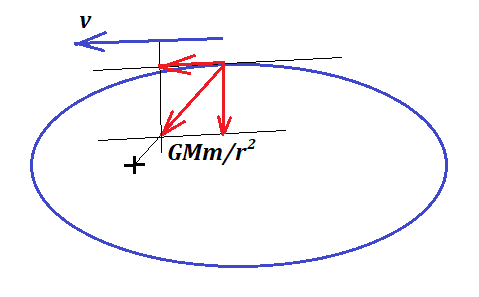 This way the attractive force $\frac{GMm}{r^2}$ can be decomposed into a Normal component and a tangential component.

But it remains unclear what's the dynamic (forces) that causes the orbit to transition from a higher, circular orbit to a lower elliptical one?

This answers only the 'brief impulse' part of the question. If you start with a circular orbit then we have an expression for the magnitude of the orbital velocity:

If you then apply a brief impulse to the satellite such that the magnitude of its velocity is $v \ne v_c$ without altering its direction, then it enters an orbit such that its velocity at that radius would:

There is always such an orbit, but it is never circular. In the case where $v \le v_c$ then the orbit will be some kind of ellipse with its apogee at the point where the impulse was applied. We can work out what the ellipse is by using the expression for the orbital velocity of an elliptical orbit:

Where $r$ is the current radius and $a$ is the semimajor axis. Note that this reduces to the expression for a circular orbit when $r = a$ of course. Rearranging this we get

This tells us $a$, and this means we know both the apogee distance ($r$) and the perigee distance ($2a - r$) which is enough to characterise the orbit.

More generally, if you apply an impulse such that the velocity changes in direction as well, you end up in the orbit which would have that velocity at that radius (or, more fussily, at that position). Again there is always such an orbit, but solving for it is harder.

Because gravity is a force, and hence can change energy, it’s generally not useful to directly think about orbital velocity. Velocity behaves differently in orbit than in does on the surface of the earth. Your intuition can be misleading.

Yes, a lower orbit has a larger velocity. But it has a smaller energy! Hence friction, which reduces energy, puts an object in a lower orbit.

Consider an instantaneous impulse of friction. It lowers the velocity at that point in the orbit. It’s now too low for a circular orbit, so starts to “fall” to a lower height as it goes around the orbit. But that allows gravity (now acting partially along the velocity vector) to speed the object up. At its lowest altitude, it’s now going too fast, and starts to rise up, eventually reaching the original point: the orbit is now an ellipse instead of a pure circle.

Note that the speed increased, the average height went down, and after the friction loss of energy, the total energy stayed constant.

But it remains unclear what's the dynamic (forces) that causes the orbit to transition from a higher, circular orbit to a lower elliptical one?

At first, when velocity is consistent with circular orbit and we suddenly introduce friction force, this new force is the only force that does work on the satellite. This work being done is negative and this lowers the speed below that necessary for circular orbit, therefore the satellite will getting closer to the center (due to attraction of gravity force).

But where is the force that causes this tangential acceleration?

As the satellite is moving towards the center, the gravity force does positive work on it, thus it increases its kinetic energy (and speed).

After the distance decreases from the initial circular orbit, net force has always non-zero component in the same direction as velocity. This component is due to gravity force, the friction force cancels it only partially.

Not the answer you're looking for? Browse other questions tagged homework-and-exercises newtonian-mechanics newtonian-gravity orbital-motion satellites or ask your own question.

5
What is the trajectory of a satellite the speed of which in circular orbital is reduced instantaneously?
2
Friction and satellites

0
Change in speed of a satellite
0
Newton's gravity formulas for ellipses
3
Air Drag in orbit
0
Orbital mechanics: will a satellite crash?
4
Velocity of satellite to crash into the earth
5
Satellite in Elliptical orbit
1
Formula for perihelion speed as a function of circular speed and eccentricity
3
My question is about satellite motion and gravitation
0
What additional velocity must be imparted to an orbiting satellite so that it leaves the earth's gravitational pull?