How does rest mass become energy?

I know that there's a difference between relativistic and rest mass. Relativistic mass is "acquired" when an object is moving at speeds comparable to the speed of light. Rest mass is the inherent mass that something has regardless of the speed its moving at.

When fusion happens, a certain percentage of the rest mass of two hydrogen atoms is converted into energy. I understand that $E = m_{rest}c^2$.

How does the rest mass of an object turn into energy? Does this involve particle physics? Doesn't this suggest that rest mass can be viewed as some sort of potential energy? It seems to me that it's a sort of locked energy that has to undergo a certain process to expel its energy to surrounding particles.

Also, Why does only a small percentage of rest mass turn into energy? Why not all of it. What dictates how much rest mass gets converted into energy?

If I'm reading rightly, I think your main question is:

Why does only a small percentage of rest mass turn into energy [even for fusion]?

It's because the universe is very strict about a certain small set of conservation rules, and certain combinations of these rules make ordinary matter extremely stable. Exactly why these rules are so strictly observed in some cases, and less so in others, is just something that is observed experimentally. But it's a good thing these conservation rules exist, else we would arguably would not be here talking about them. The universe would instead at best be nothing more than a huge, structureless ball of free energy.

These conservation laws most often express themselves as pairs of properties that cancel each other out. However, each of these paired properties in isolation is extremely stable and cannot simply be "undone" or removed from our universe. Examples include: electrical charge, for which you can create equal amounts of positive and negative charge together, but never in isolation; linear momentum, for which Newton identified a conservation pairing by noting that "for every reaction there is an equal and opposite reaction; and angular momentum, where one example of pairing occurs if you try to twist around too quickly while sitting on a swiveling seat, which can cause the seat to rotate in the opposite direction from what you intended.

The particles that make up ordinary matter are subject to some additional more subtle conservation rules that describe the mathematical structure of the particles. These rules are covered by the Standard Model of particles physics, but unfortunately are not expressed in a way that is easy to understand.

Nonetheless, I'll try using one somewhat risky geometric analogy to explain the net impact of the conserved mathematical structures of the Standard Model. Take a short rod and coil some number of loops of wire around it in a helix, fixing the ends so they cannot slip. The resulting structure is either left-handed or right-handed, depending on how you coiled the wire. Notice also that short of unwinding it, the coiling direction (either left or right) of the wire has become a permanent feature of what you created, in the sense that you cannot remove it except by explicitly unwinding it.

Now place two such rods end to end, one with a left-handed coil and the other with a right-handed one, soldering the ends of the wires together where they touch. You now have a quite different situation, since if you pull straight hard on the ends of this new combined spool, the two coils will cancel and the wire becomes straight. Your two "structures" (left and right coiling) have in effect canceled each other.

You won't find any such simple structures within the Standard Model, alas. Yet arguably a similar idea applies there too, even if in a more abstract fashion.

That is, a particle of ordinary matter in the standard model is also "stuck" in an abstract structure that cannot be undone without first gaining access to a "mirror image" structure in an otherwise similar particle. Like the coil of wire around a rod, this abstract structural property of each such particle is conserved as long as the particles remain isolated from each other. But when such structure-canceling particles do meet, the rest mass of both can be released and the equation $E=mc^2$ becomes fully applicable.

The particles with mathematically cancelling structures are called, appropriately enough, antiparticles, and in large quantities they form antimatter. Thus one could also say that rest mass is just as "available" for $E=mc^2$ use as any other form of potential energy, but that the curious lack of large quantities of antimatter in the visible universe ends up protecting the rest mass of ordinary matter in most circumstances.

How does the rest mass of an object turn into energy? This article explains the answer. I didn't summarize it because I'd have to basically quote giant portions of the article. Yes it involves particle physics, suggests that rest mass can be viewed as some sort of potential energy and seems like a sort of locked energy.

Why does only a small percentage of rest mass turn into energy? Why not all of it. What dictates how much rest mass gets converted into energy? I think you’re referring to binding energy. “This nuclear binding energy (binding energy of nucleons into a nuclide) is derived from the nuclear force (residual strong interaction and is the energy required to disassemble a nucleus into the same number of free, unbound neutrons and protonsit is composed of, so that the nucleons are far/distant enough from each other so that the nuclear force can no longer cause the particles to interact” quoted from Wikipedia.

How does the rest mass of an object turn into energy?

Doesn't this suggest that rest mass can be viewed as some sort of potential energy?

Rest mass is energy. Most of the mass in the universe is from quark's interactions with the gluon field (kinetic and potential energies), some is from elementary particles' interactions with the Higgs field (still energy), etc. These things all give objects inertia. However, electric potential energy also gives objects inertia. So does thermal energy and regular kinetic energy. There is just not so much of it in the world, so it is hard to notice their effects on something's inertia. (The energy trapped in an atom is very stable and gigantic, so it appears to be the only cause of inertia.)

So what you call mass turning into energy is actually energy from the gluon field turning into thermal, light, and sound energy. Either way, it is still mass, since all energy is mass. Or a better way to phrase it is mass is a property of energy. Asking how mass turns into energy is like asking how the greenness in a tea bag turns into tea. It was tea in the first place, and it's still green.

Relativistic mass is "acquired" when an object is moving at speeds comparable to the speed of light. Rest mass is the inherent mass that something has regardless of the speed its moving at.

Rest mass does include kinetic energies, but it only includes relative motion. For example, if two balls are moving with the same velocity, their motion does not contribute to rest mass. However, if they are moving towards each other, there is relative motion no matter what reference frame you choose, so the kinetic energy contributes to rest mass. Also, technically, inertia is relativistic mass, which is proportional to total energy. However, it is annoying that it depends on the reference frame, so we usually use rest mass.

As for the other questions, the other answers provide quite adequate explanations.

Fig1 indicates mass(M) is moving with representative velocity V in the standard inertial frame-a. P(=MV) is also a representative momentum. When M is observed from frame-b, Mo is at rest in frame-b. Equation (3) indicates Mo is made of a lot of small relativistic masses. vi' is the velocity of individual mass(mi') in frame-b. In the actual world, mass(Mo) is made of moving molecules and its total momentum is zero although internal momentum(pi=mi'vi') is not zero.

vi' of ordinary material is by far smaller than elementary particle. Then, dMo is small because vi' is originally close to zero even if vi' is reduced to 0. In order to turn a large quantity of Mo into visible energy, mio also needs to be turned to energy. Equation (4),(5),(6),(7) indicates that repeating decomposition makes it possible to turn rest mass(Mo) into energy. Finally, material could be turned into photon energy.

Don't forget following fact. Combined mass which is composed of relativistic masses and forms zero momentum is a sort of rest mass(Mo,mio,....and so on). 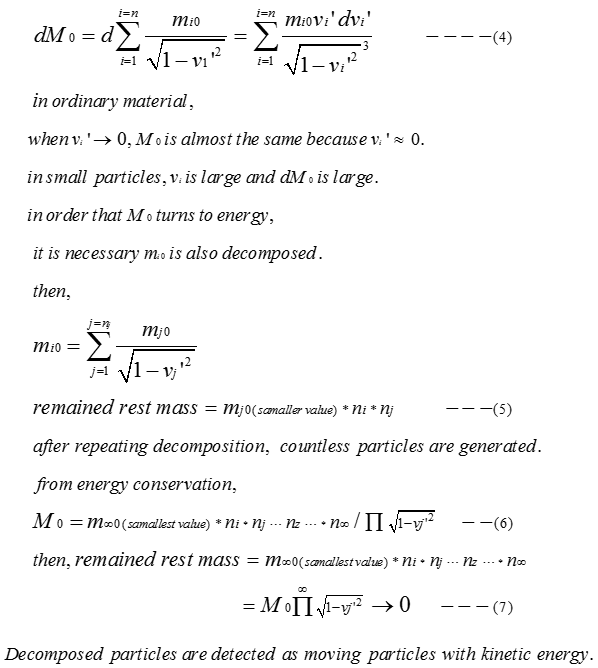 See the detail of explanation on web-site. miyajiphysics.info

Not the answer you're looking for? Browse other questions tagged nuclear-physics energy-conservation mass-energy binding-energy or ask your own question.

3
How does energy convert to matter?
1
What are good examples to demonstrate Einstein's mass-energy relation
1
How does matter turn to energy at the atomic level?
0
Can mass be totally converted into energy?
1
What is the role of the speed of light in mass-energy equivalency?
10
Mass defect- From where mass is being lost?
2
Conversion of mass and energy
1
Dirt energy, possible?
1
How does rest energy $E=mc^2$ follow just from special relativity?
0
Where does mass deficit energy go?
See more linked questions

18
Conversion of mass to energy in chemical/nuclear reactions
2
The "binding energy" of bonded particles adds mass?
1
Question on energy mass conversion
3
If rest mass does not change with $v$ then why is infinite energy required to accelerate an object to the speed of light?
2
Mass-energy conversion mechanism in supernovas
0
Is the sun losing rest mass or relativistic mass?
0
Relativistic Mass when Viewed from Different Frames of Reference
0
Sources of Mass in Special Relativity
0
Potential energy, mass transformation in energy? and nuclear reactions?