It would seem that the inverse square law, popularized by Isaac Newton, is only true for masses which have no dimensionality and are a single point. In other words, it is only an ideal, not a practical reality. For example, imagine we have a small satellite, X, orbiting a much larger body: 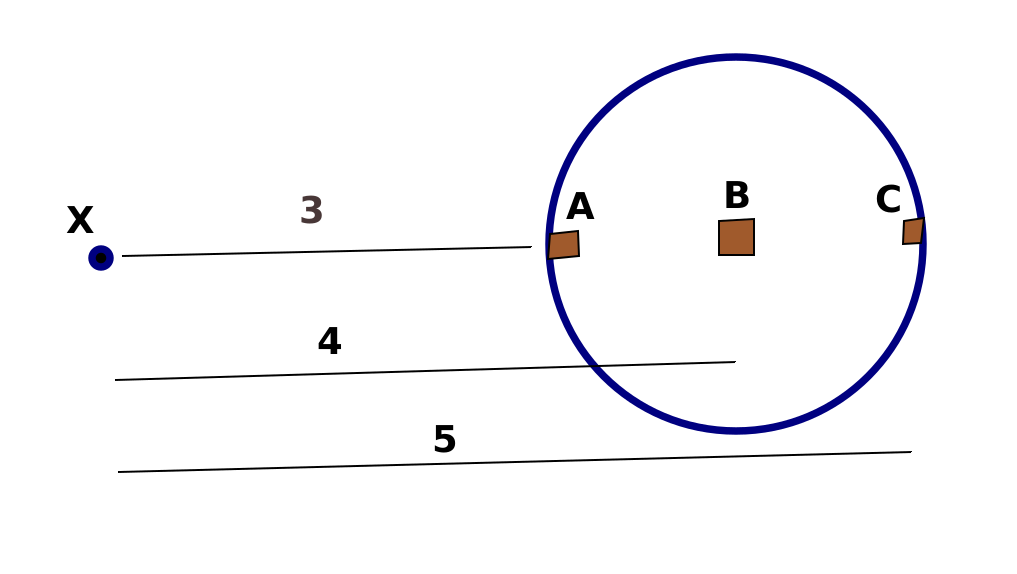 We can extrapolate this same basic argument to every pair of symmetric elements of mass which comprise the planet. Therefore, the force between X and the planet is different than if all the mass of the planet had been located at B.

From this example, it would appear that the inverse square law of gravitation is not accurate in real scenarios, and that the closer a satellite is to its host, the less accurate the law is.

Is there some more accurate equation that more accurately represents this state of affairs, or is brute calculation by integration of finite elements necessary?

The inverse-square law depends, essentially, on the fact that the source "looks" the same to the object being attracted thereby, no matter where it is at in relation. If it can "see" a bump nmming it from one direction than from another, it will feel more force from that bump than otherwise, even while being at the same distance from the center of mass, hence violating the inverse-square law. E.g. a bilobate asteroidal/cometary object like the recently-discovered "Ultima Thule" with one lobe nning at you, versus being at the same distance but "seeing" it sideways.

For a spherically-symmetric mass, you can actually show that Newton's law holds in its usual form. This can be done through a gravitational analogue of Gauss's law for electric fields:

where $S$ is a closed surface enclosing the mass (can't write that funny circle thing around the integral here properly, sorry) and $M_\mathrm{enc}$ the enclosed mass. Alternatively, you can just integrate Newton's law, but that's not as nice.

It's also important to point out that the spherical symmetry must not just be in the gross shape of the mass, but also in its density distribution. In fact, the gravitational field of the Earth is non-spherically symmetric and so non-inverse square for near-Earth objects chiefly because of such inhomogeneities within it than anything else - a fact that shows up if you look at a "geoid", effectively a map of the shape of the Earth's gravity field, used in cartography to set a precise meaning to the term "sea level". This, despite that Earth's gross shape is as good if not a better sphere than many "spherical" objects you can hold in your hands.

(Note: another, but so far purely hypothetical or fantastic, possibility, but arguably more dramatic, way to violate it would be if there existed negative gravitational masses [likely violating Einstein's theory]: these would permit the creation of 'gravitational dipoles' [i.e. a non-removable gravitational dipole moment] that would be analogous to electric dipoles and so would have an inverse-cube law.)

ADD (see comments): As a note, this result is also a case of the famous shell theorem and was proven by the founder of classical mechanics, Sir Isaac Newton, himself. The above is a more modern approach to deriving the result.

ADD 2: I notice that an explanation has been sought, not only for the correct mode of proof of the inverse-square behavior for an extended spherically symmetric mass, but also for why the OP's attempted proof thereof is erroneous. The basic reason is that the essential characteristic - the inverse-square law - of the spherically-symmetric behavior cannot be analyzed in terms of the behaviors of its parts individually: it only appears when you add them all together, holistically, at least up to the point of attaining full spherical symmetry. The two mass elements selected from the sphere being symmetrical about its center is not enough. Because while they, together, have some symmetry (namely $\mathrm{O}(2) \times \mathbb{Z}_2$), they do not have spherical symmetry. Thus, alone, they will never be entirely replaceable by a point concentration as you try to do and you can only be misled as to the whole behavior thinking about them alone, individually. This logical error actually has a name: it's called the fallacy of the composite - assuming that a composite system necessarily has, or "inherits", the same properties as its parts. It doesn't, or, if it does, that has to be proved, and not simply deduced from the fact of its composition thereby.

(Well actually, you can break it up, but you have to "peel it like an onion" into spherical shells. I don't include this because it is, in effect, "trivial": the 'good part' - i.e. the fundamental difference between spherical symmetry and non-spherical - is already there once you do that, as it has to be, and thus has no real explaining or proving power, I'd say. At best, it could be the final step in a proof, but not the most meaty step.)

Not the answer you're looking for? Browse other questions tagged forces newtonian-gravity or ask your own question.

55
How does gravity work underground?

12
Intuitive explanation of the inverse square power $\frac{1}{r^2}$ in Newton's law of gravity
2
Force inversely proportional to the squared distance
1
Inverse Square Law and extra space dimensions
1
Why do inverse square forces not rise asymptotically for $r\to 0$?
6
Confusion in the deduction of inverse square law of current elements