Impulse on a Gyroscope 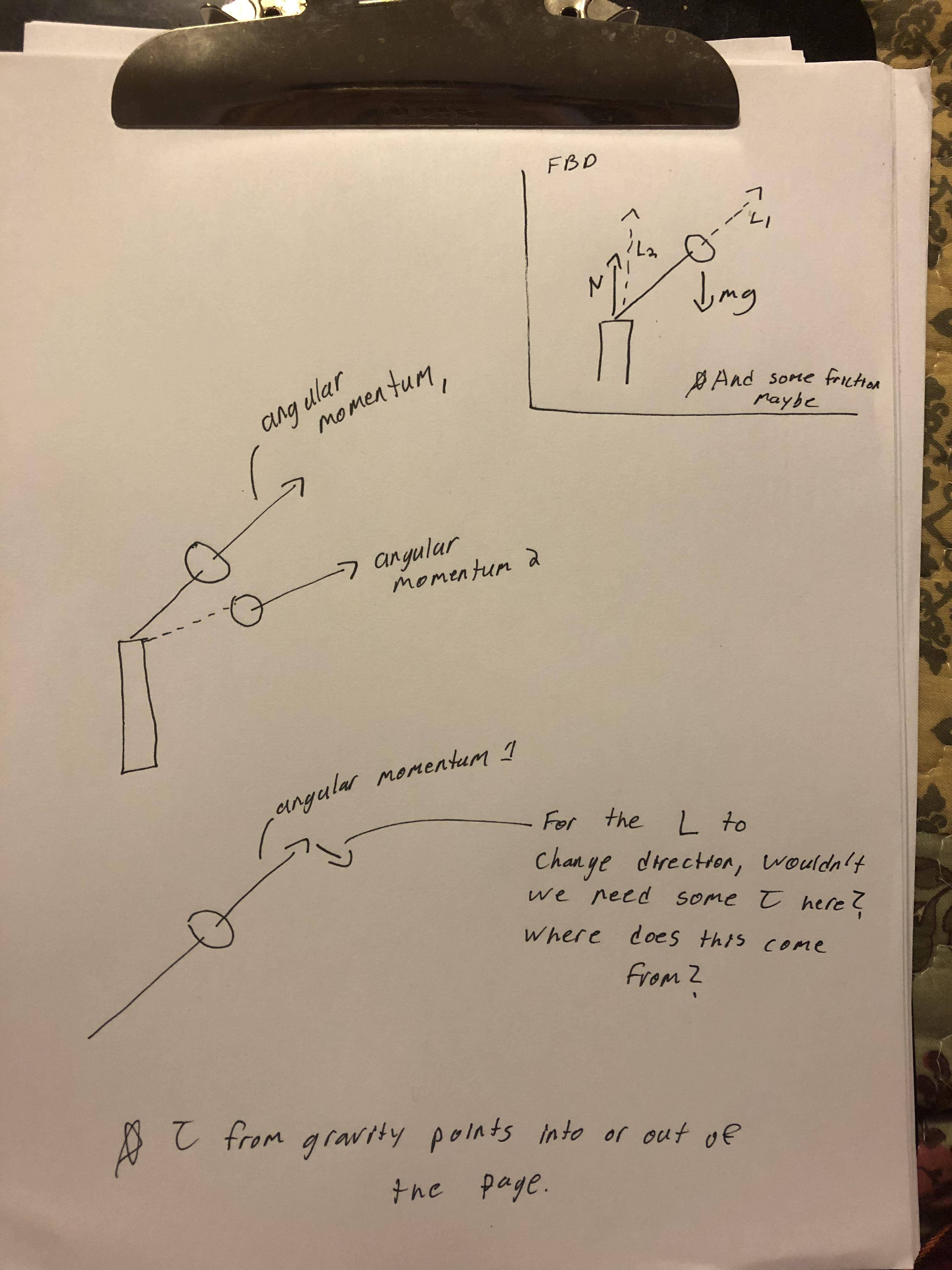 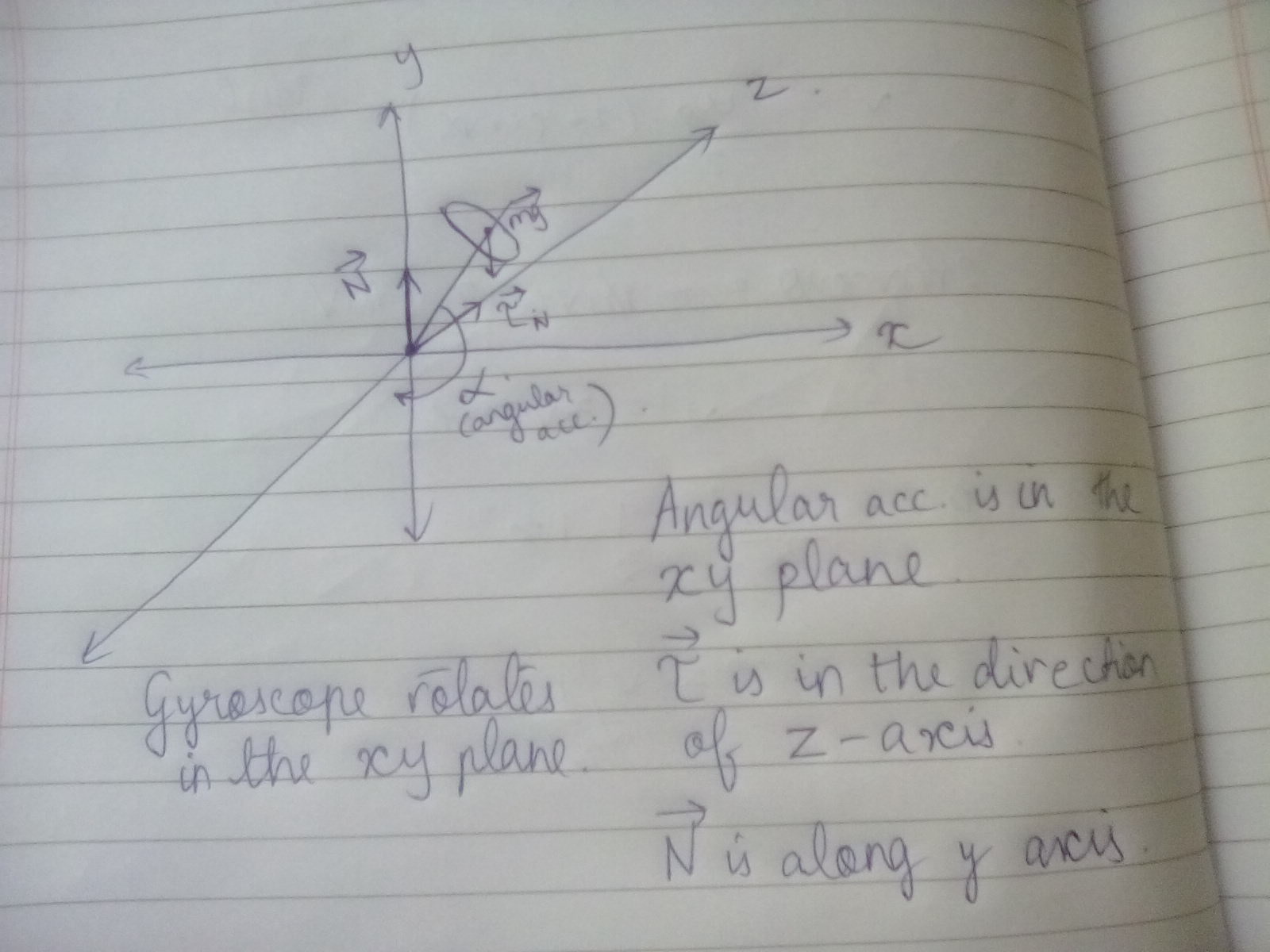 When you are working from the frame of reference of the center of mass of the gyroscope , which is at the center of the disc, the torque due to gravitational force is zero and when the gyroscope is fully upright even the torque due to the normal force by the ground is zero.This is the case for ideal conditions(smooth floor,no irregularities,no dissipative forces such as friction).

In real world conditions the normal force vector moves around the base of the gyroscope due to irregularities in the surface on which it is kept.So a small torque is produced which slowly tilts the axis of rotation.This torque increases in magnitude as the axis makes a larger and larger angle with the vertical till the gyroscope finally topples.Smaller the angular velocity, lesser is the resistance of the body towards this torque.

Hope this helps!If you need me to give a diagram please tell me.

First: you describe two cases, distinguishing between them, but making that distinction isn't necessary.

The two scenarios you describe:

Here is a circumstance where the slow spinning gyroscope would remain close to upright: when there is only a very small gravitational force, such as when positioned on the surface of an asteroid (so that the gravitational acceleration is only centimeters per second squared.)

Conversely, if you would place a gyroscope in an environment with a far stronger gravity than on Earth then a spin rate that would be sufficient on Earth to remain upright (for quite a while) would be insufficient in that high G case.

The point of view that unites the two cases is the following: it's about the ratio of capacity to remain upright and the magnitude of the force that tends to topple it over.

With that distinction out of the way I move to a more general discussion.

Once the gyroscope spin axis is no longer vertical the center of mass is no longer straight above the point of support, so you get a torgue from gravity that tends to topple the gyroscope. In response to the exerted torque a precessing motion commences.

So if you would try this setup multiple times, each time with a slower spin rate you will arrive at a spin rate where there is not enough time and not enough kinetic energy available for the gyroscope to transition to a precessing state.

When the spin rate is close to critically slow then you really have to scrape the barrel to obtain the necessary energy and momentum. If you have a gyroscope I encourage you to try and find that critical case, and watch it many times.

The transition to precessing motion is not instantaneous. I have discussed the mechanics of that transition in a 2012 answer here on Stackexchange, to a question titled What determines the direction of precession of a gyroscope?

[Later edit]
The following was initially a comment, but it is too long for a comment.
The following may or may not be relevant to your case. There is a widespread overgeneralization that goes something like this:

That is why it is crucially important to try a range of spin rates, down to spin rates where the gyroscope is just barely able to get to the required precession rate, the case that I referred as 'the critical case'.

If you understand all of the motion that you see in the critical case then you are in a position to understand the motion of the gyroscope in all cases.

Not the answer you're looking for? Browse other questions tagged newtonian-mechanics classical-mechanics angular-momentum rotational-kinematics gyroscopes or ask your own question.

1
Space Rocket Lift Efficiency and the Gyroscope?
15
What determines the direction of precession of a gyroscope?
0
Which force acts as centripetal force on gyroscope?
3
Gyroscopic Force/Torque of a Constrained Wheel
2
Gyroscope design: does extra mass towards the axis of rotation help or harm the gyroscopic effect?
7
Feynman's disk paradox used as a gyroscope?
0
How to relate spin speed and time in which a gyroscope falls beyond some angle?
0
Is it possible to understand the Gyroscope Effect Intuitively?
3
Confusion about what happens when the rotating axis of a gyroscope is rotated