Where do electrons in electricity come from?

Where do the electrons come from when an electric generator is making electricity? Is from the air? Would a generator work in a vacuum? Electrons have mass so where would they be pulled from if there is nothing?

One can get electrons ( negative charges) and positive ions in static electricity. It demonstrates clearly that the neutral atoms are not indivisible. Friction can supply the force to extract electrons and leave the ions behind with positive charge as happens often when walking on rugs. 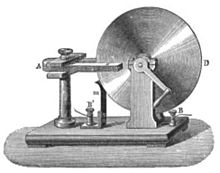 Faraday disk, the first electric generator. The horseshoe-shaped magnet (A) created a magnetic field through the disk (D). When the disk was turned, this induced an electric current radially outward from the center toward the rim. The current flowed out through the sliding spring contact m, through the external circuit, and back into the center of the disk through the axle.

it is the electrons in metals that are being manipulated by the magnetic forces in the design, again separating the charges into an electron motion and positive ions. Metals have very loosely bound electrons which collectively belong to the Fermi sea and can generate the current of the electric generator.

A conducting material is one through which electrons are free to flow.

A voltage is a difference in electrical potential energy per unit charge -- if I have a 10 V source, and I let +1 C of charge flow from the positive terminal to the negative terminal, I will have imparted 10 J of energy to that charge. An electrical generator generates a potential difference between two terminals (either as DC Voltage or as AC Voltage, usually). In common household appliances, this voltage is attached to a wire, and the electrons in the conducting wire are what the potential energy in the battery is transferred to.

Not the answer you're looking for? Browse other questions tagged electricity electrons electric-current or ask your own question.

11
Where do all these electrons come from?
2
In a circuit, does a battery create electrons which it 'injects' into the copper wire?