If a satellite speeds up, does that make it move farther away or closer?

If a satellite is in a stable circular orbit and goes about 41% faster (escape velocity) then it leaves its host forever. I get that. However, what if it speeds up by less than 41%?

Intuitively, it would seem to make the satellite move farther away from the host and thus enter a higher (more distant) orbit.

So, if a satellite speeds up then the stable orbit would be closer to the host, not farther away. What am I missing here?

The parameters of stationary orbits depend on the energy and orbital momentum. For circular orbits, we have a simple relationship for orbital velocity and orbit radius $v^2 =\frac {GM}{r}$. It follows that Venus moves faster than Earth, and Mercury moves faster than Venus. However, for elliptical orbits, the speed does not depend only on the radius. Maneuvering with the increasing speed at a given point of the orbit leads to a change in the shape of the orbit. For example, a circular orbit becomes an ellipse, parabola, or hyperbola. Figure 1 shows examples of maneuvers with a transition to an elliptical orbit (the speed increases by 30%) and a parabolic orbit (the speed increases by 41%). 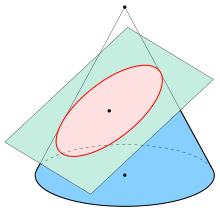 What you are missing is that as the satellite moves farther away from the Earth, it slows down because of work done by the gravitational field.

Since you have given the satellite more total energy (kinetic plus potential) and because the total energy of a bound orbit is $-GMm/2a$, where $a$ is the semi-major axis, then to increase the energy (make it less negative), $a$ must increase.

For a tangential $\Delta v$, the resulting orbit is an ellipse with a perigee at the point where the velocity was added to the satellite. This is because both energy and angular momentum are conserved - when the satellite returns to the same radius it must have the same tangential velocity (to conserve angular momentum), but then cannot have an extra radial velocity component because that would change the total energy. This is a Hohmann transfer orbit.

On the other hand, a radial impulse adds energy but does not change the angular momentum. The result is an elliptical orbit with a larger $a$, but with a perigee closer to the Earth. The satellite moves outwards first but then falls back. When the satellite returns to the same radius then the tangential part of its velocity must be the same as before the impulse, but to conserve energy there must be an inward radial velocity taking it closer to the Earth. i.e. a more eccentric ellipse is produced than if the same impulse is given tangentially.

An orbit of a mass $m$ in the Newton potential of an immobile (for simplicity) mass M can be characterised by two constants of the motion energy, $E=mv^2/2-GMm/r$ and angular momentum L. E fixes v as function of r and L subsequently its direction. For a circular orbit v and r are constant. The increase r for a circular orbit you first need to boost the speed. The orbit becomes elliptical and r varies in time. At the desired r you then give a second boost to set v to the value and direction belonging to a circular orbital of that r. So you increased the speed (at least) twice but the kinetic in the end decreases. The extra kinetic energy was converted into potential energy.

Since the stable velocity v for a given orbital radius $R$ is given by $v = \sqrt\frac{GM}{R}$, I would assume that the satellite spirals outwards at an accelerating rate. Since its velocity is greater than the stable velocity for that orbit, it will start to increase the radius of that orbit. As the radius increases, the magnitude of the gravitational force decreases, and thus the rate of spiraling increases (therefore, an accelerating spiral). I'm not sure myself either because this would also imply that the satellite will eventually leave the host, but this is my best guess.

Not the answer you're looking for? Browse other questions tagged newtonian-gravity orbital-motion satellites or ask your own question.

4
Is the fuel burn for a satellite launch affected by the position of the moon relative to the launch site?
4
Reasons for decaying orbit for satellites and spacecrafts
4
How are orbits made stable?
1
Why do satellites settle into elliptical orbits?
2
Can a satellite have one axis horizontal to its host, and spin about that axis?
1
Will a satellite escape from the bounds of Earth's gravity if its orbital velocity is increased to escape velocity?