How is weight dispersed among multiple points?

I was recently viewing remembrance photos from the 1995 bombing of the Alfred P. Murrah Federal Building on MSN news where slide nine shows a photo of firemen teaming up to carry a $40'$ steel bar weighing $1,000lbs$. 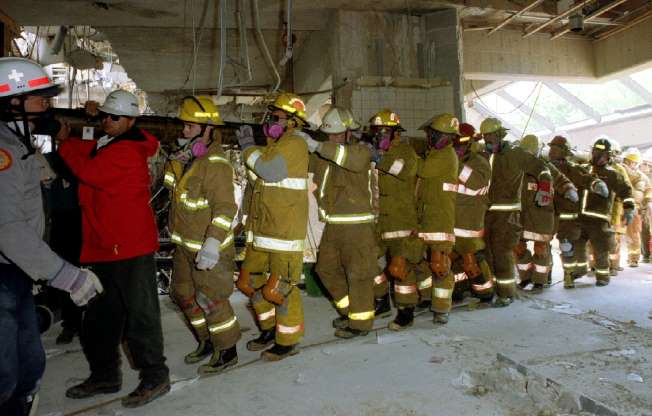 This got me thinking; I've participated in log runs that simulate such feats with telephone poles, though these are usually limited to $5$ to $10$ people per log.

I have a few questions related to this topic, and I believe (probably horribly wrong though) the math would be simple for the weight felt by each person while carrying the object:

For the calculations, we can assume all persons participating meet the criteria of a perfect test:

It can be assumed that all conditions that provide any type of inconsistency will never occur ($+50$) bounty if you can provide explanations for how impactful these inconsistencies are.

Out of curiosity, how do you calculate how much weight each person involved will feel when:

The most useful theoretical model is probably a "Winkler Medium": imagine a rigid rod resting on row of springs. Each spring obeys Hooke's law: $F=kx$, where $F$ is the force applied by the spring, $x$ is the distance the spring is compressed downward, and $k$ is a constant for each spring, sometimes called the "stiffness". If each spring has the same constant $k$, then the force in each spring will be the same, as you noted above. But now let's consider the case where they aren't all the same.

A weaker (technically, less stiff) spring will have a lower value of $k$, so it applies less force for a given amount of displacement. To equilibrate the total weight, this force must be taken up by other springs. Similarly, a stronger (more stiff) spring will have a higher value of $k$, taking more force, so the others take less. But now we can calculate how much. Because if the weight is rigid, all the springs have the same value of $x$.

And so the force in any given spring is

Now back to reality: people aren't springs. So what determines how much force an individual must exert? The answer is, the individual chooses it. If they push harder with their hands, or try to stand up straighter, they take more of the load, and others take less.

Now, to your specific questions:

Not the answer you're looking for? Browse other questions tagged newtonian-mechanics mass statics weight or ask your own question.

0
The physics equation for a perpetual seesaw
3
How can one conclude upward force is related to tension in this question?
2
force required to lift a series of weights suspended from frictionless pegs
1
Apparent weight and true weight
0
Weight of objects
1
Teeter Totter Team Building Game