Why the lens is pushed to the right after light goes through?

I am asking myself why the lens must be pushed to the right in the following scenario: (image coming from Atoms and Sporks' nice video https://www.youtube.com/watch?v=UAmdoOX3870&t=327s)

This can be explained based on the fact that momentum changes after the collision with the lens, meaning that an external force is exerted on the lens (Newton's second Law for momentum):

NOTE: I am going to work out the most basic example I can think of before dealing with the original question:

Assume that the magnitude of the velocity of the ball after the collision is the same.

Question 1. What is the force exerted on the ball?

My whole work is based on the fact that an external force causes a change in momentum. This can be understood as: 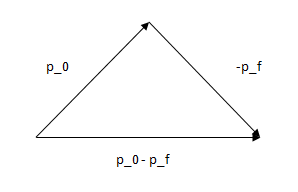 Then, based on the diagram above, the force exerted on the ball by the box is:

This makes sense because the force points to the left.

Question 2. What is the force exerted on the box?

By Newton's third law we know that the force exerted on the box by the ball is equal to $F$ but with opposite sign. This also makes sense; the box is pushed to the right.

If you apply this reasoning to the original question you can also explain why the lens moves to the right.

However, in the lens' case we are dealing with light. Am I somehow being sloppy with my explanation? How can I improve it?

In order to speak of impulse of light, we need Einstein: According to Special Relativity, a photon of energy $E=h\cdot\nu$ has an impulse $p=\frac Ec$. In your image, it looks like the light is refracted in varying angles, let's say the typical angle is $30^\circ$, so inspired by $\sin30^\circ=\frac12$ we boldly take $\frac12\frac Ec$ as horizontal change of impulse. Summing over all photons in a time unit (and dividing by the time unit), we obtain a force $$ F\approx\frac12\frac Pc$$ where $P$ is the power of the light source.

Not the answer you're looking for? Browse other questions tagged newtonian-mechanics momentum vectors collision or ask your own question.

2
Finding force exerted in an Inelastic Collision
0
Newton's Third Law and Constant Velocity
0
Momentum and Kinetic Energy Conservation in Inelastic Collision
4
Average Force vs Net Force
3
Is it right to consider an average force over time rather than an impulse?
1
Why isn't there an analogy for $\vec F = \frac{d \vec p}{dt}$ for $f_{mag}$?
1
Where is the momentum going?
0
Conservation of momentum: Collision involving Tenis ball on top of Basket ball