There are a few important points to make before I attempt an answer. The first is just a point about terminology: you have to be careful to distinguish between energy and (angular) momentum. They are not the same thing - they have different units - and so it doesn't strictly make sense to talk about "draining energy from Earth's angular momentum", since it's impossible to convert one of those quantities into the other. This doesn't mean it's a bad question, it's just that you have to be careful to understand the difference.

The main point is that if you want to generate energy by decreasing Earth's angular momentum, you have to transfer that anglar momentum somewhere else. One place to put it is the Moon, which is effectively what happens when you extract energy from the tides. (The moon orbits the Earth more slowly than the Earth rotates, so their angular velocities around the centre of the Earth are different.) However, it's difficult to imagine how the flow of angular momentum from the Earth to the Moon could be sped up.

However, there is another way you could do it, and that's to launch things into space. If you can get mass far enough away from Earth then it will have a lower angular velocity, and so in theory you could generate useful work by transferring matter from Earth's surface to deep space.

But the question is how you could do it. Launching stuff in rockets won't do the job, since it takes loads of energy to accelerate things to escape velocity, and there's no practical way to get it back. However, with a space elevator it would be different. Imagine a space elevator that's so long that the centrifugal force at the counterweight end is much larger than $1g$. You have to expend some energy lifting mass up to the zero-g point, but this will be more than outweighed by the energy you can gain by letting the mass power a generator as it moves from the zero-g point to the counterweight. Once it gets there its velocity will be enough to escape the Earth's gravity well and you can just let it go, sending the lift back to collect the next mass.

If you do this repeatedly you will have a net gain of energy, just from sending garbage into space, and it ultimately works because it transfers angular momentum from a region of high angular velocity (the Earth) to one of low angular velocity (objects moving in space far from Earth). However, there are enormous practical issues that would probably prevent it from ever being done. Aside from the strength of cable needed, the angular momentum will be transferred not directly from the surface of the Earth but from the whole length of the cable as the mass moves along it, which will make it swing around like crazy unless it can somehow be made to behave as if it's rigid. But nevertheless, it's possible in principle.

Come to think of it, if we're coming up with crazy schemes that would only work in principle, I guess you could build a rail track around the equator of the Earth, put a very heavy train on it, and attach the train via a cable to the moon so that it pulls the train along, powering a generator. This would be an effective way to generate work by increasing the transfer of angular momentum between the two bodies, but of course it's pure fantasy.

This is in fact what is powering the tides: the Moon is gaining angular momentum and changing its orbit. However, we have no practical way to speed up the transfer of angular momentum to the Moon, so harnessing Earth's angular momentum in any way other than using the existing tides is completely impractical.

NASA uses this fact to their advantage. Their 'rob' Earth's energy to speed up their spacecraft during launch.

However, we don't have power plants doing that because it is highly impractical.

Edit: Let's imagine that Earth's atmosphere doesn't exist. So we have a big rotating sphere in vacuum we could launch a spacecraft in the direction of rotation, have some turbines 'take' the spacecraft's kinetic energy, let the spacecraft land, and repeat. It's a simplified version of some system. We could even use magnets and Faraday's law (the spacecraft is a magnet) instead of some turbine. 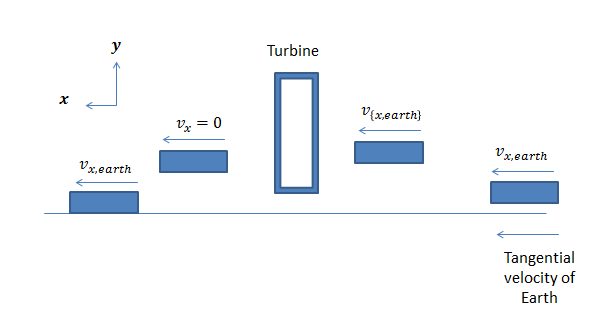 Technically speaking, every time you exert a force on planet Earth, you are accelerating it. Take this case for example:

Earth spins counter-clockwise, or towards the East as it would be observed on Earth. Thus, should you exert a force in the same motion (walking West, applying a force on the planet to the East), you would be increasing the rate at which Earth spins (albeit this is a TINY increase). In the same way, walk to the East and you'll apply a tangential force towards the West that actually slows Earth's rotation slightly.

This behavior would obviously scale up for more massive objects exerting larger forces, resulting in the slight decrease apparently caused by the power plants you mentioned.

Not the answer you're looking for? Browse other questions tagged angular-momentum orbital-motion earth renewable-energy tidal-effect or ask your own question.