Why, precisely, do three elements in a row (iron, cobalt, nickel) show ferromagnetism, but not the elements below them on the table?

The same is true for Neodymium, Promethium and Samarium, right? But like the first three, they are consecutive, not above and below each other. Somehow only elements in those two ferromagnetic 'hot-spots' have the right atomic MASSES, or QUANTITY of electron levels and suborbitals, to produce the effect? The TOTAL NUMBER of protons and electrons creates a strong-enough 'exchange-mechanism' between neighboring atoms to keep enough spins aligned for the ferromagnetic effect to appear?

To my understanding the main factor is how the various orbital levels are populated.

Every orbital fits an even number of electrons. When an orbital is filled the populating electrons are in pairs of opposite electron spin.

When the total number of electrons is relatively small every orbital level is filled entirely before starting to fill a next higher level. Checking the periodic table I see that the column of elements of Lithium, Sodium, Potassium etc. keeps following that pattern; the single unpaired electron is alone in an s-orbital.

When you get to Iron the pattern of electrons populating orbital levels is not straightforward anymore. In that range you get effects where it is energetically favorable to start populating a spatially higher level orbital while a spatially lower level orbital isn't completely filled yet. These circumstances make it possible to have multiple unpaired electrons in the overall population.

A material becomes permanently magnetized when the following conditions are met:

In the case of a permanent magnet a considerable amount of effort is necessary to eliminate that permanent magnetization. You need to overcome a threshold. Heating up a permanent magnet will do it. Above a particular temperature the thermal motion of the atoms is so violent that it can overcome the effect that keeps the magnetic orientation of constituting atoms aligned.

So there are multiple components to the physics of a permanent magnet. You need unpaired electrons in the constituting atoms, and also a crystallisation form that assists in bunches of atoms reinforcing each other's magnetic orientation.

From a deeper point of view, it has to do with the band structure of elements. If you plot the density of states versus the energy, you find graphs like these: 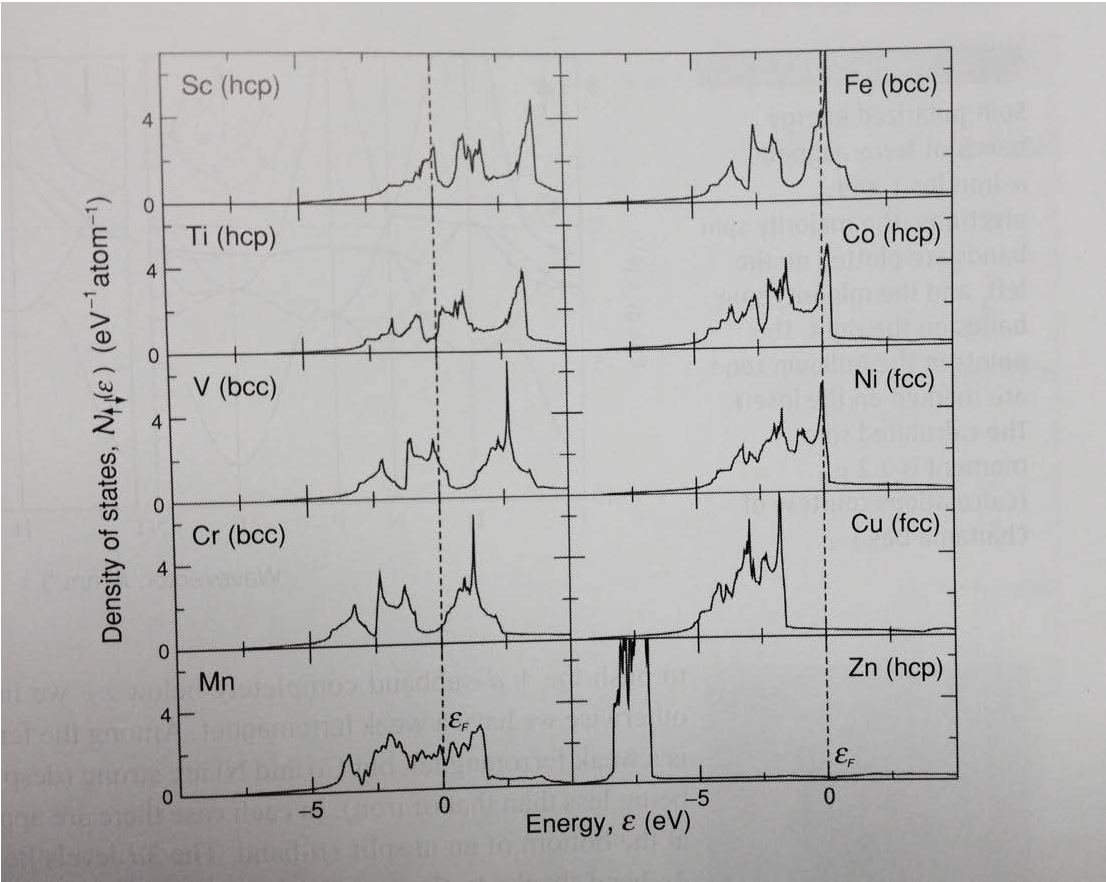 This is like the band structure of the lattices that these elements form, but with energy on the horizontal axis instead of vertical.

The Fermi Level, $\varepsilon_F$ is the key quantity. Only the electrons close to it contribute to magnetism, due to Fermi-Dirac statistics.

So, check that only Fe, Co & Ni have a peak on the Fermi level. That means that those levels are populated, and so they can present ferromagnetism. On the other hand, copper has no longer a peak next to the Fermi level. So, altough the probability is high, there are just no states around there, so there is no possible magnetism.

So, the question reduces to why those elements have such band structures. It has to do with the quantum nature of the elements: electronic configuration, and the lattice types they form.

Not the answer you're looking for? Browse other questions tagged electromagnetism atomic-physics quantum-spin elements or ask your own question.

51
Why do electrons occupy the space around nuclei, and not collide with them?
10
Why does magnet attract iron but not other metals?
1
particle exchange versus spin
0
Why is the transition from the $3s$ state to $3p$ state in nitrogen observable in the emission spectrum but not in absorption?
2
Can black holes interact with the weak force? (I.e., is this a reasonable expectation?)