How does the Penrose diagram for a spinning black hole differ in realistic scenarios (formed by stellar collapse)?

The Penrose diagram for a non-spinning Schwarzschild black hole is 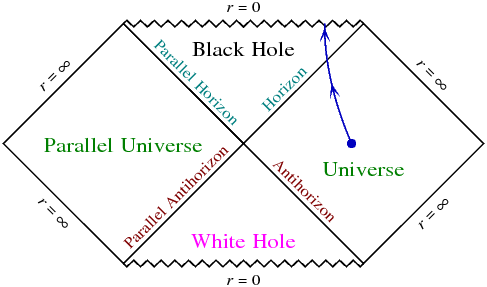 Notably, there is a second universe "on the other side" of the black hole. However, actual black holes form by stellar collapse, and the collapse process leads to a different Penrose diagram: 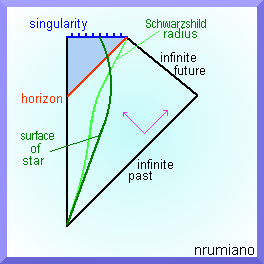 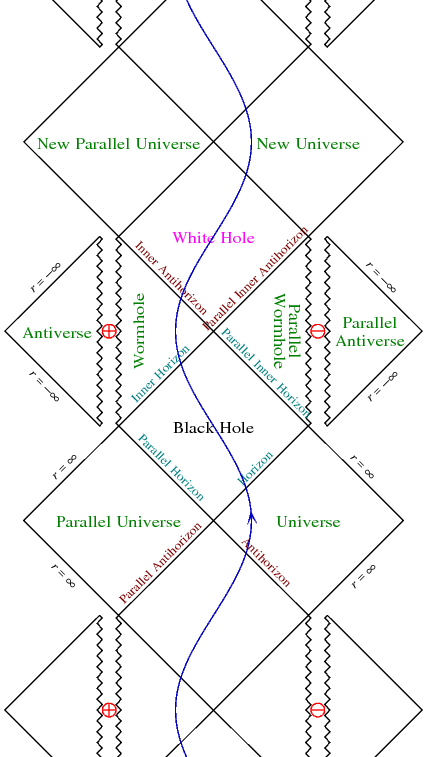 The Kerr spacetime has two horizons, in natural units $r_\pm= M \pm \sqrt{M^2 - a^2}$ where the angular momentum is $J = aM$. $r_+$ is the regular event horizon. Inside of that is $r_-$, where you can begin navigating to leave the black hole and enter an entirely new universe. (You can also pass through the ring singularity, or the "ringularity", and enter an "antiverse.")

My question is, what is the Penrose diagram for a realistic black hole that forms via stellar collapse, and not an idealized "eternal" Kerr black hole? What happens to the parallel universes, $r_-$, and the antiverses? Do any of these features remain?

Your question basically boils down to a recognition of the following fact:

This means that for rotating BHs (as well as charged and nonsingular BHs), if we want a full Penrose diagram, we need to confront a difficult question:

Most people agree that the BH evaporates by emitting Hawking radiation, but no one agrees on the correct semi-classical spacetime to model this process (google "evaporating black hole spacetime", e.g.). Moreover, not everyone even agrees that Hawking evaporation is the dominant process (popular alternatives include, e.g., remnants, quantum bounce models, mass inflation instability).

The good news about this is that we should have had to confront this anyway: if BHs evaporate the eternal diagram you drew above is wrong (at the top) anyway.

The bad news is that we can't say what the correct diagram is, we can only postulate some ideas about what a reasonable diagram might be.

Here is one toy-model possibility, assuming that the BH forms from a collapsing star, then evaporates by emitting an outgoing burst of Hawking radiation from just outside the trapping horizon, while absorbing a burst of negative mass. An evaporation model with ingoing/outgoing fluxes of negative/positive energy like this is motivated by the DFU stress tensor for Hawking radiation. 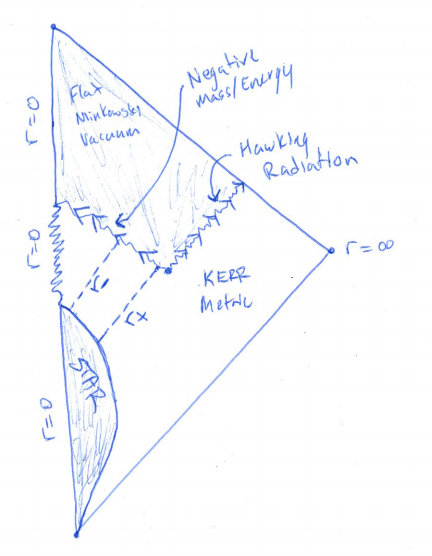 If this was for a charged nonrotating BH, which has a similar causal structure, this would be pretty satisfying. Then we could say:

Unfortunately, for the rotating BH, this only represents the $\theta=0$ axis, so there are problems:

It is not obvious how these issues associated with rotation should be resolved, or even that the interior metric has to be exactly Kerr, since:

What's more, regardless of whether this BH is spinning or charged, it has some weird bad properties:

One way to try to resolve all of these issues at once is by assuming that instead of a singularity, BHs have an extremely tiny, extremely dense core. The assumption is that classical GR holds until densities and curvatures reach the Planck scale, at which point Quantum Gravity takes over the dynamics. It might sound like this violates the singularity theorems, but it doesn't: the energy conditions required for singularity theorems to hold are already violated by the Hawking radiation, and definitely can't be assumed to hold a priori in quantum gravity. This point of view is not widely accepted, however, although personally I think it should be.

That assumption results in the theory of nonsingular (or "regular") BHs, see e.g. nonrotating and rotating cases. The rotating variety still have some technical issues, but if some good rotating nonsingular metric does exist, then the diagram would:

Like I said, this is conjecture, since the right metric for this hasn't been discovered, as far as I know.

So that's my point of view of what this diagram probably should look like, but, as I've pointed out, there may be many others. My assumptions were that Hawking evaporation dominates the late time dynamics, and that the ingoing/outgoing radiation is a reasonable semiclassical model for the evaporation process.

If anyone has an alternative reasonably self-consistent diagram for this process, I think it would be very interesting to compare. Trying to sort out these "astrophysically relevant" BH scenarios seems like a good way to weed out some of the BH nonsense...

The Penrose diagram for a spinning star will in all likelihood look remarkably similar to the one you show for a spherical (Schwarzschild) collapse:

However, many of the features are more subtle (and subject of ongoing debate). I'll discuss the main regions in order.

Insider the star - This part is easy. Assuming the matter distribution in the star is regular, the metric inside the star is regular. For the Penrose diagram this means that this region will look like a patch of the trivial Minkowski space diagram.

Outside the star and outside the outer horizon - It is very hard (in not impossible) to find a matter distribution for a collapsing star that leads to exactly the Kerr metric for the external solution. However we do know a couple of things about this solution: 1) It is asymptotically flat (fixing the Penrose diagram at future/past null infinity) and 2) after the star passes the outer event horizon the outer solution will rapidly (exponentially) approach a stationary Kerr solution. (This last bit follows from the black hole "no hair" theorems.

the inner horizon - The inner horizon in the Kerr solution is a so-called Cauchy horizon, which means that as you pass through it you are exposed to the entire history of the universe outside the black hole. This also means that all signals reaching you will be infinitly blue-shifted. This has led to the conjecture that the inner-horizon in the Kerr solution is actually unstable with an outside perturbation leading to its collapse. This conjecture is closely related to the strong cosmic censorship conjecture, which says that timelike singularities (like in the interior region of Kerr) should not be able to form in nature.

The exact status of this conjecture and the exact nature of the resulting singularity is subject of ongoing debate. The current status seems to be that for generic perturbations the curvature will diverge at the inner horizon. However, if you allow metrics which are not twice differentiable (not $C^2$) you can still extend the spacetime beyond this singularity. (see Dafermos's website for a nice discussion of the status). In physical terms, I believe this can be summarized roughly as general relativity must breakdown at the inner horizon, but a theory of quantum gravity may not.

Put together this three statements lead to a Penrose diagram that is qualitatively similar to that of a collapsing spherical (Schwarzschild) spacetime.

Not the answer you're looking for? Browse other questions tagged general-relativity black-holes spacetime causality kerr-metric or ask your own question.

16
How can a singularity in a black hole rotate if it's just a point?

9
Kerr solution for finite collapse time
8
Is it expected that all stellar black holes will be spinning near the maximum allowed $\omega$-velocity?
8
Spacetime diagram of a collapse of a rotating star
10
Closed timelike curves in the region beyond the ring singularity in the maximal Kerr spacetime
11
Physical motivation for mathematically extending solutions to Einstein's equations
7
For the Kerr metric, does taking the maximal analytic extension commute with taking the zero-spin limit?