Would equal balance at same height when hung on a balance?

This is based on a question from the gravitation course on Brilliant.

As you can see in the diagram below, we have 2 weights hung on a pulley. It is given that: 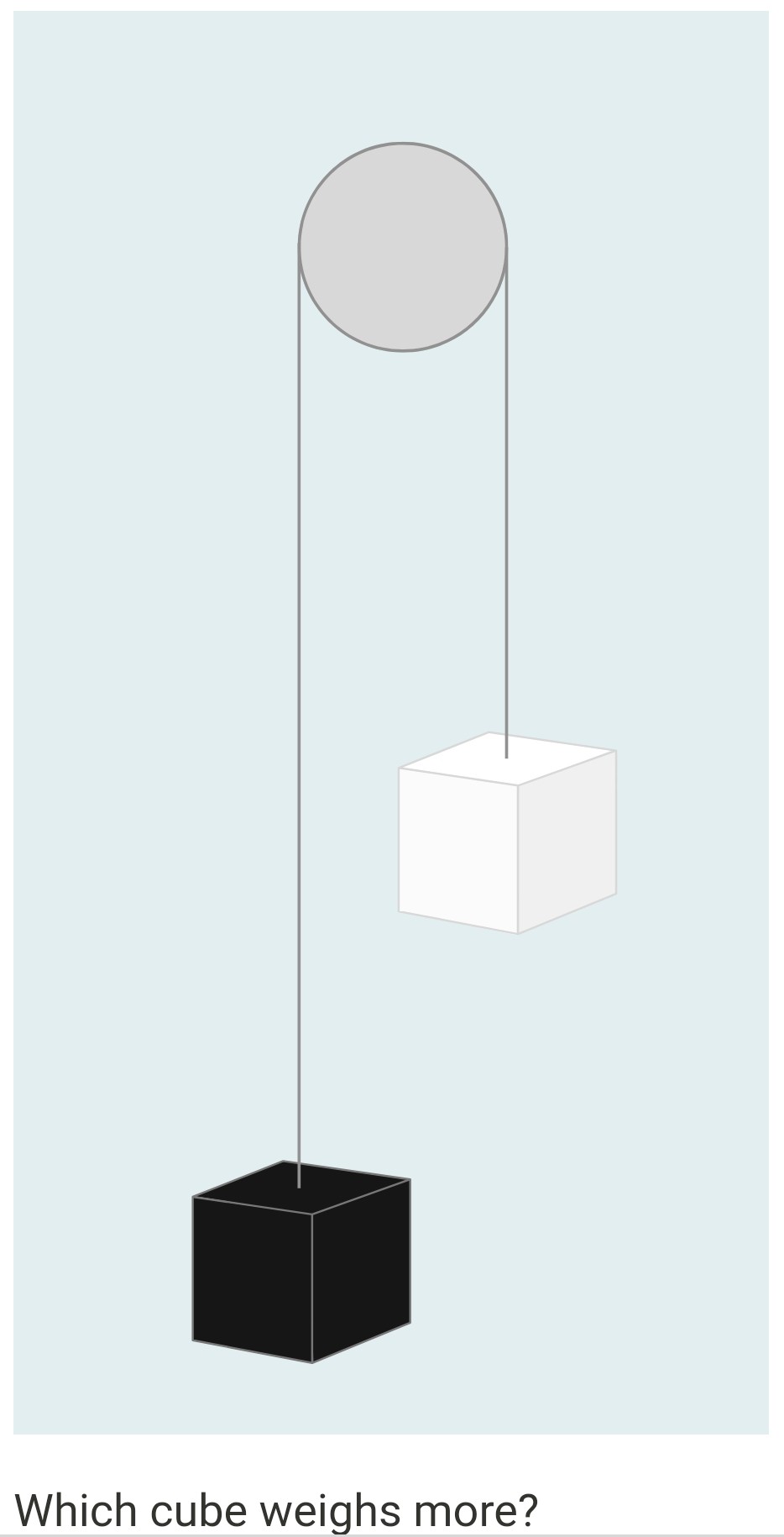 The question was whether they both have equal mass. And the answer is Yes.

The black cube is lower than the white one. Wouldn't they balance at same height if they are equal mass?

A free body diagram of each cube shows the force of gravity acting downward and the tension in the string acting upward. Since the masses are not accelerating, the net force on each cube is zero. This does not depend on the vertical position of the cubes (provided, of course, that the force of gravity is constant over the range of vertical positions).

Don't old analog weighing devices rely on both being at the same level to ascertain equal weight?

Before talking about the old balance scales, let's turn the pulley and string into a balance scale (it would be a poor one since the moment arms are relatively small). Again we will assume no friction at the pulley. Let the black cube be resting on the ground and the white cube be hollow and of less mass than the black cube. The black cube is in equilibrium because the sum of the ground reaction force plus the tension in the string equals the downward force of gravity.

Now let's slowly pour water, sand, etc. into the white cube while carefully observing the black cube. As soon as we see "daylight" between the bottom of the black cube and the ground, and assuming we didn't add to much water or sand to cause the black cube to accelerate upward, the upward tension force in the string once again equals the downward force of gravity on the black cube and it is in static equilibrium. This assumes, of course, no friction between the pulley and the string which would resist the counterclockwise moment.

So why when they actually use balance scales to determine the mass do they try to get the masses to be of equal height? I'm not particularly verse on these devices, but it is my understanding that before making a measurement they zero the balance (even the height of the masses) to account for any friction possibly due to build up of dirt, rust, etc.. I read that this is what they do with doctors balance scales. They calibrate them so that the beam at the right is centered between the two stops. Then when making the measurement, they slide the masses until the beam is once again centered. But if there were absolutely no friction, as long as the beam comes off the lower stop it is in equilibrium and there would be no need to center it between the stops.

I think you are perhaps confusing this pulley arrangement with a beam balance.

Not the answer you're looking for? Browse other questions tagged newtonian-mechanics newtonian-gravity mass free-body-diagram string or ask your own question.

1
How did tension developed in a string when two equal and opposite forces are applied on the same body?
0
Angular equilibrium on a see-saw
1
Tension in an atwood machine
0
How is tension the same?
0
Why isn't the apparent weight of a body in a fluid equal to the buoyant force? Why does buoyancy reduce it instead?
1
Modelling implication of an inextensible string in a pulley system?
1
Monkey and Banana problem
0
Elasticity Mechanics Problem