My question is regarding the direction in which cathode rays bend in a magnetic field.

My book states that : 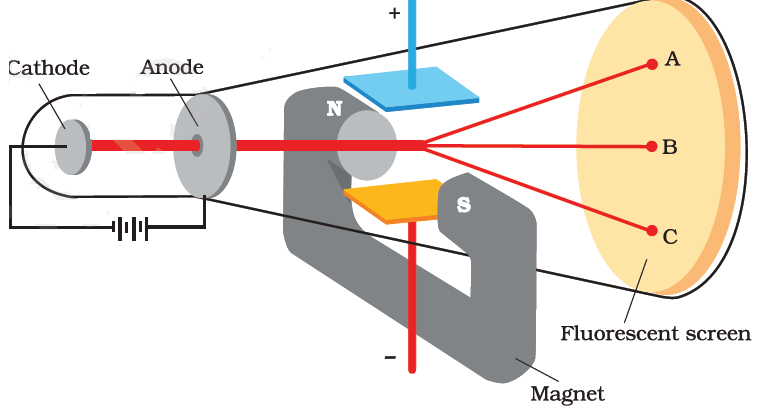 Applying this rule I found that the electrons should hit the cathode ray tube at A in a magnetic field . But in the book it is given that they strike it at C.

Edit : I am adding a picture which makes it clear how I applied the rule. 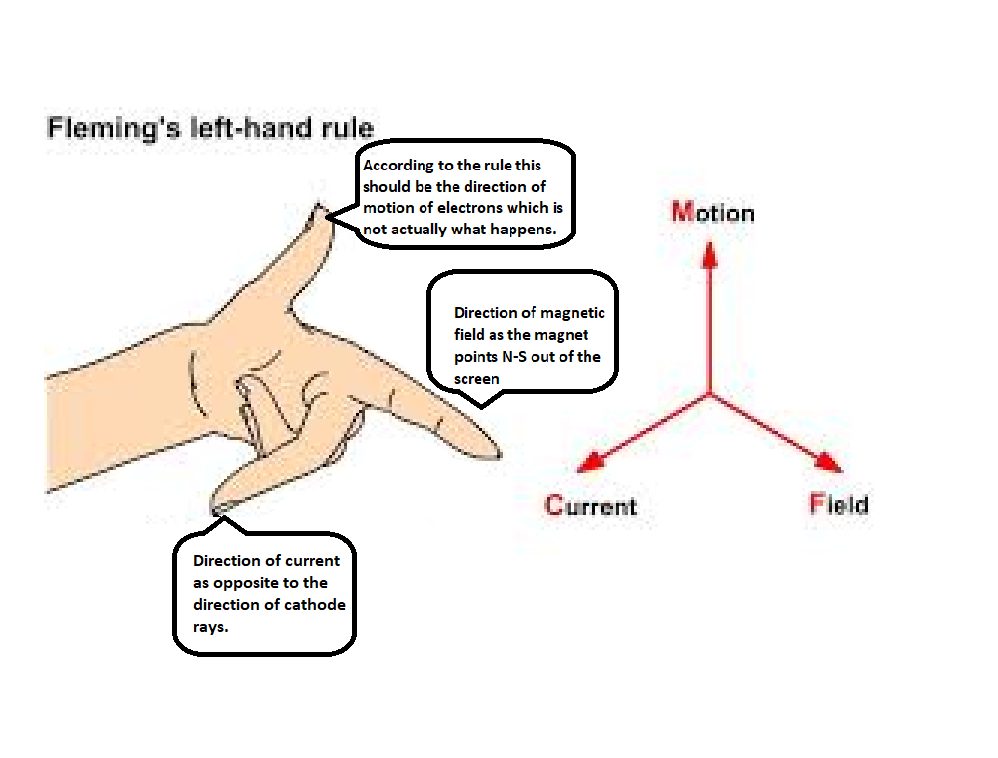 Please explain me where I went wrong . Thank you.

The rule applied is correct but because electron is negatively charged your actual answer will be exactly opposite of what you would get. The answer that you got is correct for a positively charged particle.

All this confusion wouldn't have happened if they got it right about 300 years ago, when they rubbed a sheet of glass & got a spark and assumed the electricity was jumping off instead of electrons being rubbed off & jumping back on. By the time they realized they had muffed it (in the 19th century), it was too much trouble & too expensive to rewrite all the papers & republish all the books, so they still said current goes from positive to negative but electrons go from negative to positive. The way I prefer to remember it is, that, if the electrons go CLOCKWISE around a coil, the north pole it produces faces towards you, & the electrons around the atoms in the core go clockwise in it, or a magnet with the north pole facing you. If you pass an electron beam, or electron current (real current) through a wire in front of it, the wire (or beam) is pushed to the side where the electrons travel in the same direction as the electrons in the coil (or around the atoms in the magnet). Or otherwise, use the right hand rule for electron current. 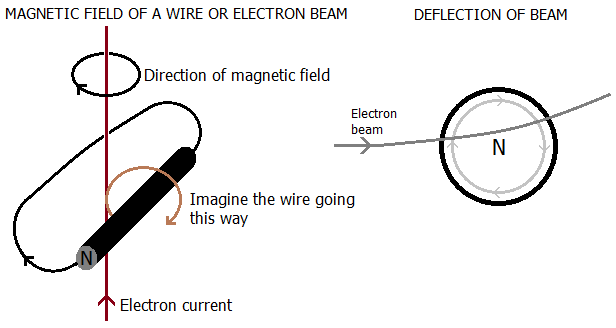 Book is right because it says the magnetic field is in inward direction.so, while pointing your index finger inward,the thumb faces down.

I believe the force by Fleming rule is correct for POSITIVE charges, while electrons are negative and suffer force in opposite direction.

otherwise we can use the left hand with opposite direction, like in photo ;)

Contrary to everything you have learned about the so called “cathode rays”, I assert something completely different about them. Please look at this drawing:

This is a kind of cathode ray tube (CRT), also called Braun tube, which can be found in every CRT TV, monitor or oscilloscope. On the left side of the tube is the negative electrode (the cathode) and a little to the right is the positive (the anode), which is in the form of a metal disk with a small hole in the middle. To the right of the anode there are two additional electrodes which, when connected to a high DC voltage, deflect the beam from its straight line upwards to the positive electrode. The beam itself is actually invisible, but is made visible by adding a small amount of some inert gas into the tube (neon, argon etc.).

The contemporary physics asserts that this is a beam of negative particles, called electrons, traveling from the cathode through the anode and then hitting the opposite wall of the tube. I assert that this so-called “beam” is actually an electromagnetic vortex (EM-tornado).

(a real image of a CRT taken from the Youtube video)

What the author of this answer regards as contradictory in the assertion of moving negative electricity from the cathode through the anode to the opposite wall are two things. The first is of principle nature: one of the basic principles of nature is that the movement is always from the positive to the negative and not contrariwise (please read Why is the charge naming convention wrong?). The second is a matter of fact. Let us examine the nature of electricity around the right part of the tube in the drawing above, in other words, let us examine it in front of the screen of a CRT television, monitor, or oscilloscope - we will always find that the detector shows intense positive electricity.

Before we present our explanation of this phenomenon, let us consider a few more experiments. We place a stiff copper wire on a table. Parts of its length don’t touch the table. Above a wire section that does not touch the table we hold a strong cylindrical magnet with its positive pole down, so that the wire lies exactly under the middle of the magnet. Then we connect a new battery to the ends of the wire so that the positive pole is closer to us and the negative pole further away from us. At the moment of connection we will notice that the wire makes a strong deflection to the left and up. As soon as we turn the magnet over and repeat the same, the wire will make a strong deflection to the right and up. If we hold the magnet again with the positive pole down, now not directly over the wire, but left over it, however still close to it, we will notice that the wire after connecting to the battery makes a jerky movement to the right and down. How is this explained? In the first variant, the permanent magnet “blows” down; the magnetic wind in and around the wire blows clockwise spirally from the plus to the minus pole of the battery; it blows down on the right of the wire, up on the left of it; on the right of the wire both magnetic winds coincide (the effect intensifies), and on the left of the wire they collide (the effect weakens); the wire moves to where the effect only intensifies, namely to the maximum, and that is to the left and up. In the third variant, in which both winds only collide, the wire deflects to where the adverse effect is maximally attenuated or quite ceased, namely to the right and down.

Now, facing a CRT oscilloscope, we let its beam run slowly and uniformly from left to right (visible as a bright dot moving horizontally from left to right in the middle of the screen); then, exactly over the center of the screen, we place a magnet with its plus-pole down. We will notice that the dot moves no longer horizontally, but that it slopes downwards and passes through the center. When we turn the magnet upside down, the dot slopes upwards, passing through the center again. If we compare this observation with what we have just said about the experiment with the copper wire and the magnet, we find the same thing happening in both cases. We conclude that the rotational direction of the magnetic wind generated by the beam in the oscilloscope coincides with that of the wire, as long as the positive pole of the battery is closer to us. So it's also the oscilloscope's plus side closer to us when we stand in front of it.

We explain this phenomenon as follows: the positive electricity radiating from the anode spreads to the right into the broader part of the Braun tube in the drawing above. Since the anode is a disc with a circular hole in the middle, this electricity, with the help of the suctioning minus cathode on the other side of the anode, forms a vortex which is directed to the opening of the anode and continues to the cathode. This electromagnetic tornado is actually the beam that is visible when a small amount of an inert gas is introduced into the tube.

So when we stand in front of an oscilloscope and the bright dot lies still in the center of the screen, then it flows in the tube around the bright dot invisible positive swirling electricity towards us and from the very dot begins a vortex in the opposite direction towards the hole of the anode and onward to the cathode. The bright dot is actually the top of this EM-tornado. (Even with toys that cause a vortex in a water-filled container by means of a small electric motor located at the bottom, it can be noticed that the movement of the water around the vortex is directed upwards, but in the vortex downwards).

The fact that the vortex is deflected to the positive of the two additional electrodes does not contradict this explanation, because I assert that this is not something that can be simply accommodated under the postulate “plus attracts minus”, but rather a positioning of a motion consistent with ambient influences whereby maximum effects are achieved (we could observe something similar in the previous experiment, where the wire was deflected to the left and up while the magnet with its plus pole was positioned over it). For the effect of the vortex to reach the maximum, it is deflected to the positive electrode when additional electrodes are inserted in the tube.

In the above-mentioned toys, the water vortex is fully upright when the electric motor is positioned right in the middle of the bottom of a cylindrical or slightly conical vessel. However, when the motor is displaced to one side of the vessel, the vortex is curved towards the opposite side. In this way, it strives to achieve the maximum effect, in this case to capture the largest possible amount of water and make it spin (YouTube video Discovery Kids Tornado Lab extreme weather toys.Real Tornado Sound Effects). In our case the electromagnetic vortex makes a curve to the positive electrode; so it seeks to capture and spin the largest possible amount of positive electricity.

[ When an air-tornado inclines to one side, then it does it to the side where the air-pressure is higher. Higher air-pressure means more air, so it strives to capture more air, make it spin and thus stay alive. If we imagine the positive electricity as a higher pressure, the negative electricity as a lower pressure, then the EM-tornado inclines of course to the higher pressure, i.e., to the positive of the additional electrodes. ]

It can also be assumed that a non-symmetrical conical glass tube would make the vortex curved even without the additional electrified electrodes (drawing below).

[please see also (in slow motion, let’s say 0.25 of the normal speed) how the vortex gradually position itself in the middle of the bottle in this YouTube video from 2:03 to 2:05].

Another detail indicating that this is a kind of vortex is the shape that the bright dot takes when turning off the oscilloscope. It “dissolves” circularly. Something similar is also notic­eable on the water surface of the mentioned toy after switching off the electric motor.

I am ready to advocate its truthfulness in front of any audience.

74
Why is the charge naming convention wrong?

2
Do Positrons Bend The Same Direction As Electrons In A Magnetic Field?
3
A question about the Thomson experiment
1
Where do electrons come from in thermionic emission?
3
How do electrons in a cathode ray remain in a straight line if they are all negatively charged?
11
Why do electrons move towards anode in the Photoelectric effect experiment?
3
Why is the direction of cathode rays independent of the position of anode?
3
Why ray goes down when applied a magnetic force between it in the JJ Thompson experiment?
0
What direction is current for an electron in both $E$ and $B$ fields?